The young Saavedra joins Sébastien Bourdais for another season.

The team also announced that talented young driver Sebastian Saavedra will pilot the No. 17 KV AFS Racing Chevrolet/Dallara/Firestone machine during the 2014 season.

Vasser and Saavedra participated in an INDYCAR Conference Call to discuss the announcement and the 2014 IndyCar Series season. 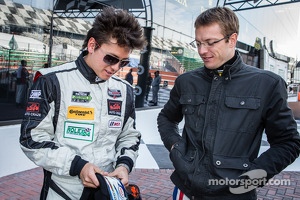 JIMMY VASSER: "Actually started with Sebastian and myself bumping into each other at an airport, I think it might have been La Guardia heading to Toronto. We thought we would keep in touch and see how things progressed, not knowing really at that point where either ways were going to go for next season. Then having discussions with Gary over the wintertime, just general discussions, getting to know each other, really on kind of a friendship basis initially. Then just listening and seeing what was going to happen. We weren't sure what was going to happen with our second car at the time. Just trying to keep all options open.

Things started to progress over the last 30 days. Lo and behold here we are. I think it's a very exciting situation for us. Keeping the two Sebastiens together for a second year, I'm familiar with how teammate situations work, I've been in them before. Usually the first season is a little bit awkward with new teammates. Now I think they've gotten that out of the way. They know how they work together good and how they work together bad. I think that will be beneficial."

Q. Jimmy, what did you see in Sebastian from his running last year with Dragon, in the past with AFS-Andretti and even with Conquest?

JIMMY VASSER: "Obviously with Conquest he came in aggressive. He went through some hardships I think it was early on in his career at Indianapolis. It takes a lot of mettle to do that. Particularly last year, early on, with qualifying in the Fast Six, really kind of being very competitive if not in qualifying form outpacing Bourdais, which to me was very, very impressive.

The speed is there. Everybody knows it takes a few years to kind of get comfortable in the series, really start finding your legs. We expect him to really get into a rhythm. Maybe missed a few tests here, but we're going on to Sebring after this, then Texas and Barber. There should be plenty of seat time for him to get comfortable with the new engineers for him and the team."

Q. Sebastian, you have to be excited to confirm plans for the 2014 season and with KV Racing Technology.

SEBASTIAN SAAVEDRA: "Yes, it's very exciting, something we've been working for for some time, as Jimmy said. To be part of this great partnership between AFS and KV, it's something that makes us proud. Very excited to start the season for me today here in Sonoma. Looking forward to making a very good season ahead of us."

Q. You mentioned you're testing today in Sonoma with the team. I know seat time is everything for drivers, especially this close to the season start. What are your expectations for the day and possibly if you could comment what your expectations are for the season.

SEBASTIAN SAAVEDRA: "I think for today, just try to take a little bit of the rust off. It's been a good off-season. Daytona was a great time to try to get back in the car and just to put everything into perspective.

Now we have the opportunity to be here in Sonoma. It's already working with all the cylinders for the season together with Bourdais again. Just looking forward to a great season.

We finished very strong last year. I think from everything I learned, it's time to put everything into practice and look for those great opportunities in the 16 races ahead."

Q. Sebastian, now that you're moving up the grid a little bit what do you think of the opportunity to use this equipment and to move up to work with Sebastien (Bourdais) for another year?

SEBASTIAN SAAVEDRA: "Very excited. As Jimmy said, it's very important to have some sort of relationship going with your teammate. I think we were able to build that last year.

When we get to work together and really develop a car, know what we like, what don't we like, I think it's a huge help when you're talking to your engineers.

I think joining forces again with a great team that has had a history, of course having the mentality of securing an Indy 500 last year is even more motivation to keep building that strong asset and even look for the championship.

So having the tools, the energy, the mentality, I think it's all there."