The luck was on Tony Kanaan's side at 97th Indianapolis 500

Indianapolis, IN (Sunday, May 26, 2013) - Tony Kanaan, driver of the No. 11 HYDROXYCUT - KV Racing Technology - SH Racing Chevrolet/Firestone car wins the 97th Indianapolis 500. Kanaan, who started 12th, moved quickly through the field and led early and often. It was clear to everyone that he was determined to break-through and get the win that has eluded him in his past 11 starts. It seemed destined (team co-owner Jimmy Vasser used to drive the number 12, this was Kanaan's 12th start, he was starting 12th and had the 12th pit box) it seemed clear that luck was on his side today.

Vasser felt the luck in the air as well. "Alex Zanardi brought us a little luck today," he said. "He gave us his gold medal from London. He said 'rub this all over the car it has special powers'. Tony (Kanaan) took the medal to his motorhome for an hour. I just can't believe it... Indy 500... awesome." 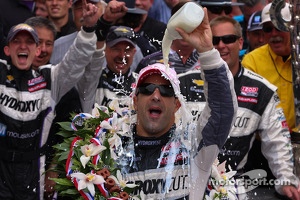 Kanaan was thrilled with the win. When asked "How sweet does that milk taste?" he said:"Very good; very, very good! I can't believe that we did it. We finally did it. And it's been a long shot but it's ours." Kanaan knew what he had to do on the final restart. "I've been there," he said. "I've been in the lead and I knew that's what I had to do and it finally worked. I'm so proud. I'm so proud."

When the yellow came out I started to get impatient for the checkered. "I couldn't believe it," he said. "I'm like man how many laps to go?" It was two to go. I said "that's it. I'm going to have to say that last lap was the longest lap of my life. I wanted the pace car to hurry up so bad. I've enjoyed it. Again, we did it."

The fans here at Indy are incredibly special to Kanaan and he would have loved it if they had been able to join him on track to help him celebrate his victory. "I want them to jump in the track and come see me, man," he said. "It's for them! It's for them! I got a little bit of luck today," he continued. "Again, this is for the fans. It's for my Dad that is not here, but mainly for all of you guys. I was looking at the stands and it was unbelievable. Man, I can't believe this. I'm speechless. This is it, I made it. Finally I'm going to put my ugly face on that trophy."

Kevin Kalkhoven, team co-owner, was more than a little pleased with the performance of his driver and team. "It was a hell of a race by Tony and a great job by the pit-crew and the engineers. Tony was confident the whole month of May and he really was in control of the race in his own way for the entire time. It was just a wonderful job by him and the team."

Simona De Silvestro, who drove a solid race today as well, was extremely excited for her teammate. "I'm pretty happy about the day; super excited that Tony finally won his first Indy 500 and that I was his teammate when he did it," laughed the driver of the No. 78 Nuclear Clean Air Energy car. "I think we had a pretty strong car too. It's just unfortunate that we made a little bit of a mistake by running over that hose and got a drive-through. We had a pretty good car on that one stint; but that hurt us a little bit. I think overall the Nuclear Clean Air Energy car was really good and we can build momentum off of this.

Team manager Steve Moore agrees. "It was a great day for KV Racing with Simona putting in a very good drive with great pit stops from the team. She started 24th and was able to move up and finish 17th. Obviously very happy with Tony's result, I couldn't be happier for him. I'm proud of him and proud of the whole KV team. All the hard work they put in throughout the off-season and through the start of the season has really paid off. Just very proud of Tony and the KV team and very excited about the result."

The team's newest co-owner, Imran Safiulla, was excited to be part of Kanaan's win. "I'm extremely happy for the entire team," he said. "They've done a hell of a job all month, for the last few months, and through the off-season. I'm thankful to Kevin and Jimmy for having formed this new relationship; to be rewarded this early is amazing. I'm looking forward to even better things to come... we're going to go win a championship. I'm absolutely elated to have been part of Tony's history of having won this race for the first time. He's done a hell of a job and we're looking for many more good things from him.