Detroit, MI (Saturday, June 1, 2013) - KV Racing Technology started 17th and 19th on the grid for the first race of the Dual in Detroit today after qualifying 17th and 19th earlier in the day for tomorrow's race. Regardless of the poor starting positions, the team was still confident that they would be able to move up through the field during the race and celebrate good results for new sponsor Hippino.com and long-time sponsor Nuclear Clean Air Energy. While it looked like that would be the case early on, neither car ended up having the speed to maintain their advances. 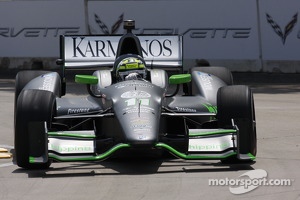 Kanaan, driver of the No. 11 Hippino.com - KVRT-SH Racing Chevy Firestone, was able to gain several positions on restarts and was able to move all the way up to fourth before falling back and finishing 13th. While not the result he and the team hoped for, Kanaan once again proved his ability to make gains regardless of his starting position.

"This was not the result that I was looking for the Hippino.com/Chevy/Firestone car," Kanaan said, "but I was really happy that we were able to help out with this awesome program of team Hippino.com, which raises money for cancer awareness. I can say I gave my best today and that I took the opportunity on every restart to gain positions. But the bottom line is that we did not have the speed to run upfront with those guys. The No. 11 crew will continue to work hard on getting the car where it should be for tomorrow's warm-up and I hope that we can get a better result in race two."

Kanaan's teammate, Simona De Silvestro, driver of the No. 78 Nuclear Clean Air Energy car, had a frustrating day. However, despite finishing 16th today De Silvestro remains positive about her chances for tomorrow. "I think it was a hard race," she said, "we fought hard, but we kind of got squeezed out on the wrong side on the one restart and lost five positions there. That was a bit frustrating, but I think we're kind of ok. We still need a little bit of work for tomorrow, so we're going to go back and open the books again and try to do it better. During the race we learned a lot and that should really help. Hopefully we can improve tomorrow and bring the Nuclear Clean Air Energy home to a better finish than today."

The team is hard at work making changes that they expect will help them get better results in tomorrow's race. Team co-owner Jimmy Vasser expects some big changes. "It was just a terrible day for the setup of our cars," Vasser said. "Both cars were slow, so I imagine there will be some big changes tonight. The good news is that it's a double-header and we've got another chance tomorrow. We've got to come back out with something better than that. I'm a little embarrassed for my team and our sponsors; Hippino came on board this weekend. TK did an awesome job driving; it was obvious on his restarts. He got us up to fourth place at one point, but the car just had no speed in it and he wasn't able to hold it. I'm expecting some big changes tonight on both sides."

While not happy with today's results, team manager Steve Moore thinks the team will be able to come back strong tomorrow. "It was obviously not a good day for the 11 or 78 cars today," he said. "They managed to make some places up during the race, but unfortunately neither one of them had a very good car. We'll make some changes tonight and come back tomorrow strong."

The team will start tomorrow's race in the same positions as today, but anticipate much better results.