Sim Sun BWI De Silvestro, who turned 25 today, qualified the No. 78 Nuclear Clean Air Energy - KV Racing Technology car 19th, but lined up 17th after penalties for unauthorized engine changes were assessed to two cars. She was on the move from the drop of the green flag and was in 10th place when the first of six caution periods occurred. 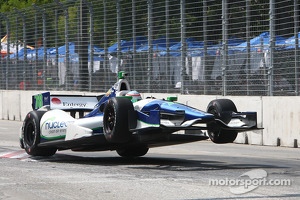 De Silvestro, who drove a smart, patient race, stayed in the top-10 the whole time dropping back only following pit stops. However, it was in the latter stages of the race that she really showed her mettle. After being collected in the second to last of a series of multiple car crashes, De Silvestro pitted to get a new front wing.

She rejoined the contest in 15th place and over the next 17 laps drove with determination and skill making several notable and often daring passes to earn her best finish of the 2013 IZOD IndyCar season.

"I'm definitely really happy with P5," De Silvestro said." It was kind of a crazy race. I don't think we had the fastest car out there, but we had a pretty good call on the pits when we got stuck in one of the wrecks. After that we were able to move forward and had some pretty good restarts. The Nuclear Clean Air Energy car was really good at the end, so I'm pretty happy with it for sure. Not a bad way to celebrate my birthday."

TK Sun BWI Kanaan made history today by making his 212th consecutive start passing KVRT co-owner Jimmy Vasser for the series record. He qualified the No.11 Hydroxycut - KV Racing Technology - SH Racing machine 16th, but started 14th after the penalties. He damaged his front wing on the opening lap, but battled through the problem moving into the top-10 by lap four where he remained throughout the first stint.

Kanaan opened the second stanza with the same wing in an effort not to lose any track position, but shortly thereafter was forced to pit for a new one. The early stop dropped him to 19th, but he fought his way back to 12th before making his final stop, which while a bit early was a solid gamble based on the race conditions.

Immediately following that stop, the first of the series of multi-car incidents occurred. Kanaan managed to avoid all of them and after the last one found himself in second place. From that point on his car began to deteriorate and he could not defend, dropping to seven place where he was when with two laps left in the 75-lap contest he made contact with the wall in Turn 12 ending his race.

"It was a very physical and bizarre race," Kanaan said. "All the crashes on the restarts, all the cars that were involved just made the whole race difficult. I drove the whole first stint with a damaged front wing and still got up to sixth. I was hanging on the whole time and trying to fight through it. We pitted a bit out of sequence and got to the front avoiding all the carnage. After the last restart the car started getting away from me. It got worse and worse and finally I hit the wall in Turn 12."

De Silvestro earned her best finish in three starts at Baltimore surpassing a 12th in the inaugural 2011 event. The talented Swiss driver has now placed in the top-10 six times this year and her first top-five showing. Today's fifth place performance tops a sixthplace finish in the season-opener at St. Petersburg.

More importantly today's result extends her streak of solid results to six races (an oval career-high 11th at Pocono, 10th and 14th place finishes in Toronto, an11th in Mid-Ohio, a ninth in Sonoma to go with today's fifth place showing) that has moved her up four places in the standings from 19th to15th with 278 points.

Kanaan, who had a shot at podium finish today, has a best finish of third in 2011 in histhree races at Baltimore. The 38-year-old Brazilian earned 15 points today and remains in 11th place in the championship standings with 348 points on the strength of six top-10 finishes including five top-five showings,three podiums and a victory at the 2013 Indianapolis 500.

Next up for KVRT is the Shell and Pennzoil Grand Prix of Houston, which will feature two races, one on Saturday, October 5 the other on Sunday, October 6, on the streets of Houston, Texas. The Houston doubleheader will be the third time this season that the IZOD IndyCar Series has contested twin events (Detroit and Toronto). Both races will be broadcast live on NBC with the Saturday event airing at 3:00 p.m. ET and the Sunday event going off at 1:00 p.m. ET.

Kanaan Consecutive Streak: Tony Kanaan consecutive start streak began on June 24, 2001 at Portland after missing the previous race, the Detroit Grand Prix, due to a concussion received in an accident during qualifying. Despite injuries to his wrist at Motegi in 2003, a broken rib suffered at the 2009 Indy 500 and three damaged thumb ligaments at Long Beach this year, he has gone on to compete in the final 14 races in 2001 and in every race over the next 12 seasons.