Harding Steinbrenner Racing’s Colton Herta drove a flawless race to hold off Will Power of Team Penske and score his second victory of the season, while Josef Newgarden showed the wisdom of experience to drive an ill-handling car to a cautious eighth place and earn his second championship and Penske’s 16th. 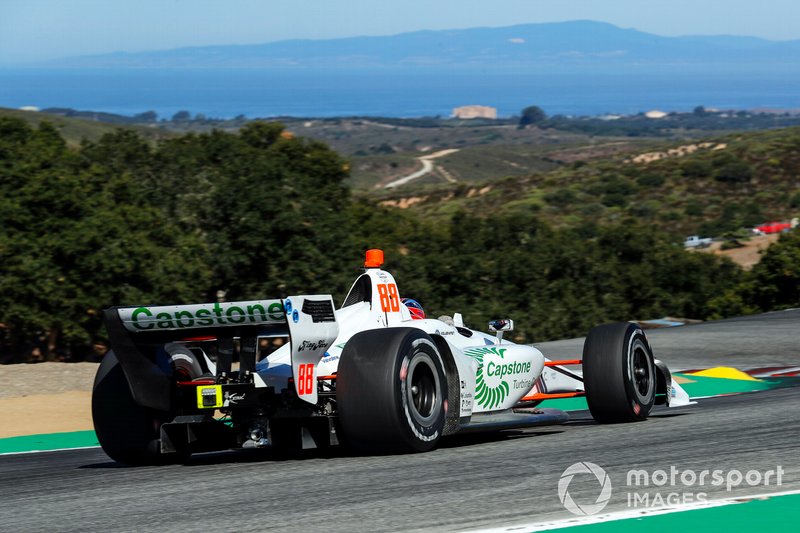 The second Penske of Simon Pagenaud, also on used reds, immediately tried to put some pressure on James Hinchcliffe’s Arrow Schmidt Peterson Motorsports-Honda for fifth, while the top primary-tired car, Will Power’s Penske, came under pressure from the fast-starting Ryan Hunter-Reay in the second Andretti machine over the opening laps. Santino Ferrucci and Felix Rosenqvist, meanwhile, moved up from 12th and 14th to run ninth and 11th.

Within five laps, Herta and Dixon’s used reds were clearly paying off, and the pair were just 0.9sec apart but over two seconds clear of Rossi. On the same lap, Rosenqvist’s Ganassi moved past Graham Rahal’s Rahal Letterman Lanigan Racing-Honda (used reds) to take 10th. The Swede, who still felt wronged by Race Control for his qualifying penalty, swiftly moved in on fellow rookie Ferrucci. Both of them would lose out on Rookie of the Year honors to Herta, were positions to remain as they ran in these early stages.

Herta’s lead over Dixon remained less than a second at Lap 10, but Rossi was six seconds adrift and with title rival Newgarden filling his mirrors.

Carlin’s Max Chilton and Charlie Kimball, as well as Takuma Sato pitted on Lap 11, despite the latter two starting on primary tires.

Pagenaud elected to get off his used reds and onto used reds, and it proved crucial. Next time by, Rossi and Newgarden pitted together – Newgarden for blacks, Rossi for fresh reds – and the #2 Penske crew jumped Newgarden ahead of the Andretti driver. Rossi then had to defend hard against Pagenaud who was having none of that as they ran from Turn 3 to Turn 4, and Rossi ran slightly off track.

Pagenaud then kept up his momentum and passed Newgarden without issue.

Equipped with blacks, Newgarden had nothing to stave off Rossi on reds, who passed him up the inside heading into Turn 6.

Dixon stopped on lap 17, Herta on Lap 18, both grabbing a set of primary tires, and despite Dixon’s best efforts on his out lap, he couldn’t dive past the cold-tired Herta on the youngster’s out lap.

Power’s primaries lasted long enough to stop six laps later than Newgarden and Rossi, and he emerged from the pits one second ahead of Newgarden and now equipped with fresh reds. Hinchcliffe meanwhile, had fallen to ninth during the pitstop sequence, behind the battling Swedes, Ericsson and Rosenqvist in seventh and eighth. The Ganassi driver passed the Arrow SPM driver on Lap 24.

Another driver to have a catastrophic pitstop was Hunter-Reay who stalled trying to exit his pit.

Lap 25 of the 90 saw Herta leading Dixon by a second, with the impressive Pagenaud just 1.2sec behind and 2.4 ahead of Rossi. Power, meanwhile, was closing in on Rossi by half a second a lap, and Rosenqvist was homing in on sixth-placed Newgarden who was suffering from slightly hot rear brakes.

Power passed Rossi for fourth into Turn 6 on Lap 30, just after Alex radioed to his team that his tires were gone. Another Penske man on the move at this point was Pagenaud who was truly haunting Dixon, the pair of them now being hunted down by Power. Rossi’s pace, meanwhile, was so poor that he had dropped into the clutches of Newgarden, who was baulked enough that Rosenqvist zapped the Penske into Turn 6. Into Turn 4 on Lap 36, the Swedish rookie blasted past Rossi on the outside. That was enough to prompt Rob Edwards to pit Rossi, Penske to pit Newgarden, and this time Rossi beat Newgarden out – just! However, they both had to cede to Ericsson’s Arrow SPM car which had stopped just one lap earlier.

Dixon and Pagenaud pitted together on Lap 38, emerging in the same order. Herta went two laps longer and that was enough of a cushion to see him emerge ahead of Dixie and Pagenaud. Power went a lap longer still, and emerged ahead of Dixon, in second but on cold tires he couldn’t quite keep him back (or not in a fair manner at least). That meant he was also obliged to let Pagenaud – still a title hopeful at this stage – back into third place.

Conor Daly brought out the first caution of the day on Lap 46 when he tried a pass on temporary teammate Marco Andretti at Turn 2 and spun. The caution period brought in Jack Harvey, Ed Jones and Daly pitted, the latter now a lap down.

The restart saw Power have to hold off a strong challenge from Rosenqvist into Turn 2, while a little further back, Ferrucci ran hard into the rear of Sato and broke his own front suspension and eliminated himself from the Rookie of the Year honors.

Herta meanwhile, remained composed ahead of Dixon, and while Pagenaud tried to pressure Dixon for second, the Ganassi driver was equal to his challenge and edged away. Ericsson, meanwhile, remained sixth, ahead of title contenders Rossi and Newgarden and the second Arrow SPM car of Hinchcliffe.

The top five were covered by just 4.5sec on Lap 60, but Herta had stretched away from Dixon by 2.3sec two laps later, and Pagenaud was once more closing in on Dixon, and Power was looking impatient behind Pagenaud.

Rosenqvist was the first of the top five to pit for the final time, on Lap 63. The next time by, Herta and Dixon pulled in, leaving Pagenaud and Power up front, just 0.7sec apart. Pagenaud stopped next time by and emerged in front of Dixon, but Dixon passed him around the outside of Turn 5. Power went two laps longer still and emerged just behind Herta and well clear of Dixon, albeit on colder tires.

Hero move of the day came on Lap 70, when Rosenqvist, who’d seen Pagenaud drift slightly off track at Turn 4, charged hard at him up the hill and dived inside him at the top of the Corkscrew and made it stick, albeit with Simon’s cooperation by going off track on the right.

Pagenaud was in feisty mood, however, and would not be shaken off. Into Turn 2 on Lap 76, he dived down the inside of the Ganassi car to wrest fourth place away.

With 10 laps to go, Herta was leading Power by just 0.75sec but Colton had 40sec of push-to-pass left compared with Will’s 4. Not far behind, Dixon and Pagenaud were in similar state, and on Lap 83 Dixon ran slightly long and wide into Turn 2, allowing Simon to get alongside but the five-time champion clung on around the outside. Less than 3sec back, Rosenqvist was now under pressure from the charging Rossi, while Bourdais passed Newgarden for seventh on Lap 85.

A lap later, Pagenaud tried again on Dixon at Turn 2 but again was foiled. Power, meanwhile, was right on Herta’s tail until running wide at Turn 11 on Lap 87. He closed in again but fell 0.58sec short at the checkered flag. Six seconds back, Dixon held off Pagenaud by just 0.11sec, while Rosenqvist kept back Rossi and clinched the Rookie of the Year title by five points.

Newgarden, meanwhile, took it carefully and came home eighth with his ill-handling car, sobbing as he hugged his team afterward.

Herta: It would be hard to give up lead to Rossi

Indy 500: Why does the winner drink milk? A tradition explained

Indy 500: Why does the winner drink milk? A tradition explained