The Leaders Circle designation has been expanded to 22 teams which covers all the committed full-time entrants. 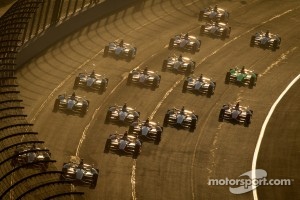 The confirmed 19 returning members that finished in the top 22 in 2012 entrant points each have been awarded Leaders Circle designations. INDYCAR used its option to fill the three open positions based on the remaining order of 2012 entrant point standings. One entry from Sarah Fisher Hartman Racing, HVM Racing and Dragon Racing each were awarded Leaders Circle positions. In 2012, the program featured 20 entrants.

"While the Leaders Circle program was designed to ensure the quality of on-track competition was balanced throughout the field, we felt it was important to extend Leaders Circle benefits to all returning full-time entrants from last season," said Jeff Belskus, CEO, INDYCAR. "Including all 22 entrants for 2013 allows the IZOD IndyCar Series to continue to build upon the foundation the program has laid over the last several years."

The Leaders Circle program was established in 2002 to provide incentives to teams that participate full time in the IZOD IndyCar Series. Each Leaders Circle member is assured a minimum of $1 million for the 19-race season if the entrant successfully qualifies for the Indianapolis 500.

"While we are seeing a slight decrease in Leaders Circle payout this season, our goal is to reinvest in the series with more promotion to increase the value of participation for all of those involved," Belskus said.

Contingency prizes will continue to be awarded at IZOD IndyCar Series events.