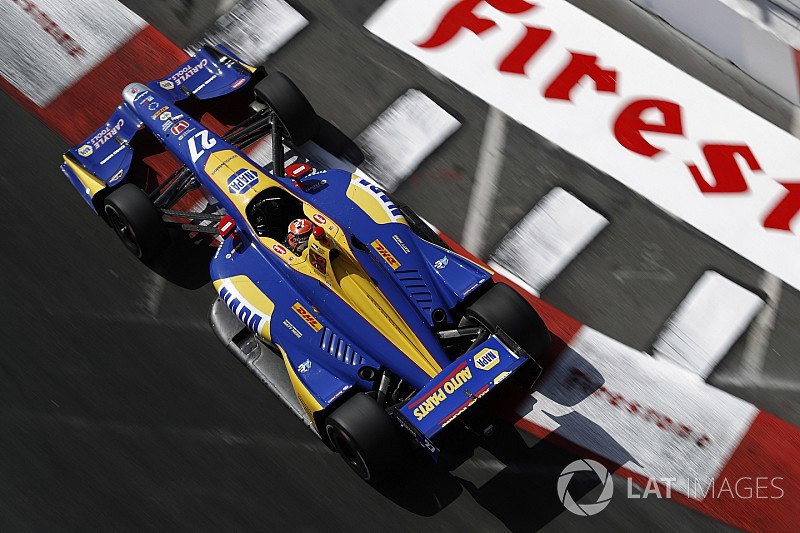 Alexander Rossi added a street course win to his burgeoning IndyCar résumé at Long Beach, the Andretti Autosport-Honda driver holding off Team Penske-Chevrolet’s Will Power in a late-race shootout.

Rossi led away from pole, while Power made a poor start, then recovered to claim second. But on the outside line, Graham Rahal nudged into Simon Pagenaud and spun the #22 Penske into the wall.

Rahal held the moment to claim third, but went under stewards’ investigation and was issued a drive-through penalty. Meanwhile Hunter-Reay clipped Scott Dixon’s left-rear, and under the caution, he had to pit for a new front wing.

On Lap 7, Kanaan got around Wickens, while up front, Rossi had already pulled a 3.5sec lead on Power who had Dixon, Newgarden, Hinchcliffe and Bourdais stacked up behind him.

These stops had allowed the primary-tired Hunter-Reay to make stunning progress up the order, and was into ninth by Lap 15 – albeit 22sec behind his race-leading teammate Rossi – and then into eighth on Lap 17 when Tony Kanaan pulled the other Foyt car into pitlane.

Hunter-Reay’s next victim was rookie teammate Zach Veach, to claim seventh, and he rapidly closed on King.

Up front, traffic had allowed Power to stay around 3.5sec behind Rossi, 1.5 ahead of Dixon, with Bourdais a similar distance behind the Ganassi driver. Wickens, in fifth, was over seven seconds further back by the time he pitted on Lap 24. But it wasn’t just a tire change; the car sounded like it was struggling for gears, it only rejoined after a long stop, and it was back in the pits a lap later.

Rossi pitted from a 3.5sec lead on Lap 25 – the same lap as Marco Andretti and Max Chilton – and it was a swift stop. That left Power, Dixon, Bourdais and King to try and nail some fast laps before their first of theoretical two stops.

King stopped on lap 28, but Power, despite approaching traffic and seeing 2.5sec lead over Dixon drop to 1.5, left it a lap longer. Dixon and Bourdais followed him. Dixon got out ahead of Power, and on his out lap, Power was further demoted by the three-stopping Newgarden on warm tires. Hunter-Reay led for just a lap before pitting.

Rossi was now out in front with an 8sec lead over Dixon, followed by Newgarden, Power, Bourdais, Kanaan, Jones, Hunter-Reay, King and Hinchcliffe. Meanwhile Rahal made his third pit visit – his second for fuel and tires.

Bourdais on red alternate tires dived up the inside of the now primary-tired Power to claim fourth on lap 36 and repeated the move on Newgarden two laps later. Further back, Sato snatched eighth from King, while Newgarden made his second of three stops on Lap 39.

At half-distance, Dixon had carved Rossi’s lead down to 4sec and change, but then out came the yellow flag – Kaiser had skated down the escape road in Turn 1 and needed a bump start. Kanaan had just committed to the pitlane in time, pitting from fifth and rejoining in 10th.

Three lapped cars between himself and Dixon ensured Rossi had an easy restart on Lap 47, but further back there had been drama as Hunter-Reay got loose and was struck by Sato, leaving the Andretti Autosport machine with a flat tire. The pitstop dropped Hunter-Reay to 19th.

The move of the race came a lap later, as Dixon struggled past one of those backmarkers, Bourdais passed both of them and took the lapped Leist, all on the run into Turn 1. However, Bourdais was ordered by Race Control to give up second to Dixon for using the pitlane exit for his mega-pass.

He did so, and then repassed his fellow four-time champion, but it left the Coyne car seven seconds behind leader Rossi, so team manager Rob Edwards decided to take advantage of the situation and call Rossi in on Lap 56, when he also took a half turn of front wing.

Having taken a while to pass the knot of backmarkers that had troubled Dixon, Power started laying down some fast laps before stopping on Lap 59. Following him in was King, keeping up his very strong performance.

Then the yellows flew again – Zachary Claman De Melo had struck the wall so both Bourdais and Dixon hit pitroad – but according to IndyCar, after the pits had closed. The #9 Ganassi team elected to service Dixon, Coyne’s team sent Bourdais on through, to return to pits once they opened.

When they did open, Newgarden led the charge of the remaining three-stoppers, with Kanaan, the ‘re-stopping’ Bourdais, Hinchcliffe and Jack Harvey in the Michael Shank Racing-SPM car in pursuit. Under yellow, King’s strong run ended, in desperate need of having his brakes bled.

Rossi led Dixon, Power, Jones, Veach, Andretti, Rahal, Kimball, Newgarden and Kanaan to the green flag on Lap 66 of 85, but Dixon would receive a drive-through penalty, which he served on Lap 68. Newgarden muscled past Kimball to claim eighth. Two laps later, Rahal would pass Andretti for fifth.

With 17 laps to go and Dixon out of his way, Power had a 2.4sec gap to try and close on Rossi. Despite using push to pass, Power could only hold the gap to Rossi steady.

It became temporarily immaterial, when the recovering King dived inside Hinchcliffe at the final hairpin on Lap 71, tagged Bourdais and spun him broadside. That blocked the track for those immediately behind including Wickens and Hunter-Reay. Bourdais, too, needed a new front wing.

Since the race was within 15 laps of ending, the lapped cars were moved to the back of the field, theoretically giving Jones a chance to have a go at Power. However, when the green flag flew with nine laps to go, the #10 Ganassi driver was having to defend hard from Veach.

Further back Newgarden repassed Kanaan after losing out on the restart, while Hinchcliffe passed Kimball after two failed attempts to claim ninth.

Power gave it everything he had over the final laps, leaning on his push to pass, but Rossi did likewise and was always able to keep the Penske driver at arm’s length, eventually crossing the line to win by 1.24sec. The pair of them had pulled over eight seconds clear of Jones, who nonetheless clung on to match his best ever finish with third place, his first podium for Ganassi.

Veach was top rookie with fourth place ahead of Rahal, Andretti, Newgarden, Kanaan, Hinchcliffe and Kimball. Dixon was 11th and Bourdais finished down in 14th.

The result moves Rossi to the top of the standings, 23 points clear of Newgarden.