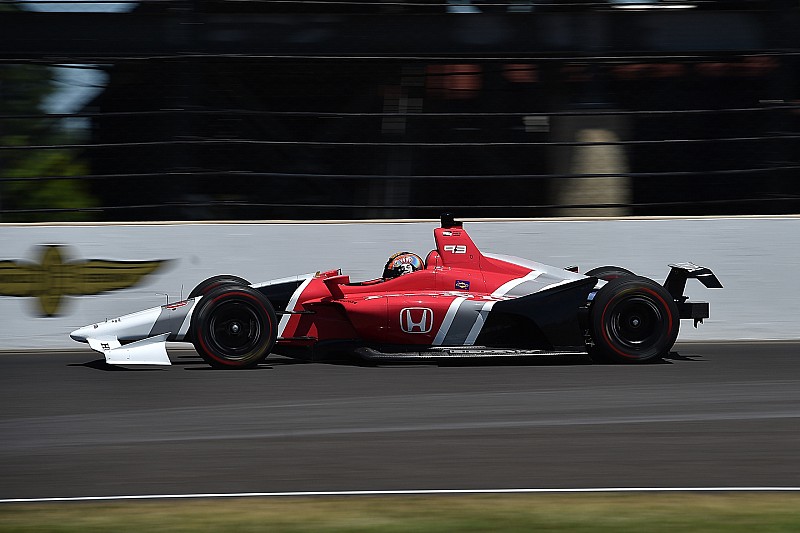 Juan Pablo Montoya and Oriol Servia have given an initial thumbs-up to IndyCar's 2018 universal aerokit after testing the package on Tuesday at Indianapolis Motor Speedway.

The pair of IndyCar veterans each completed over 100 mostly trouble-free laps at a pace very comparable to the race pace for the 2016 Indianapolis 500.

“It’s exciting! For it being the first time in the car, it drives really, really well," exclaimed double Indianapolis 500 winner Montoya, who was working with Team Penske.

“The car looks good, and drives really well. I think they addressed a lot of things (that needed addressing). By not having all the weight at the back end of the car with the rear wheel guards it’s going to make it drive better.

“We haven’t run in traffic, but I think the car will be better, so the racing should be a little better as well.”

Servia, who has made nine Indianapolis 500 starts, including the last seven in a row, was even more effusive in his praise of the sleeker 2018 body kits.

“The first test with the new car was at Indy,” explained the Catalonian veteran. “All the races are important, but we all know that the Indianapolis 500 is, at the end of the day, the race we all care the most about.

“From Lap 1 it just felt like home. The car felt great. I was flat out of the pits, which doesn’t say much about my smarts, but it does explain how good the car felt right away.”

The test, which was originally scheduled to take place over two days, was shortened to one day when all of the test boxes were checked off by 5pm on Tuesday evening.

With load-in for the Honda Indy 200 at the Mid-Ohio Sports Car Course scheduled for Thursday morning, both teams were happy to get the extra day of preparation.

“There was a window, and the window was hit all day long. I think today played out exactly like we were hoping it would,” explained a satisfied Jay Frye, president of IndyCar operations.

The new body kit is a joint effort between IndyCar, Dallara, and design experts in the United Kingdom. Its development involved on-track testing at the end of 2016 with Chip Ganassi Racing, Andretti Autosport, and Ed Carpenter Racing, computational fluid dynamics (CFD) analysis by super computers, and also plenty of time in the wind tunnel.

A similar process was used to design the original IR-12, and during the original three days of testing with Dan Wheldon behind the wheel in September 2011, that ill-handling Honda-powered Dallara struggled to even hit 210mph.

The car, eventually named the DW12 after the two-time Indianapolis 500 winner, required a redesigned floor to even be drivable at the Indianapolis Motor Speedway.

What a difference six years makes, as only four laps after getting on track, Servia turned an unofficial lap speed of 217mph.

After the day of testing was complete, Bill Pappas, IndyCar's vice president of competition/race engineering, understandably had a big smile on his face.

Pappas said: “You hold your breath until the first competitive laps are done and can listen to the driver’s feedback. I think we have to be pleased. It matched up with our numbers that we predicted in the wind tunnel and CFD.”

The day got off to a slow start as a horde of media and cadre of interested crew members from other teams swarmed the cars to give them the once over.

Montoya turned the first laps of the day just before 9:15 am, and 45 minutes later, the longest yellow flag of the day occurred when Servia’s distinctive red, black, grey and white liveried car ground to a halt in front of the packed spectator mounds in Turn 2.

The Indianapolis Motor Speedway safety crew was dispatched to the scene to tow Servia’s No. 93 back to the attention of the Schmidt Peterson Motorsports crew, and the problem was diagnosed as “software” related.

The majority of the morning consisted of shorter runs, as the teams, drivers, manufacturers and sanctioning body sought to find a balance that everybody was comfortable with.

As the handling on the cars improved, Servia and Montoya both ended the day with a pair of 20+ lap runs, logging laps, unofficially, in the 218mph range.

New IndyCar design for 2018 hits the track at Indianapolis