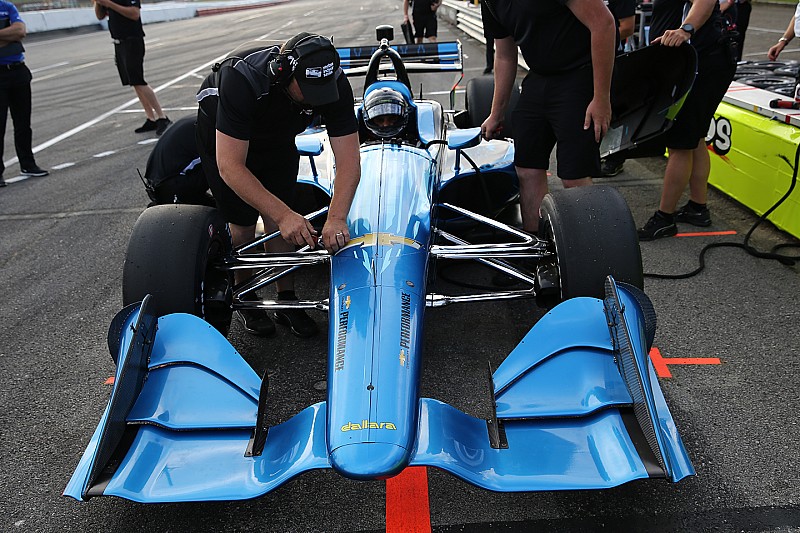 The new-for-2018 IndyCar aerokit has left testers Juan Pablo Montoya and Oriol Servia happy in its third of four sign-off tests, this one held at Iowa Speedway.

Following similarly positive tests at Indianapolis Motor Speedway on July 25 and Mid-Ohio on Aug. 1, this was the test where Montoya (in the Penske-run Chevrolet car) and Servia (in the Schmidt Peterson Motorsports-run Honda car) got a chance to test two potential short-oval configurations.

This was regarded as the most crucial test by many, following some poor racing at short ovals. The drivers ran in low- and high-downforce setups, the latter producing similar levels of downforce to this year’s manufacturer aerokit-equipped cars, the former with a 20 percent reduction. Both drivers preferred the low-downforce trim.

"It's interesting how you can run the same lap time and in one [downforce level] you're completely flat out and the other one you are lifting [off the throttle] in the turns.”

Servia also stated that IndyCar’s intention to create more of the downforce from the underside of the car was paying off.

"I was able to run a decent distance behind Juan Pablo, and the car just loses a little bit of grip but a four-tire kind of slide," he said. "It's not like the front loses a lot of grip or the rear loses a lot, which is the problem with the current car."

Bill Pappas, series’ vp of competition/race engineering stated: “Again, the idea was to check off boxes and we did all the boxes we wanted to.

“We wanted to analyze the downforce level we've been running here the last couple years versus what we thought was a target lower downforce, and both drivers responded favorably to the lower downforce. They thought they were able to drive the car a bit more, rather than hanging on, so that was very encouraging.

“As far as running in traffic, the car never felt like it was going to get away from them - spin out or have any issues with stability. They were both very happy about that."

Urrutia claims to be close to IndyCar deal for 2018