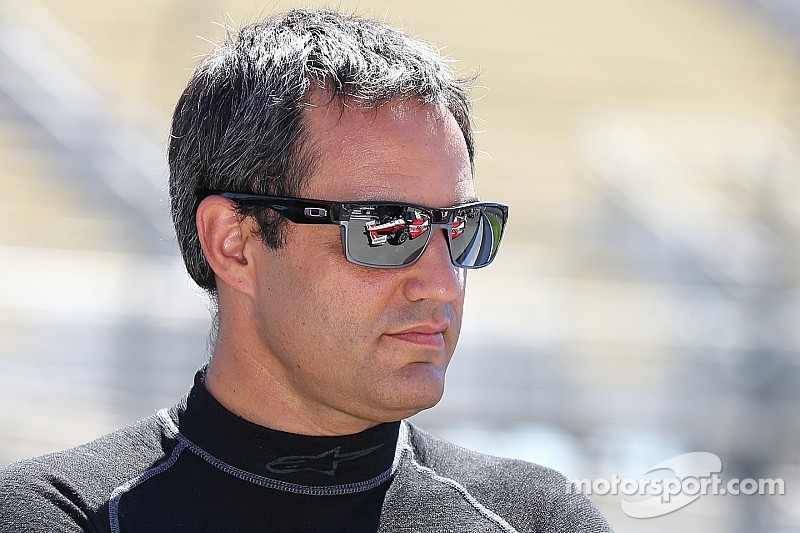 Montoya returned to Indy car racing in 2014 with Team Penske after a 14-year absence.

Juan Pablo Montoya works without a script, which allows the Verizon IndyCar Series driver spontaneity of thought with youngsters during classroom interaction. There is an underlying message though, no matter the age group.

The brief remarks, delivered with sincerity and passion, grab the attention of the students and spawn numerous questions about Indy car racing, technology and his upbringing in Colombia.

People have said, 'Oh, because you're Latino you've had opportunities,' but I never felt that.

"I just speak from the heart," said Montoya, who made a $10,000 donation on behalf of the Verizon Foundation, to the school's Science, Technology, Engineering and Math program.

Montoya's chat also is drawn from experience. Montoya, who returned to Indy car racing in 2014 with Team Penske after a 14-year absence, has been at the pinnacle of the sport by winning the 1999 CART championship followed the next May with an Indianapolis 500 Mile Race victory. He's also faced obstacles and heartache in his motorsports career that includes winning races in Formula 1 and NASCAR.

"I tell them a little bit of history of my life, about the obstacles that everyone will face through life and the opportunities you'll have," he says. "You have to take advantage of those opportunities and show anybody that it doesn't matter where you're from if you're willing to go as far as it takes to get the job done."

Montoya, 39, who grew up in Bogota, Colombia, equates his outlook on life to his proud heritage. Through Oct. 15, Americans are observing National Hispanic Heritage Month by celebrating the histories, cultures and contributions of residents whose ancestors came from Spain, Mexico, the Caribbean and Central and South America.

"Latinos, overall, are people who are willing to go further than anybody and we'll find ways to make things work more than anybody else," says Montoya, who lives in Miami. "We're a very determined people who will find solutions and ways to fix things. I'm a very proud Latino. People have said, 'Oh, because you're Latino you've had opportunities,' but I never felt that. People always have respected me for who I am. It's more of what you can do."

Last year, Montoya was honored by the Hispanic Heritage Foundation at a ceremony in Washington, D.C., for his impact on America and the world through sport. The schoolroom chats this past Verizon IndyCar Series season are an extension of his social consciousness.

"It's cool that Verizon gives me the opportunity to connect with people because in a way it's what our foundation in Colombia does," he says about the Formula Smiles Foundation. "We educate through sport how to be team members, more than focus on themselves."

The Formula Smiles Foundation, started in 2003 by Montoya and his wife, Connie, focuses on the education through sports for youngsters 6-17 living in vulnerable areas of Colombia as a comprehensive activity to reduce social and gender inequality.

According the foundation's mission statement, sports grant children the opportunity to learn and subsequently strengthen core life values such as teamwork, respect, responsibility and self-discipline. Formula Smiles complements academics with after-school physical education that motivates them to use their free time to practice sports and sportsmanship skills.

An annual motorsports all-star karting race in Colombia, organized by the Montoyas, is a major fund-raiser for the foundation.

"I'm living to make an impact on society," Montoya says. "I don't do it to say I have a foundation. It's more about the poor population in Colombia is really high and we felt we had to take care of kids who have nothing. There are organizations that care about what they eat and where they sleep. But we felt nobody cared about what they did in their free time, and that's why we created our foundation."