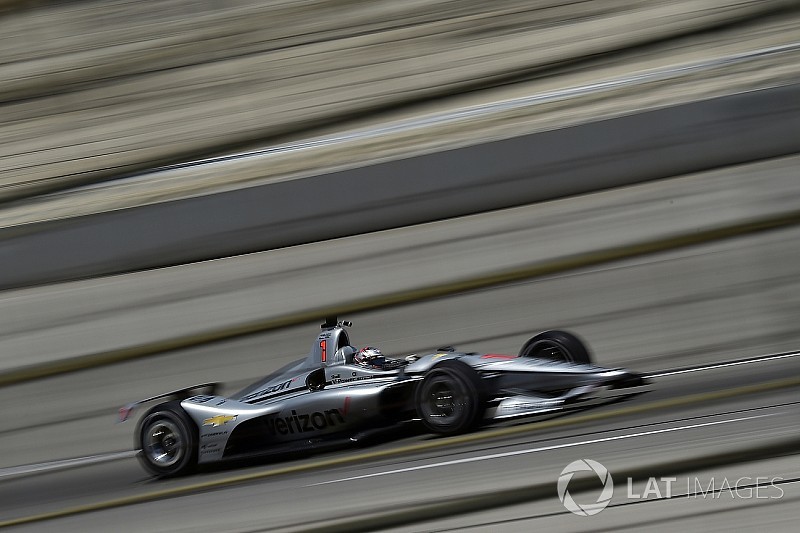 Newgarden led a Penske 1-2-3 in qualifying and said he found it “comforting” to know there’s a lot more chance of catching the cars, which have shed between 400 and 600lbs of downforce in 2018 at this track.

“I do think you can really feel the car a lot more,” he replied to Motorsport.com’s enquiry. “You get a lot more warning. We overstepped the balance there in practice this morning, the car was violently loose. I thought it was wrecking a couple different times. But I could feel where it was at, I could nurse it back to the pits at least.

“It's comforting knowing you have more warning for where the car is at, what it's going to do. Even in qualifying there, [the car] was pretty neutral. The car was just about right, but it was on the edge for where the downforce was at, I thought.

“I could feel where the car was sliding at. It's not these quick, violent snaps, but a little bit more of a progressive slide. With this car you've been getting that everywhere. [So] if tire dropoff becomes a thing at 35, 40 laps, then guys are going to have a lot easier time hustling the car if it's heavy on the right rear and tires are wearing out. I think we will have an easier time.”

Regarding certain other drivers not having that feel, Newgarden shrugged it off saying: “It just feels like light downforce to me. When the car is not glued to the track, you're going to feel more the mechanical side. I think guys are just feeling the loss of downforce. There's quite a bit less than last year.

“The other thing that is probably a contributing factor is we haven't had a ton of time on it. I think these guys need a little bit more time working on their racecars. I had the advantage of being here [with this car]; I came during the tire test. I sort of already knew what to expect coming into it.”

The reigning champion who has won this year at Phoenix and Barber, said he expected cars to be able to run together and pass until tire degradation kicks in.

“Ideally I think if you have a good race, the start of the tire life, you have 10, 15, 20 laps where guys are really fighting, then it starts to string out. That's been a good mix for us personally. That's what I like around Texas, where you can fight people in a pack, but then you really have to start working on the tires after that, try to make the car last. That's what I predict is going to happen. Maybe that will change a little bit after we have wear on the tire.

“Every track we've been to has been so different with this car. We haven't run on a track like Texas. It's hard to compare it to Indianapolis because they're two different beasts. Because we haven't run here with this car, this tire, it's a little hard to predict at this point.”

The teams and drivers get one more hour of practice tonight at 6.15pm local (Central) time.