Josef Newgarden says he grew accustomed to IndyCar’s aeroscreen after just 30-40 laps of Richmond Raceway, as he and Scott Dixon began testing at the 0.75-mile oval which returns to the NTT IndyCar Series in 2020.

Team Penske-Chevrolet’s 2017 and ’19 champion was taking part in the third on-track test of the Red Bull Advanced Technologies-developed aeroscreen which becomes the series standard next year. Dixon and Will Power started the process at Indianapolis Motor Speedway two weeks ago, with Simon Pagenaud and Ryan Hunter-Reay performing the road course test at Barber Motorsports Park last week.

Newgarden said: “I'm excited to be here. Pretty easy morning for the most part just getting going. We're kind of just running through a big program for Firestone to make sure that we get everything checked off the list for them.

“It was my first time with the [aeroscreen]. Just getting a feel for that. It honestly was pretty seamless. Honestly didn't feel that different. Perception-wise it was a little different when I got in. It took maybe 30, 40 laps; after that you're used to it. It feels kind of normal at this point.

“This is Scott's second time with the screen, my first time… When I first went out, my perception of how much grip the car had and how much control I had in the car was slightly different. But I think that was because it felt foreign. You're not used to having a screen over your head.

“But after 20, 30 laps when you got used to it, the car feels very similar… Compared to a place like Iowa or Gateway, it feels very similar. From a tuning standpoint, it did not take much to get the car back into the correct window as far as the balance. I think the balance is still very good, even with the screen on. From that standpoint, I don't think the cars are going to change dramatically going into next year.”

Dixon, who won the first and last of his seven IndyCar races at Richmond, compared his latest laps with the experience he gained in the Indy Racing League Dallara from 2003 through ’09.

“I think we've kind of been honing in on a lot of tires,” said Chip Ganassi Racing’s five-time IndyCar champion. “We’ve been going through 10 or 15 sets of different construction and compounds.

“The car does feel a lot different from when even we first ran here in the early 2000s to the last time we ran here. A lot less downforce, probably a little more power or similar power. It's quite tricky, a lot of fun to drive. Feels fairly low grip at the moment in some situations.

“It's hard to say, too, from a racing perspective as it's only Josef and me here, and we're mostly doing single runs at the moment.”

Dixon said that although his aeroscreen at Richmond was “pretty much the same configuration from Indianapolis”, he added that the airflow into the cockpit had been altered.

“The nose box I think has a few more openings on it, which is helping the flow there. There was a device that we tried earlier in the day, but it wasn't secured well enough, that we'll revisit later this afternoon.

“I think for the oval stuff, the car's fine. I know there were some different additions they ran at Barber with the other two drivers there. Those I think we'll try maybe later this afternoon as well with some helmet cooling options to prep everybody for the upcoming season.”

Regarding alterations to the car’s performance, he said: “I think you may see some differences in outright lap time. We did add almost 60 pounds to the car. It may affect the aero a little bit. You'll get some more [tire] deg with the higher CoG, as well. There are some things that may slow down the performance a little bit.

“But honestly, I think it's going to be almost a net zero on that kind of situation with the development in the off-season, people kind of working around it. I think it will be interesting.

“We felt some slightly different situations in running with Will at the Speedway in traffic. We'll have to see how that plays out. Again, I think it's more of a tuning thing you'll have to kind of build in for when we are racing in packs.”

The next aeroscreen test will be at Sebring Raceway short course and conducted by James Hinchcliffe of Arrow McLaren Racing SP (formerly Arrow Schmidt Peterson Motorsports), which will be running the Chevrolet engine for the first time, and Sebastien Bourdais of Dale Coyne Racing-Honda. 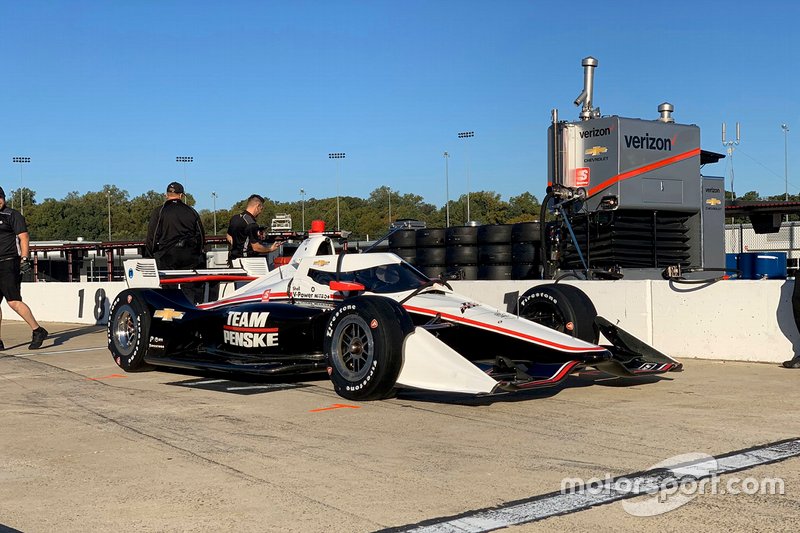 IMSA
Roar Before The 24