Josef Newgarden says that his IndyCar victory in the DXC Technology 600 at Texas Motor Speedway was down to Team Penske’s tactics and a strong car in clean air – but he also reckoned his in-lap on the decisive pitstop was also crucial. 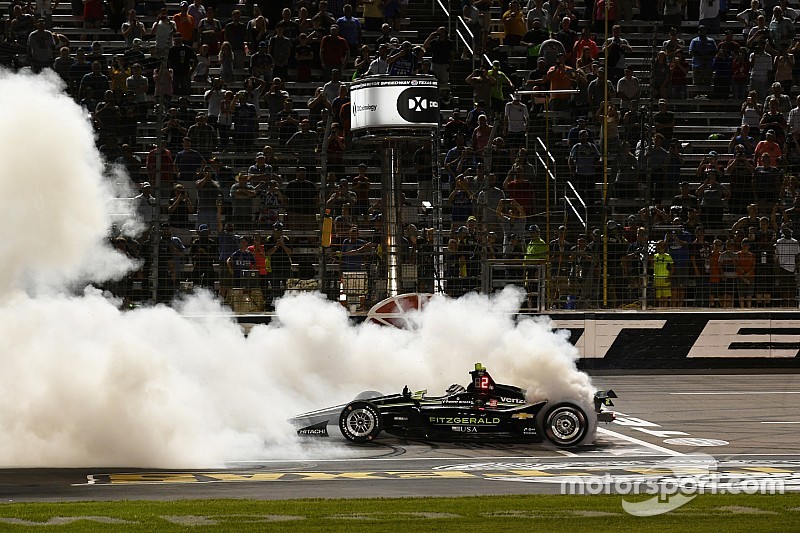 During the first caution of the night, with Newgarden running ninth, his strategist and team president Tim Cindric pulled him into the pits, off-strategy from the leaders.

When they pitted for the final time between Laps 179 and 190, Newgarden had a clear track and started setting personal bests, nailing the fastest lap by a leader on 197 just before he pitted for the fourth and final time on 198. When he re-emerged from the pits he was leading Ryan Hunter-Reay, Scott Dixon and Alexander Rossi.

He then survived two restarts – one with Dixon trying to pass him on the outside of Turn 1 and then another that saw Rossi try to pass him around the outside at Turn 1 for six consecutive laps – to score his third win of the season and 13th of his career.

“This win was down to the team right here,” said the 2017 series champion who extended his points lead over Rossi to 25. “They keep putting me out front, putting the pressure on me. I guess it's a good thing. It's good when they put you out front, put it on you. They did a great job tonight.

“I knew if we could get to the lead, I could crank out super-quick laps and jump everybody. That's what we did. It was a great plan. We had to make hay after that pit stop. We had to get back up behind the lead pack.

"Once we did that, I thought, ‘Man, we're just in position.’ The guys did a great job.”

Speaking of the final shootout with Rossi, Newgarden said: “He was really good in traffic. We were kind of vice versa. We were really good out front. If we can just get the car out front, we can run just as quick as anybody, maybe quicker. Once we got out front, we were pumping out super-quick laps.

"I looked early in the race – [Rossi] was very good in traffic. His car looked stellar behind others and I knew he was going to be difficult to beat. He had a great car. He drove me clean. He drove me hard.

“I think we just had enough. I think we had enough power there from Chevy. Our car was handling well enough out front we could get the job done, pretty much stay on the throttle as much as we needed to just to stay ahead of him."

Dixon’s challenge on the penultimate restart looked even stronger than Rossi’s efforts, but Newgarden held the inside line so determinedly into Turn 1 that eventually Dixon had to concede as he ran out of grip on the high line.

“I was not going to give up the bottom lane,” said the points leader. “It's tough because on the restart you're almost a sitting duck. You're going so slow there, and the draft works so well at night, especially when it cools off, you're so draggy. Being in first is such a disadvantage.

Thus the run in clean air before his final pitstop was crucial.

“I'm telling you, if you look at those five or so laps I pumped out, I guarantee you that's the quickest in lap!” he enthused. “If not… well I can't go quicker on an in lap. I knew, ‘Man, we're going to have a good set of laps here to pump out and just jump everybody.’ That's what we did.

“We were running fast, good in lap, good execution from the boys in the pit, put us out front. I knew once we were out front, we could hold them off. It was well executed, well planned.

Rossi: “It sucks… we’re always playing bridesmaid as of late”