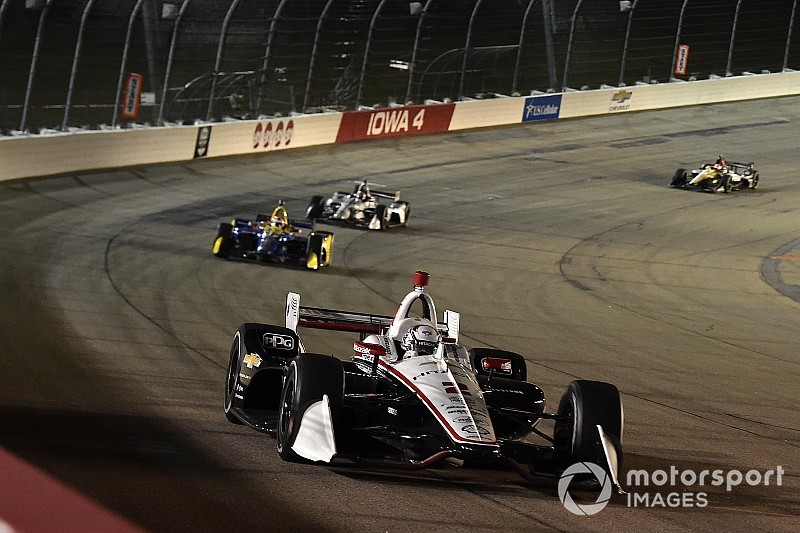 Team Penske-Chevrolet’s championship leader Josef Newgarden felt his dominant run to victory in the Iowa 300 made up for the fact that he squandered a pole-winning car in qualifying and that he led the most laps in last year’s race but didn’t finish on the podium.

Newgarden not only led 245 of the 300 laps of last night’s race, he also stretched his points lead over Andretti Autosport-Honda’s Alexander Rossi from four points to 29, as his prime title rival came home sixth.

Newgarden dominated the event for Ed Carpenter Racing in 2016, leading 282 laps, and looked set to do the same last year with Penske but after running P1 for 229 laps, his setup went off and James Hinchcliffe came through to win, much to the American’s chagrin.

Newgarden admitted he felt similarly frustrated after being outqualified by teammates Simon Pagenaud and Will Power on Friday, but once he passed Power for the lead on Lap 49, he had the “perfect car” for the cool conditions in a race that didn’t end until 1.30am.

“I was really a little bit frustrated yesterday just because I knew we had a pole-winning car and we didn't put it together,” he said afterward. “I'm very competitive, and I don't always show it, but you want to do well every session, every practice, every qualifying. You want to be the best. If you don't want that, then why are you here?

“I feel much better tonight. I really wanted us to win the race. I thought we had a good car to do that – a car capable, a team capable. I'm really pleased we were able to execute as well as we did tonight. We just did a good, solid job, car was perfect, pit stops perfect, great strategy from Tim [Cindric, Penske president and Newgarden’s strategist] and the boys.

“Kind of redeemed ourselves from last year, too. Last year I felt we had the car. It honestly fell apart with 100 laps to go. Why did it fall apart last year and how do we make it right again? I think we achieved that tonight.”

Newgarden said that the final practice session on Friday, held at the same time as the race was supposed to start on Saturday, had not been helpful.

“We tested a lot of things and we didn't make a lot of changes,” he commented. “I should say a lot of the changes we tested, none of them stuck. We ended up back where we started the evening session. We tried some things, but it ended up that what we started the session with was the best car. So we went back to that, stuck with it for the race and it panned out OK.”

The fact that storms delayed the race start (originally set for 6.15pm CT) by more than 4h30min – not counting a 27min red flag around the 50-lap mark for further rain sprinkles – significantly altered the behavior of the cars, said Newgarden.

“It was fun that we raced under the lights,” he said. “If the weather didn't happen, it wasn't really going to be a night race. It was actually kind of nice that the weather delayed it from that standpoint. Every other standpoint, it wasn't a good thing. No one likes waiting around. We certainly don't like making the fans wait. The ones that went home, completely understandable – got pretty late there. The ones that stuck with us, it was real nice they got to see a full show.

“I think the grip was just higher overall, a little more downforce, a little more power from the engine. That's the biggest thing you notice with the track temp coming down and the ambient. I felt the balance got a little tougher as the night went on. It became more difficult to follow other cars as it cooled off.

"You could kind of carve people up really well for the first half of the race. Seemed like the last 100 laps it got more difficult. I think the grip was coming up, but the balance went more loose. The cars were a handful to drive. I think people were getting loose off the corner.

Despite the cars behaving differently in the cooler conditions, Newgarden said that hadn’t demanded many setup changes.

“I think a lot of people made similar changes because of the weather,” he said. “You generally raise the car up because you're going to produce more downforce so the car is going to sink a little bit more. Just little tweaks like that – some gear changes. [But] it didn't need much. Again, we were on top of it.”