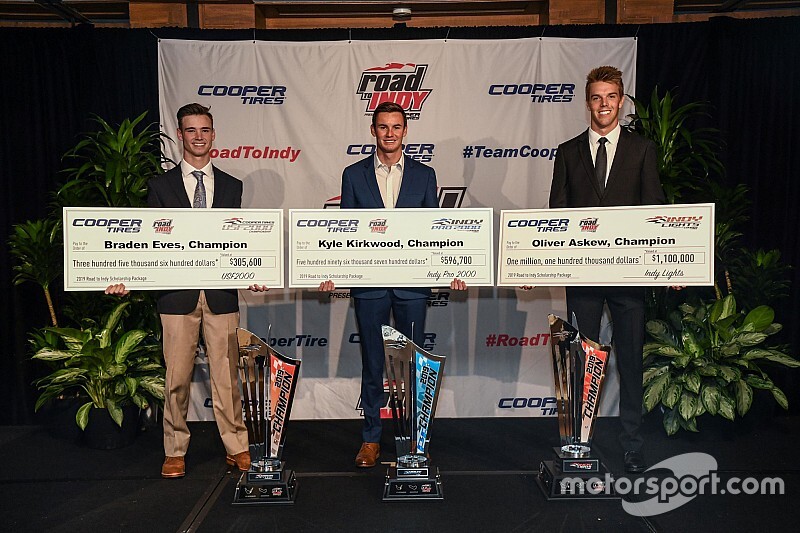 The Team USA Scholarship was founded in 1990 by journalist, broadcaster and writer Jeremy Shaw to promote promising American rising stars, and 1996 CART Indy car champion Jimmy Vasser was the first recipient of the accolade.

He commented: “It's pretty phenomenal what's going on right now. We're in an era where we're seeing a lot of young American talent starting to emerge again through our grass-roots systems, which is the Road to Indy.

“And it's really cool to see that all these guys that won the championship have been from the Team USA Scholarship, which has also been a fantastic program that Jeremy Shaw has put on from many years ago, and has continued to support year after year up to this point.

“I think there's a source of pride there for a lot of people that have been a part of that program but that also come from the grassroots of American racing. So that's fantastic. That's what we want to see within our ladder system.

“But I also think you're seeing great opportunity for young drivers from all over the world. They're able to come to these championships that are run in the United States and feel like there's a light at the end of the tunnel. They feel the possibility of working hard and getting the right opportunity and making the most of that opportunity can potentially reward you with a top-level ride and an opportunity to compete at the highest level with the best people in the sport.

“And that's really all you can ask for is that opportunity. That's the great part about American racing is they get that. Yeah, it's cool to be a part of that and cool to see it continuing to work right now.”

Shaw himself commented: “It has been an incredible season for our graduates. I could not be more proud of their accomplishments. It seems astonishing that in addition to Josef, Oliver, Kyle and Braden sweeping the open-wheel titles, fellow Team USA alum Dakota Dickerson (2015) has added the F3 crown to the F4 United States Championship Powered by Honda he won last year and Jonathan Kotyk (2017) recently clinched the F1600 Championship Series, too.

“Of course, none of this would have been possible without our loyal band of supporters, many of whom have been part of this program for many years, so a huge thank-you to them. Long may it continue.”

By winning the Indy Lights title, Askew has earned a $1.1million prize that will see him compete in at least three IndyCar races next year, including the Indianapolis 500. Kirkwood’s IP2000 championship will allow him to graduate to Lights with a $596,700 check in his hand while USF2000 champ Eves earned $305,600 for his move up to IP2000.