How Newgarden can win the IndyCar title, how he can be stopped

With the race at WeatherTech Raceway Laguna Seca handing out double points for race finishing positions – but not bonus points – a win is worth 100 points, second is 80, third is 70, fourth is 64, fifth is 60 etc. Bonus points remain one for pole, one for leading a lap and two for leading the most laps.

Should Newgarden, a four-time winner this year, finish fourth or better, he clinches the title even if Rossi wins and scores all bonus points. A fifth-place finish will be enough for him should neither Rossi nor Pagenaud clinch any bonus points.However, should Rossi take the win and score two bonus points, or should Pagenaud win and take three bonus points, then Newgarden will be beaten to the crown.

Dixon's sixth title depends on an outlandish confluence of events – he needs victory, Newgarden finishing 23rdin a 24-car field, and Rossi and Pagenaud finishing sixth or worse. In those circumstances, Dixon can't afford to lose any bonus points to any of this trio.

In the event of a points tiebreaker with Rossi, Dixon would win the title – as he did in 2015 over Juan Pablo Montoya – by having more wins. Should Dixon win the race and tie on points with Pagenaud, they would each have the same win tally, but the Ganassi driver would prevail due to having more runner-up finishes) with the win. Should Dixon end up on a points tiebreaker with Newgarden, it’s the Penske driver who would be classified ahead in the championship thanks to having more wins.

Below are all the points permutations. Click to enlarge. 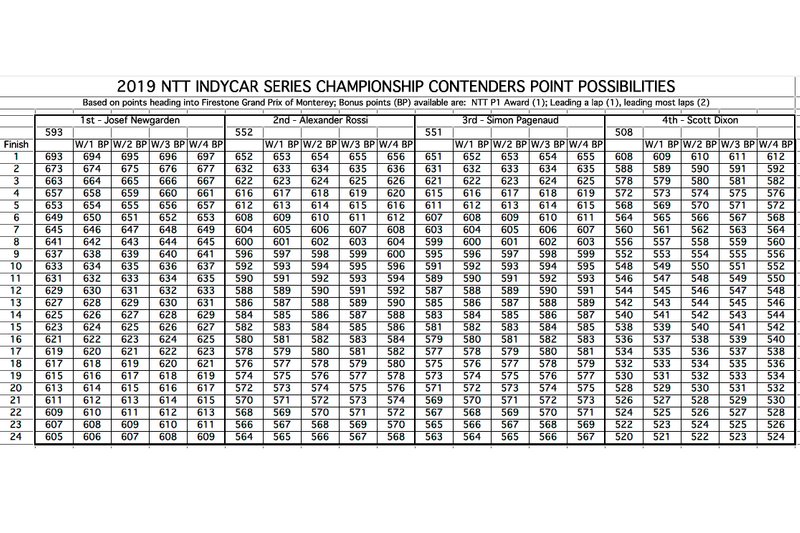 Rosenqvist: “IndyCar is the toughest beast yet”