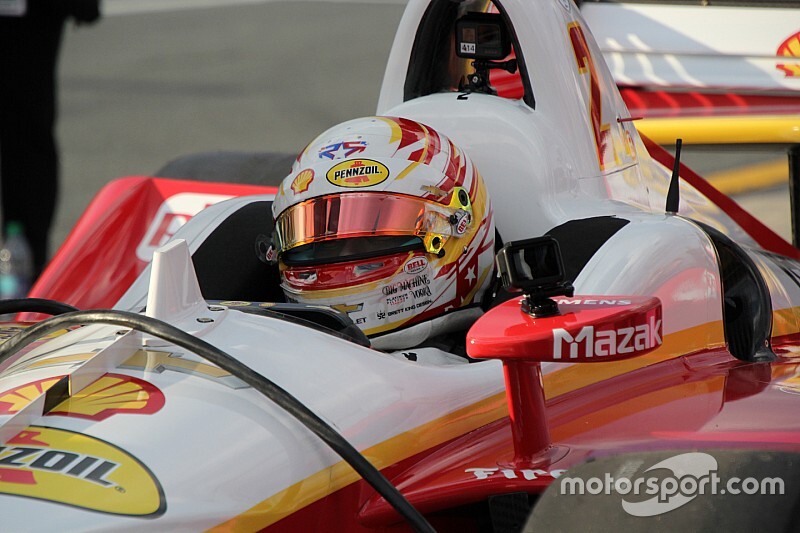 Josef Newgarden completed his 2019 IndyCar Series victory tour with some laps in the heart of NASCAR.

Newgarden was driving the car used by Penske teammate Simon Pagenaud in last weekend’s IndyCar Series finale at Laguna Seca, the race in which Newgarden clinched his second IndyCar championship.

“We just wanted to come celebrate our achievements and put on a little bit of a show and I have to thank Pennzoil so much for making it happen,” Newgarden said after taking his laps around the 17-turn, 2.28-mile course which combines the oval track and infield road course.

While preparing for his laps around the track and after, Newgarden’s teammates on the NASCAR side, Joey Logano and Ryan Blaney, spent several minutes debriefing with him.

“I think they are just curious, you know?” he said. “I think when I show up on a NASCAR weekend like this, I go and see them and ask them how they’re doing and if they didn’t put it on pole, ask them why they didn’t qualify first.

“I was hoping to get in one of their cars today.”

In a news conference earlier Friday with Logano and Penske president Tim Cindric, Newgarden said he had spent an hour running some computer simulations trying to learn the Roval.

“I’ve never seen this track, never driven on it in anything,” he said. “So, I got a little taste on a desktop computer just to try and figure out where they heck I was going and get my gears sorted out in my head.”

Logano was certain Newgarden’s lighter, more nimble race car would go faster than Logano’s No. 22 Ford and he was right. Newgarden appeared to make laps about 13 seconds faster than the Cup cars ran on Friday.

“I think there was maybe another couple seconds in it but I didn’t want to make a mistake in front of everybody showing off,” Newgarden said. “I wasn’t taking it easy, I can tell you that.

“It would have been the same for the NASCAR guys if they went out after me, they would have seen the track get better as well. It’s just a process you go through.”