Official: Villeneuve to race the Indy 500

42-year-old Canadian Jacques Villeneuve will be back at the 'Speedway in 2014.

It’s official. Jacques Villeneuve will be back at the Indianapolis Motor Speedway this coming May.

The Schmidt-Petersen team made it official this morning with a press release. He will be making the start 19 years after his victory in the Indianapolis 500 in 1995.

"To have the opportunity to return to Indy car racing and the Indianapolis 500 is something I never thought possible," Villeneuve said. "The memories I have there will stay with me for the rest of my life, and I'm excited to create new memories in 2014."

Villeneuve has raced in everything from IndyCar and Formula One cars, to full bodied stock cars and starting this year, nimble Rallycross machines. 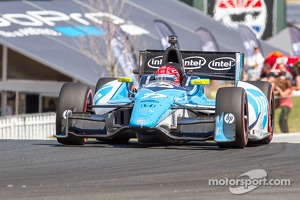 "I've been fortunate enough to compete in several of the world's top racing series, and nothing excites me more than entering the IndyCar Series at its current level of competitiveness," Villeneuve said. "Schmidt Peterson Motorsports has proven itself able to compete with the largest of teams, and I am excited to get to work with Sam and the team and start preparing for May."

IndyCar’s Mark Miles is excited for the return of a former champion, adding that this year’s month of May will be very exciting.

"This May is shaping up to be unbelievably exciting, so the return of Jacques Villeneuve to the Indy 500 couldn't be better timed," said Mark Miles, CEO, Hulman & Company. "Race fans from around the world will be dialed in to see a champion return to the track. We can't wait to welcome him back to the Indianapolis Motor Speedway."

"We're very pleased to have a driver of the caliber of Jacques in our lineup in May," Sam Schmidt said. "He's a former winner in the event and brings tremendous experience from his success in the world's top racing series. The trust Jacques is putting in Schmidt Peterson Motorsports also validates the progress all of our team members have made in creating an organization capable of competing with anyone."

Villeneuve, "excited to make memories in 2014"