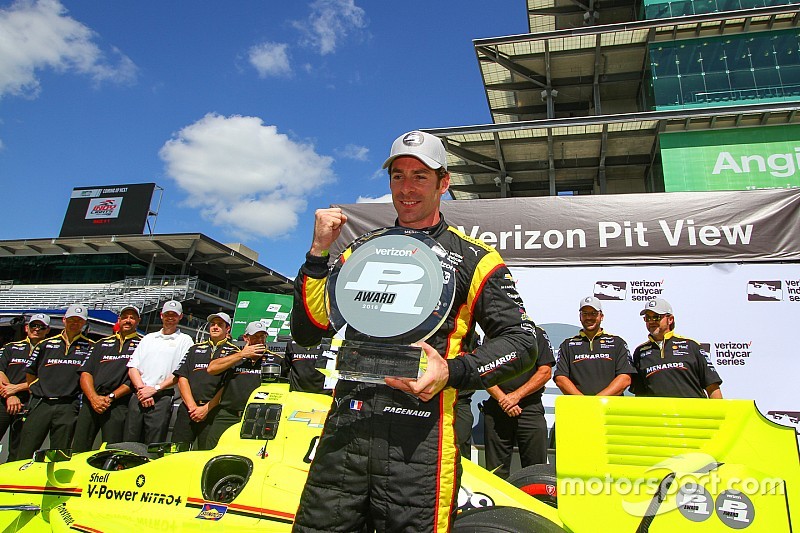 The Team Penske-Chevrolet of Simon Pagenaud grabbed a relatively easy pole position on the IMS road course after teammates Will Power and Juan Montoya, and Chip Ganassi Racing’s Scott Dixon, eliminated themselves early.

The second straight pole for dominant championship leader Pagenaud came as a result of a 1min 08.6868sec lap, which eclipsed surprise front-row starter Charlie Kimball of Chip Ganassi Racing-Chevrolet by some three-tenths of a second.

It marks the fourth pole of Pagenaud's IndyCar career and his second on the bounce. The championship leader has finished no worse than second so far this season.

A string of strange mistakes

But the story of the event was a sequence of strange incidents in Q2 that saw three of Pagenaud's fastest championship rivals eliminate themselves with errors.

Montoya had missed the first five minutes of the 10min segment as punishment for ignoring the checkered flag at the end of Q1/Group 1 segment. However Power made a mistake going into Turn 12, pulled over to allow Montoya through, thinking JPM was on a flyer but about to pit. But the Colombian didn’t pit which compromised Power’s next flying lap with dirty air.

This clumsy and slow Penske two-step maneuver also served to hold up Dixon, but the reason Dixon was right behind the silver Verizon pair was because of his own mistake at Turn 12 which had forced him to let the Penskes go.

The end result is a slightly strange-looking lineup at the front of the grid, with three Chevrolet and three Honda cars filling the top six. Predictably, Graham Rahal’s Rahal Letterman Lanigan Racing machine is the best of these, in third, while James Hinchcliffe has put the Schmidt Peterson Motorsports-Honda into fourth.

Josef Newgarden will start fifth for Ed Carpenter Racing-Chevrolet, with Jack Hawksworth sixth, at last fulfilling the promise of the AJ Foyt Racing-Honda team have shown through practice sessions at several road/street courses this season.

Tony Kanaan is the second of the Ganassi cars, and will be joined by his long-time sparring partner Montoya on row 4, while Dixon, Sebastien Bourdais (KVSH-Chevy), Mikhail Aleshin (Schmidt) and Power fill out the top 12.

Alexander Rossi’s 1min 09.1475sec was easily the best of the Andretti Autosport quartet, but like them he was eliminated in Q1 and will be 14th on the grid.

Matt Brabham threw in a very stout 1min09.2944sec at the start of Q1 Group 2, as he went out on red (soft) tires immediately but didn’t have enough fuel to complete a second flyer which possibly cost him a chance of graduating to Q2.

Remarkably, the American-Australian will join Helio Castroneves on Row 8, as the Brazilian Penske ace was the main casualty of Q1 Group 1, braking troubles that have plagued him throughout practice causing a couple of trips through the grass at Turn 6.