The inaugural Grand Prix of Indianapolis was action-packed and fuel mileage became the name of the game at the end of the race.

Indianapolis, Ind. – Simon Pagenaud raced to victory in the inaugural Grand Prix of Indianapolis at the iconic Indianapolis Motor Speedway.

Winning for the third time in his career, Pagenaud drove the Schmidt Peterson Hamilton Racing Honda. He bested runner-up Ryan Hunter-Reay by a mere .8906 seconds, as both drivers were not only trying to win the race but trying to save fuel at same time.

Said the victor, “This is unbelievable but very nerve-wracking, as we were trying to save fuel. The fuel we saved was amazing. I was worried about Helio (Castroneves) coming back. I just kept working on my lap times. I don’t like this fuel-saving thing, but I am glad it worked out. My team gave me the fastest car out there, so I had no other choice other than winning.

“Going into the race, I thought we had a shot from the fourth spot. Today was very stressful. Around halfway, my team started telling me to save fuel, which I did. My hat is off to Honda for giving me such a great engine. The last 15 laps were very difficult trying to hold them off and save fuel, but it worked out.

“Two great things happened to me today – Mario Andretti gave me the winner’s trophy, the biggest one I have ever gotten and secondly, I am very proud to be the second Frenchman to win at Indianapolis. ”

Pagenaud led twice for a total of six laps. 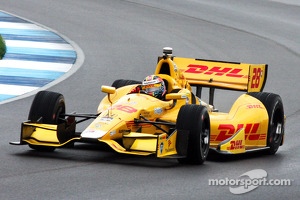 Hunter-Reay held on for second with Castroneves 1.8 second behind the winner.

Commented Hunter-Reay, who led 18 laps, “When the race started, the rhythm got crazy. At times, we didn’t know who we were racing as the strategies were off. It was a busy day and a lot of fun, but I did not like saving fuel at the end.

We (winner Pagenaud and Hunter-Reay) were saving the same amount of fuel, and then they gave me the green light to go. I thought I had a shot at the end, but it didn’t work out. We are saving that last step of the podium for the big race at the end of the month.” He was nearly caught up in the starting line accident and felt lucky to have made a saving maneuver.

“For some reason, I told myself before the race, ‘Expect something strange to happen on that front row,’ and I was ready for it and managed to miss Saavedra,” he noted. “I went to the inside and threaded the needle.”

Celebrating his 39th birthday, Castroneves led 15 laps and credited his strong run to the strategy calls made by team owner Roger Penske. He drove the Verizon Team Penske Chevrolet, giving the manufacturer its best finish. 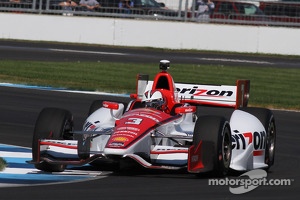 “The car was very strong at the end and without a morning warm-up, we didn’t know what to expect,” said Castroneves. “We got a good start from 10th and moved to the front. Roger (Penske) is one of the great strategists. I didn’t know where I was, but he had me pushing, pushing and pushing. I was so focused. We have great momentum going for us, and although I wanted to win, I can’t underestimate the momentum we have.”

Sixth through 10th were Ryan Briscoe, early leader Jack Hawksworth, Will Power, Takuma Sato and Tony Kanaan. Hawksworth led the most laps, 31, but he got off-strategy after a strong run.

James Hinchcliffe pulled off the course after something happened to him. He was last seen on a stretcher being taken to a nearby hospital.

The race marked the fourth Verizon IndyCar Series race of the season, and all four have been on street and road courses. Today’s 82-lap GP was staged on the 14-turn, 2.349-mile road course.

A major crash marred the start. It started when pole-winner Sebastian Saavedra’s car wouldn’t start and the hapless driver was struck first by Carlos Munoz and then at speed by rookie Mikhail Aleshin, who had started last. The latter’s car landed atop Saavedra’s, scattering parts in every direction. Carlos Munoz was also involved.

The scary accident took place at the outset of the second standing start of the season. “I don’t know if it was electrical or what. As soon as I released the clutch, you went from 11,000 RPMs to zero,” Saavedra said. “Very sad because we did an amazing job. This should not have happened.”

Three other lesser incidents slowed the race without damage. In total, there were 19 caution laps.

The 82-lap race took two hours and four minutes to complete. The average speed was 96.462 miles per hour.

Scott Dixon had the fastest lap at 124.711 mph. He ended up 15th after drawing a penalty for an altercation with Power.

Hinchcliffe Update - James Hinchcliffe was taken to IU Health Medical Hospital where he underwent a CT scan of his head and neck. According to IndyCar medical director Dr. Michael Olinger, Hinchcliffe was diagnosed with a concussion and will need to be re-evaluated before being cleared to drive.

More from
Will Power
Gateway
IndyCar