National Guard Panther Racing driver JR Hildebrand battled back from an early incident with Raphael Matosthat put the IZOD IndyCar Series rookie a lap down in 25th position to collect a 13th-place finish in the Honda Grand Prix of Alabama. In his fourth career start, the league rookie passed four cars for position in the final 18 laps at Barber Motorsports Park to maintain the lead of the IZOD IndyCar Series Rookie of the Year standings. 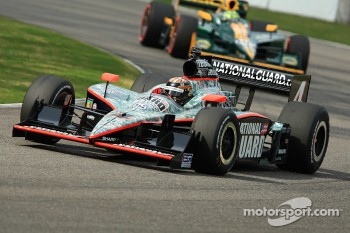 Today's result combined with an 11th-place finish in St. Petersburg has placed Hildebrand in the 13th overall spot in the IndyCar point standings.

After starting in the 15th position, Hildebrand had contact with Matos as the two cars exited Turn Six on the 17-turn, 2.38-mile course, which caused Matos to spin directly in front of the No. 4 car. Hildebrand had to pit under green for a new front wing and quickly fell a lap down to eventual winner Will Power. Hildebrand then suffered contact with Graham Rahal in the same corner on Lap 38 when Rahal attempted to pass the No. 4 car on the inside and made contact with Hildebrand's left-rear tire, which caused him to spin out. Rahal apologized to both Hildebrand and Panther crew members after the race for the contact.

The Panther team was able to stay on pace and a caution flag on Lap 58 allowed the Californian to get back on the lead lap as they stayed out while the leaders pitted, and then jumped into the pits on a restart on Lap 61 for their final stop of the race. Hildebrand returned to the field in 17th position but was able to quickly pick up some spots and move back up the grid. He passed Alex Tagliani on Lap 72, Ryan Hunter-Reay and Takuma Sato on Lap 77, Danica Patrick on Lap 80 and then spent the remaining 10 laps chasing former Panther driver Vitor Meira.

Hildebrand and his Panther teammates will now travel back to the 23-year-old's home state of California for the Toyota Grand Prix of Long Beach, which will be broadcast live on VERSUS next Sunday at 3:30 pm with additional coverage provided by the IMS Radio Network, XM Channel 145 and Sirius Channel 121.

We made a lot of improvements over the weekend, and there were some things during that race that could go our way next time.

"We got caught up in a couple messes and it was one of those instances where one things leads to another. My front wing got damaged on the first lap getting caught up with Matos; we had contact and then he spun around and I drove into him. So we had to come in and pit to change the wing under green. Then I was on primary tires and Graham Rahal was coming into (turn six) with a head of steam and clipped my right rear tire and spun me around, but luckily I was able to clutch it and keep it running. From that point on it was time to fight through it and we got fortunate with the way the last round of pit stops worked and got our lap back and were on the same sequence as a bunch of cars. Then we were able to fight back in the National Guard car and pick up three or four more spots there towards the end, and I was pretty pleased with that, given that this is one of the tougher tracks for passing. I feel bad for the Panther guys because with all of the carnage and stuff we realistically could have ended up in the top five or six. We made a lot of improvements over the weekend, and there were some things during that race that could go our way next time."