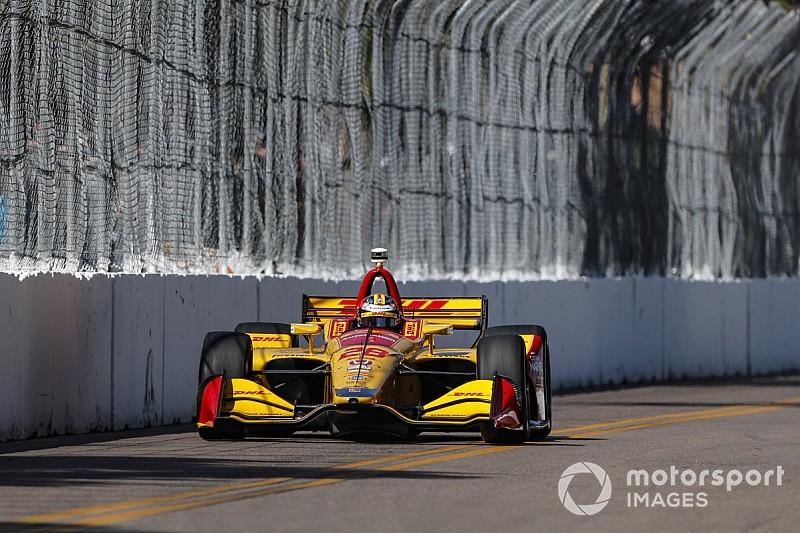 Ryan Hunter-Reay grabbed top spot in the final practice for the Firestone GP of St. Petersburg before qualifying for the opening round of the NTT IndyCar Series season.

The Andretti Autosport-Honda ace took just 60.8966sec to lap the 1.8-mile street/airport course, but was only 0.0039sec faster than Josef Newgarden who headed a Team Penske-Chevrolet revival after a disappointing Friday.

Newgarden’s teammates Simon Pagenaud and Will Power were fourth and fifth, separated from their sister car by Takuma Sato in the Rahal Letterman Lanigan Racing-Honda.

There was little time-wasting at the start of the session, with several big hitters taking to the track within the first 10 minutes including all three Penskes, and two-time and defending St. Pete winner, Sebastien Bourdais in the Dale Coyne Racing with Vasser-Sullivan-Honda.

The session was stopped 15mins in, just after Hunter-Reay went top when one of his teammates Zach Veach spun under braking for Turn 13, went off and backed his Andretti car into the tire-wall.

With 17mins to go, Hanley’s stalled DragonSpeed car at Turn 4 brought out another red.

In the closing eight minutes, Max Chilton went into a run-off area and stalled, causing a third red flag while Ed Jones ended the session slightly early with a red/checkered. That was a result of him parking his Ed Carpenter Racing-Chevy in a runoff area just after grabbing sixth place.

The two Chip Ganassi Racing-Hondas of Scott Dixon were seventh and eighth ahead of the Harding Steinbrenner Racing-Honda of Colton Herta. Marco Andretti in P10 might have been faster but got held up on his final flyer by Bourdais.

The most positive story of the session was Matheus Leist grabbing 11th for AJ Foyt Racing-Chevrolet, within half a second of Hunter-Reay’s top time.

Wickens: Racing in IndyCar again is “the dream”