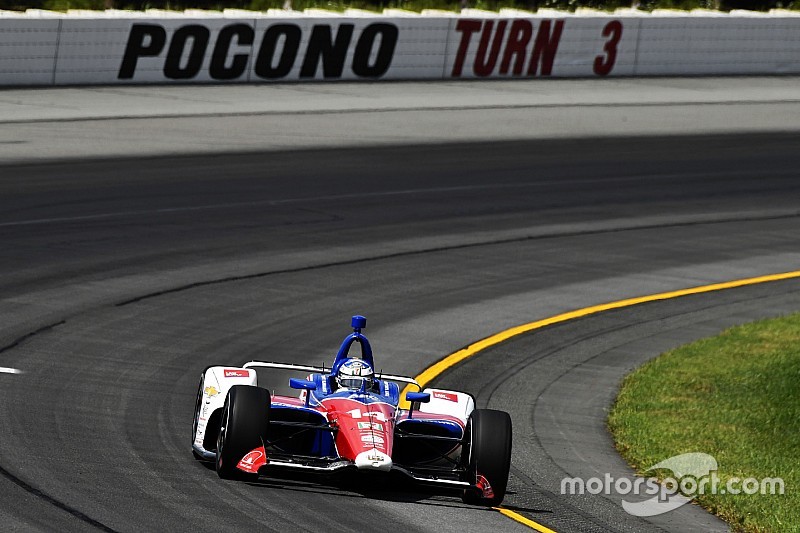 Tony Kanaan returned AJ Foyt Racing-Chevrolet to a position of prominence with fastest time in the only practice session for tomorrow’s ABC Supply 500 at Pocono Raceway.

And while the cancelation of qualifying will mean Kanaan will have to start from 19th– the grid is set according to entrant points – the 2004 series champion and 2013 Indy 500 winner can at least console himself in the knowledge he has a fast car in the draft.

The 44-year-old veteran lapped the course at 216.354mph, and should he get up front in the race, he’ll be happy to learn he had fifth fastest time of the laps set without the aid of a tow.

Second fastest was his former Chip Ganassi Racing-Honda teammate Scott Dixon, who won the race here in 2013 when IndyCar made its return after a 24-year hiatus. He was 0.6mph slower, just bumping impressive rookie Santino Ferrucci of Dale Coyne Racing down to third in the final five minutes.

Despite missing 40mins at the start of the session with gear-selection issues, Simon Pagenaud was fifth overall and second fastest in the no-tows, while his teammates Josef Newgarden – who will start P1 tomorrow – and Will Power – a two-time winner here – were only 17thand 20th. However, they were within the top 10 on no-tows.

Rookie Colton Herta’s Harding Steinbrenner Racing-Honda was sixth quick ahead of the Coyne with Vasser-Sullivan  car of Sebastien Bourdais.

Series returnee Charlie Kimball – who will make his fourth of five scheduled starts this year for Carlin Racing-Chevrolet – was very impressive in eighth ahead of 2015 Pocono winner Ryan Hunter-Reay, and Graham Rahal who appeared to make a breakthrough late in the session to grab 10th.

Weather allowing, the race is due to get the green flag at 2.45pm local (Eastern) time tomorrow.

IndyCar qualifying at Pocono canceled due to bad weather