Pocono IndyCar: Power scores stunning win from a lap down 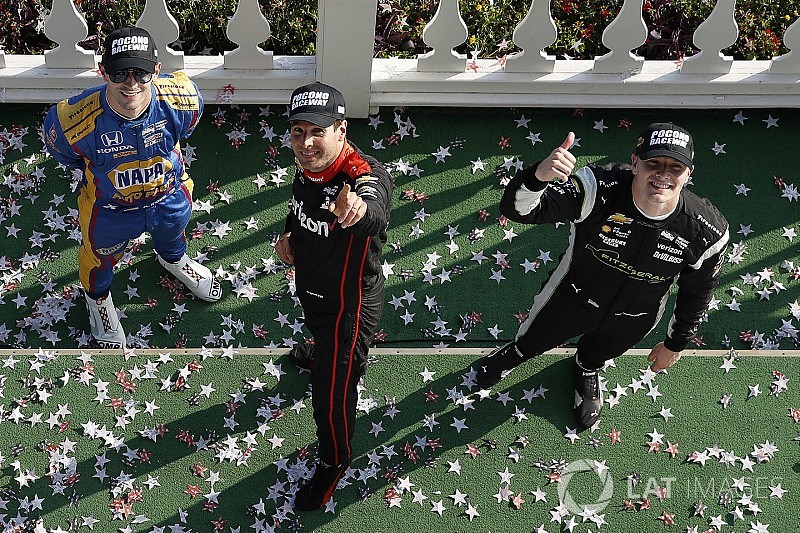 Will Power scored the 32nd victory of his IndyCar career, storming back from a lap down to edge championship-leading Penske teammate Josef Newgarden and Alexander Rossi's Andretti Autosport-Honda.

Chip Ganassi Racing-Honda’s Tony Kanaan made a typically bold move to edge into the lead at the start ahead of Alexander Rossi’s Andretti Autosport-Honda, Will Power’s Penske-Chevrolet, Charlie Kimball (Ganassi), Simon Pagenaud and Josef Newgarden (both Penskes) who was up from 14th on the grid to seventh.

However, Helio Castroneves made the strongest start, from 20th to 11th, although he’d soon lose a couple of places as he ran too high. Power, in the lead Chevy-powered car, passed Sato at the start of the fifth lap, and Kimball, Pagenaud and Newgarden soon demoted the polesitter, too.

Scott Dixon’s Chip Ganassi Racing-Honda was up past Sato and into eighth by Lap 8, and then passed teammate Max Chilton for seventh. The pair of them would demote Newgarden by Lap 15.

Up front, Rossi grabbed the lead from Kanaan on Lap 12, as Sato continued to tumble back to 15th, complaining of the car’s handling in Turns 1 and 3. Dixon’s progress in these early stages seemed inexorable, passing Pagenaud on Lap 18, and Chilton soon followed his team leader through.

Dale Coyne Racing-Honda’s Esteban Gutierrez had risen to 11th when he made contact with the outside wall exiting Turn 3 on Lap 23, breaking off rear wing elements and bringing out the yellow for debris.

Everyone took the opportunity to pit, and Rossi retained the lead but Power’s crew pulled off a good stop to jump him up to second, while the Ganassi #9 crew boosted Dixon up to fourth behind Kanaan, and James Hinchliffe’s Schmidt Peterson Motorsports-Honda team sent him from 10th to fifth, ahead of the injured Ryan Hunter-Reay of Andretti Autosport, Graham Rahal’s Rahal Letterman Lanigan Racing-Honda, Castroneves, Newgarden and Pagenaud.

The man to lose out massively was Chilton who emerged 21st after a turbo wastegate issue obliged the crew to remove the rear bodywork. He was now classified ahead of only Gutierrez whose wall contact had eliminated him.

The Lap 27 restart saw Power go around the outside of Rossi but he didn’t take the lead because Kanaan swept around the pair of them, and Rossi’s compromised line lost him a place to Dixon who next time by demoted Power, too. Up to fourth was Hinchcliffe ahead of Rahal, as Rossi fell to sixth.

Dixon hit the front on Lap 30, as Hinchcliffe got Power, which allowed Rahal and Rossi to also pass the top Penske runner. That accolade passed to Pagenaud on Lap 32, then Newgarden after they both passed Power.

Hinchcliffe split the Ganassi drivers at the front to grab second on Lap 33, while Rossi’s failed attempt to pass Kanaan dropped him behind Newgarden. With the top 20 covered only by nine seconds, any failed pass was going to cost the drivers a spot.

One of the drivers who had a brilliantly fast pitstop, Marco Andretti, was up to eighth past Power on Lap 36, and started trying to chase down Pagenaud, while Hunter-Reay moved past Castroneves to get into the Top 10 on Lap 41.

Rossi started to move forward just before quarter distance in the 200-lap race, passing Kanaan for fourth on Lap 46, and ahead of Hinchcliffe for second on Lap 48, while Newgarden demoted Rahal to fifth, and Power moved back past Andretti for eighth.

Newgarden also elbowed Kanaan aside to grab fourth on Lap 49. The championship points leader may have underperformed in qualifying, but he was driving a sensible yet incisive race. He was ahead of Hinchcliffe on Lap 52, with only Dixon and Rossi ahead, but Newgarden’s plans stalled when Hinchcliffe repassed the following lap. Simultaneously, Pagenaud moved past Rahal for fifth.

As leader, Dixon had been burning more fuel, and ducked into the pits on Lap 54 leaving Rossi in charge. Newgarden and Pagenaud also pitted on Lap 55, and Rossi, Hinchliffe, Kanaan, Rahal and Hunter-Reay stopped on 56. Power was able to go a lap longer before stopping.

As the order shook out following this second round of pitstops, Dixon regained the lead ahead of Rossi, Hinchcliffe, Newgarden, Kanaan, Power, Pagenaud, Andretti, Rahal, Hunter-Reay and Castroneves.

Rossi passed Dixon for the lead at Turn 3 on Lap 60, and Pagenaud drafted past Power for seventh the following lap before his teammate returned the favor next time by and kept on charging, grabbing fourth from Kanaan briefly. The repass cost Power a lot of momentum and he plummeted down to 12th with a front wing problem as the snap adjuster in the nosecone broke, leaving the front wing adjusting itself! The stop cost Power a lap.

Dixon moved back to the lead, as Hinchcliffe also demoted Rossi, while Pagenaud and Kanaan were trying to hold off the charging Andretti and the remarkable Hunter-Reay.

Rossi got back past Hinchcliffe at Turn 3 on Lap 78, and four laps later he was into the lead as Dixon again had to stop early. Hinchcliffe would soon pass the #98 Andretti car. Meanwhile, Kanaan bogged down after a late pass by Hunter-Reay and fell down to eighth, just before he joined the majority of the field in the pits. Hinchcliffe was the big loser, skating way past his crew. He’d emerge 12th.

Dixon held a 2.5sec lead over Rossi after the stops, chased by Hunter-Reay, Rahal, Pagenaud, Newgarden, Kanaan, Andretti, Castroneves and Kimball. That order shuffled rapidly though, as Andretti fell back behind Kanaan, Pagenaud and Castroneves.

After charging hard after the leader, on Lap 98, car #98 hit the front once more sweeping around Dixon at Turn 1. Two laps later though it was Hunter-Reay in front. Adrenaline can be a powerful medication.

Further back , Andretti regathered his momentum and he and the recovering Hinchcliffe moved past Castroneves. Hinchcliffe had a horrendous sideways moment exiting Turn 1 – which he saved somehow – but it dropped him to 14th.

Rossi got back in front on Lap 103, while Dixon stopped on Lap 112, with Pagenaud doing likewise a lap later having struggled with fuel mileage and speed all day.

The flurry of pitstops that followed on Lap 116 coincided with Saavedra slapping the wall at Turn 2 trying to get around Carlos Munoz’s recently stopped AJ Foyt Racing-Chevrolet.

Newgarden, Castroneves, Andretti, Hinchcliffe, Hildebrand, Sato, Ed Jones, Kimball were caught out as the pits closed under the yellow. When the cars lined up again, it was in the order Hunter-Reay, Rahal, Kanaan, Dixon, Rossi (who had a slow stop when a changed wheel rolled away), Pagenaud, Munoz, Carpenter, Daly, Castroneves, Newgarden, Andretti, Hinchcliffe, Hildebrand and Sato.

Power was 19th, back on the lead lap, and under yellow repeatedly kept topping up with fuel – which would prove invaluable later.

The restart came on Lap 122 and Kanaan and Rahal immediately jumped Hunter-Reay before Rahal dived past Kanaan at Turn 3 to take the lead, with Rossi, Dixon, Pagenaud and the impressive Munoz giving chase. Then Kanaan retook the lead, just before Hinch got pinched down on the inside line by Hildebrand, made contact with the Ed Carpenter Racing-Chevy, and the pair slid up into the outside wall.

Power dived into the pits from 16th after a decent restart to top off with fuel and got a new rear wing after being struck on the rear by Kimball as they braked to avoid the Hildebrand/Hinch crash. Now with a new, more downforce-laden rear wing, he was able to resume on the lead lap, although he dropped back to 17th after another stop just before the green.

More surprising was that one of Power’s teammates, Newgarden, also chose to stop. Meanwhile Daly and the three-laps-down Chilton also stopped to serve a penalty for service in a closed pits, while Andretti and Gabby Chaves of Harding Racing also stopped.

Rahal took the lead on the Lap 132 restart, but Kanaan got back through by the end of the lap, the pair of them chased by Rossi, Dixon and Hunter-Reay, with Pagenaud and Castroneves into the top eight along with Sato.

Rahal was back in front on Lap 134, Kanaan on 135, Rahal on 136, and so the back-n-forth continued, allowing Rossi, Dixon and Hunter-Reay to stay in touch. Dixon, RHR and Pagenaud, Castroneves and Munoz demoted Rossi to eighth by Lap 142.

Meanwhile, Power passed Carpenter for 12th on Lap 145, and then Kimball for 11th. Another noteworthy mover was Ed Jones in the Coyne car, lying eighth once Dixon pitted on lap 150.

Rahal, Kanaan and Pagenaud stopped on Lap 151, with the three emerging together with TK ahead of Graham and Simon. Hunter-Reay ducked out of the lead three laps later leaving Power in front, while Rossi and Jones stopped from second and third.

The action got frantic as the field blended back onto the racing line. Power was making hay meanwhile, setting two 217mph laps before stopping on Lap 161 while holding a 13sec lead. He emerged in front with a lead of 4.6sec over Kanaan, Rossi, Dixon, Newgarden, Castroneves, Hunter-Reay, Munoz, Pagenaud and Rahal.

Once Dixon established himself in the lead ahead of Rossi, he started chipping into Power’s lead, getting it down to 3sec by Lap 176, before pitting for the final time. Power went in next time by, to stay clear of the muddle of stoppers that would soon arrive.

Rossi had an excellent final stop to slot in as Power’s closest chaser, but Kanaan drafted past Rossi to get his deficit to Power down to 1.6sec. Then Rossi and Newgarden got past. Power was still not officially the leader as Andretti was hanging on out front with a pitstop still to come. That finally came – a tardy fuel only stop – on Lap 190.

That left Power up front but with Newgarden only 0.6sec behind him and with less downforce…

On Lap 194, Power swung low on the run to Turn 3 to try and break the tow, and did the same the following lap and on Lap 198. The tactic worked and kept Rossi in the game as he put the pressure on Newgarden.

On the final lap, again Power swung left to protect the inside, this time Newgarden followed him. It wasn’t enough to give Newgarden the lead but it left Rossi without a draft and protected second place.

Rossi duly took third but only 0.16sec ahead of Pagenaud who passed both lead Ganassi cars in the closing stages to storm toward the front.

Kanaan, with a broken front wing, beat Dixon to fifth, with Castroneves, Hunter-Reay, Rahal and Munoz completing the Top 10.

Power's win, which lifts him to a clear ninth in the all-time IndyCar record book, was his third of the year, and Team Penske's 195th in IndyCar racing.