Pole-winner Sato admits he was nervous after Hunter-Reay shunt 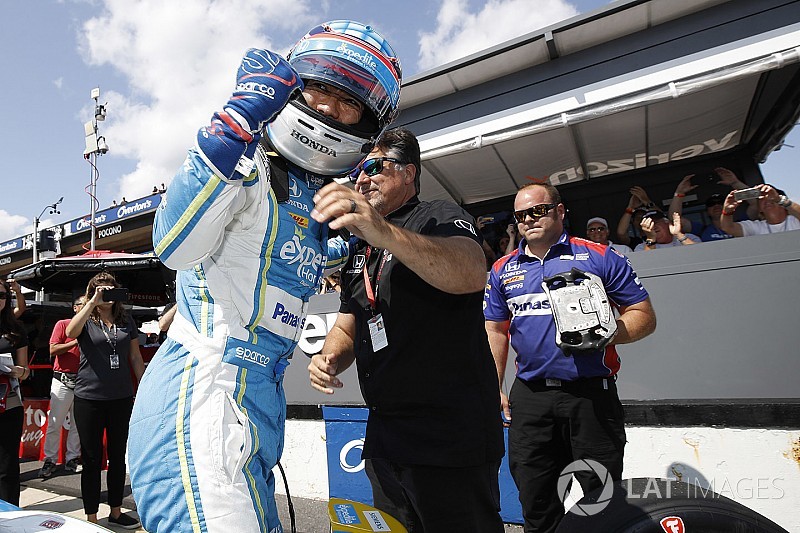 Takuma Sato, who will start tomorrow’s ABC Supply 500 at Pocono from pole position, admitted to nerves when teammate Ryan Hunter-Reay shunted just before his own qualifying attempt.

Sato became the only driver to crack the 220mph barrier on his opening lap, and his second was strong enough to score his second pole of the season and the seventh of his IndyCar career.

The reigning Indy 500 champion said afterward: “We try to get the great points coming out here because I think at superspeedways, Andretti Autosport have a great history. There's certainly no reason why we can’t challenge for the win in tomorrow's race.

“But I don't want to think about too much for the double 500 win. 500-mile race… it's so long. As you’ve seen in today's qualifying, anything can happen. I think not only my teammates, but also other drivers have challenging issues today, because of wind direction and because we trim so much.

“We see Ryan's moment. Really made me nervous because he was just in front of me. We share a lot of parts and philosophy on the car. So it's correct to expect what he has is what I have.

“Alexander [Rossi] came to me before qualifying, he told me what he felt from Lap 1 to Lap 2, Turn 1 to Turn 3. Because here it's a lot of downshift. We had to deal with the weight jackers, had to really work on that. Everything was proactive.

“I was able to put down a great lap, and I really have to say thank you to all my team.”

Sato admitted that he came very close to the wall exiting Turn 1 on the second of his two laps, and that he had to lift off the throttle twice. However, he said that unlike his wild run to fourth on the grid at the Indy 500, he didn’t actually make contact with the wall.

“It was actually good. Nice and tidy, and very smooth. But then there are times of tire degradation because, as I said, we are extremely trimmed. The car got into a slide into Turn 1 on the second lap. The car just couldn't make it, so I had to lift a couple of times, quick lift, then manage it, just manage it.

“Still I think we kept reasonably good momentum, so I think the second lap was still very fast. I think the car worked really well.”

Sato said Hunter-Reay’s shunt and the subsequent clean-up gave his engineer Garrett Mothersead time to make a slight tweak to the #26 car’s setup.

“As I said, Ryan and I share a lot of philosophy and setup,” he explained. “What happened to him is what could happen to me, too. It sounds like he dropped a wheel to the inside of the yellow line in turn three, made the car upset. What made him do so, I don't know.… I really need to ask what Ryan says.

“But anyway, what happened, most important thing, it's not failure, it's not something coming from nowhere, so basically the engineers just go through the maximum data possible at that particular moment and maybe we back off a little bit on the front wing to a little bit secure the rear. That's what we did. The rest of it, we have to adjust.”