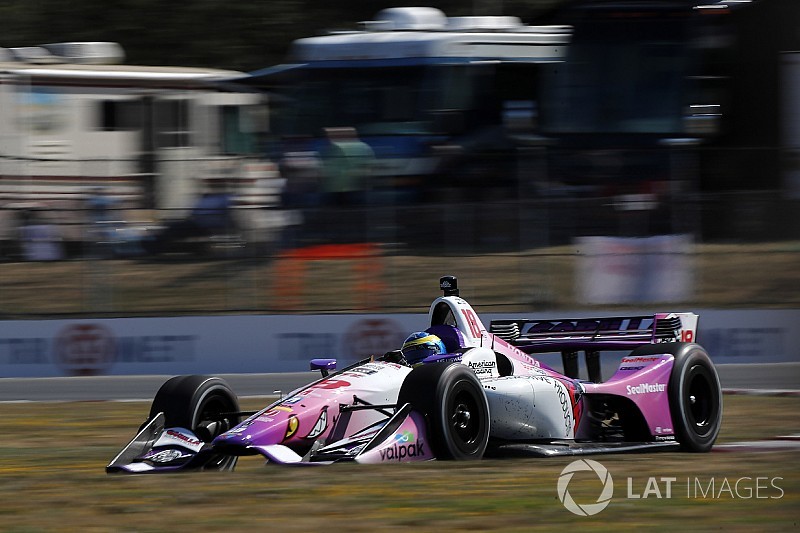 Sebastien Bourdais topped the final practice session for tomorrow’s Grand Prix of Portland, but on his very next lap he shunted hard exiting Turn 9 where the car appeared to bottom out and spun off the track and into a tire wall.

The 2007 Portland GP winner was able to step out of his Dale Coyne Racing with Vasser-Sullivan Honda unaided after his 135mph shunt, but the session around the 1.964-mile road course was brought to a premature halt.

Bourdais’ best lap was 0.0435sec faster than that of his 2007 teammate Graham Rahal, as the Rahal Letterman Lanigan Racing-Hondas bounced back from a mediocre Friday to finish second and fifth (Takuma Sato), in a session littered with minor mistakes.

Pietro Fittipaldi was the first to make a noticeable error, taking a trip through the Turn 1 escape road, while James Hinchcliffe at the start of a flying lap made it through Turn 1, but he clipped the apex of the chicane ‘triangle’, Turn 2, just a little too hard and couldn’t catch the tail of the Schmidt Peterson Motorsports-Honda before it ran off the road at Turn 3 and struck the tire wall. That inevitably caused a red flag, and following the crew’s attempts to make a repair on pitlane, the car was towed back to the paddock.

Sato and Will Power (Team Penske-Chevrolet) also had minor off-course excursions into the grass, with Power also exploring the Turn 1 runoff through the chicane, and AJ Foyt Racing’s Tony Kanaan and Matheus Leist doing the same a few minutes later.

Towards the end of the session, Max Chilton spun his Carlin Racing-Chevy through Turn 1, Fittipaldi visited on the sand and grass, and Alexander Rossi also tripped the wrong way through Turns 1-3 but was able to finish the session in fourth. That was just behind Power who finally strung three strong sectors together to end up a mere 0.08sec behind Bourdais, and 0.037 off Rahal.

Spencer Pigot did a great job in the Ed Carpenter Racing-Chevy to wind up sixth, ahead of three Andretti cars and the second of the Penskes, that of Josef Newgarden.

Scott Dixon, Chip Ganassi Racing-Honda’s points leader, was only 11th, ahead of Jordan King and series returnee Santino Ferrucci in a third Dale Coyne Racing-Honda. Fittipaldi was only 17th but two places ahead of the third Penske of Simon Pagenaud, who remains struggling with his car’s ‘loose’ rear end that is almost a prerequisite to be fast around this course.