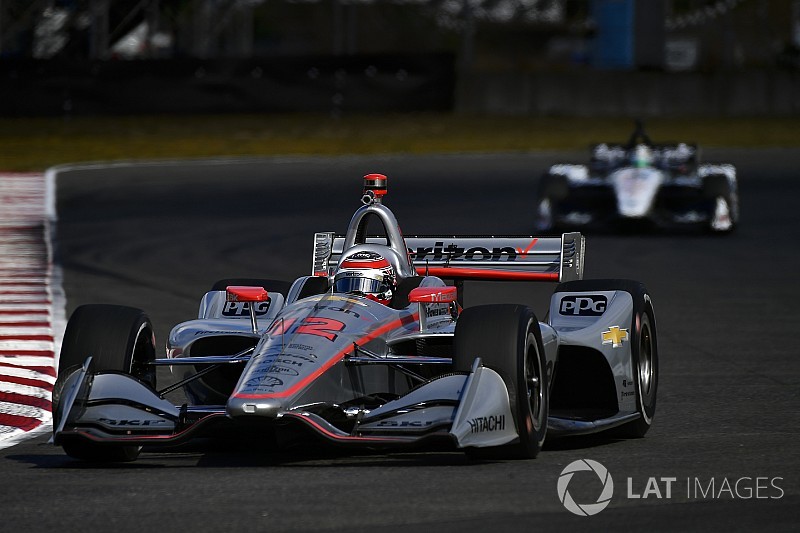 Will Power put Team Penske-Chevrolet on top in FP2 for the Grand Prix of Portland as teams had the chance to try the red alternate tires, while Marco Andretti echoed his strong testing and FP1 form by finishing second.

Takuma Sato ran off the track at the long Turn 11 bringing out the red flag around a dozen minutes into the session, as he went on head on into the tire barrier and broke his front wing.

That was right after Power went to the top of the times on black primary tires, ahead of Alexander Rossi’s Andretti Autosport-Honda, Jordan King’s Ed Carpenter Racing-Chevrolet and Ryan Hunter-Reay in another Andretti entry.

Ferrucci then displaced Power by being first to switch to the softer alternate ‘red’ Firestones, getting his time down to 57.4818sec – 123.002mph – but just as Power and others went out for their first red-tire run, teammate Simon Pagenaud’s miserable day continued, understeering into the Turn 11 tires and bringing out a second red flag.

Andretti and then Power went to the top of the times, the latter setting a 57.4053 – 123.166mph – while Jack Harvey (Meyer Shank Racing SPM-Honda) and Gabby Chaves (Harding Racing-Chevrolet were in strong fourth and sixth places. However, an improvement from points leader Scott Dixon displaced them both.

Yet Ferrucci’s best held firm for third, only 0.0765sec off top spot, and ahead of Harvey, Josef Newgarden’s Penske, Chaves, and the second Andretti car of Zach Veach.

FP3 follows tomorrow at 11.10am local (Pacific) time, with qualifying starting at 3.20pm.