Power: After a day “you’d feel naked” without aeroscreen 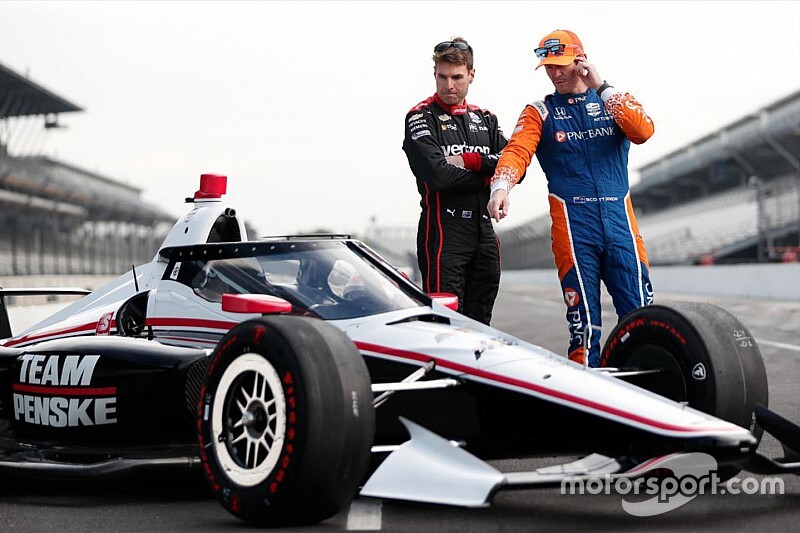 Will Power says that after just a day of testing IndyCar’s new aeroscreen along with Scott Dixon, he’s so accustomed to the Red Bull Advanced Technologies-developed device that he would feel “naked” were it removed.

Dixon said: “It’s been an intense project and one that a lot of people have done their due diligence on to get it to this point, and today has been pretty much seamless.

“We went through a bunch of configurations for cooling and where we can push the air to control the helmet – how it feels and how much pressure you have there. Ultimately it’s just very quiet. I can hear my radio for a change – normally I can’t hear it, so that’s kinda nice! But there’s actually a lot less load on the helmet too.

“Visually there’s been really no impairment. Some of the areas with tear-offs and where they seam in the middle [either side of the centerline wicker which now extends beyond the middle of the nose and up the aeroscreen] will be fixed down the road to make it even better.

“But ultimately, today we’ve just run through a long list of projects we needed to get through and it’s been pretty seamless.”

Stated Power: “I’m so impressed with how quickly this all came together, and really no major issues. Just like Scott said, the tear-offs is something they’ll work on and how they fit… but the vision’s fine, there’s no problem in doing a stint with bugs and stuff that get on the screen.

“Little things need to be worked on, but honestly, I’m so happy that we have it. It’s really a huge step in safety and I think it’s the best of both worlds – you’ve got a ‘halo’ and you’ve got a screen. I think that you’ll see other open-wheel categories follow suit…

“When you’ve driven it for a day, you’re going to feel naked without it. If you took it off, you’d feel naked because there’s so much protection there. Very, very happy that we’re moving ahead with it.”

He later commented: “You could race it this weekend, no problem. That wouldn’t be an issue. That shows how good a job they’ve done, bolting it straight on. That’s what you get when you work with the best people in the game like Red Bull Advanced Technologies and of course IndyCar and all the partners involved.”

How does it feel?

Both drivers said that worries over an IndyCar’s new weight distribution affecting the right-front tires had, so far, proven wide of the mark, although they were interested to note other changes, such as improved balance and “weird” quietness.

Regarding airflow, Dixon commented: “There's multiple different choices. You know, you had the winglets up top that I think adjusted how the helmet felt and how the air pushed down on it, back or forward, with the air vents at the front. I think between Will and I, we actually found a pretty good compromise, and a very similar feeling.

“It's super-quiet. I think compared to having your head exposed and all that wind and all the noise, it's almost like you're in a road car driving around. It's extremely quiet. You hear the engine a lot more. It's kind of weird actually. It felt very odd… But it feels, as Will touched on, extremely safe, and it would be very strange taking it off now.”

Speed-wise, the drivers agreed there was no noticeable difference between the car 2018-’19 car without the screen and how it will be from 2020. Post press-conference, the drivers ran 1.5-bar boost – up 0.1 bar from the Indy 500 settings for Fast Friday, Pole Day and Bump Day – and this will likely be adopted for those three days from 2020.

“Actually it was smaller [difference] than what I thought it was going to be,” said Dixon, 2008 Indy 500 winner. “It was almost neutral. If you were looking at Carb Day and race boost and all that kind of stuff, it's pretty similar without a tow. I think we all expected it to be a bit slower, but it was actually pretty good.”

Regarding the Firestones’ behavior, it was much as Bridgestone Americas chief engineer Cara Adams predicted last month – not an issue.

“[The revised weight distribution] actually makes the car more forgiving,” observed Power, who won the Indy 500 last year. “This car, when it was built, came with too rearward weight distribution, so everyone has done all they can to move that forward. So actually [the aeroscreen] puts it in a pretty good window, in my opinion, of weight distribution, and with a few adjustments it worked pretty well. I felt over the whole stint there was a pretty good balance. The tires really didn't feel that different to what we had, it's just a bit more forgiving now because you've got more weight up in front.”

Added Dixon: “I think there were a few variables. Today we had the new seal on the track and the tire dragger was here. But I think our long-run pace – actually we did two long runs on the '18 tire and then the '19 tire – and the '19 we still felt was definitely an improvement. But the fall-off was very minimal, I think within a mile-an-hour or two from ultimate speed to your slowest, which is kind of similar to what we saw last year when we did the tire test.

“Will they bring something different for this coming 500? It's quite possible. I think they could maybe make a similar change to the right front, maybe make it a little bit more robust. It's hard to tell a lot of times, too, when it's just yourself on a long run as opposed to being in a lot of traffic.”

Given the increased amount of vertical surface area, Power said the aeroscreen-equipped car did seem to be affected by crosswinds a tad more than the screen-less car.

“Actually, yes, I think you do feel gusts of wind a little more,” he said. “We haven't had a terribly gusty day, but I feel like it may have affected the car a bit more. It's very difficult to say, but I just kind of got that feeling a couple times.”

The only area the two drivers disagreed upon was whether it was harder to get in or get out, Dixon saying the former, Power the latter, but each said they would get faster at ingress and egress very rapidly given the number of times it is necessary throughout a race weekend and season.

The next test will be held at Barber Motorsports Park next Tuesday with Simon Pagenaud and Ryan Hunter-Reay driving, while on October 15, Dixon and Josef Newgarden will check out the device at Richmond Raceway. IndyCar has also now announced the fourth test at Sebring Raceway short course, on November 5 with Sebastien Bourdais (Dale Coyne Racing with Vasser-Sullivan) and James Hinchcliffe (Arrow Schmidt Peterson Motorsports).