Will Power and Roger Penske today were awarded miniature replicas of the Borg-Warner Trophy in honor of their conquering the 102nd running of the Indianapolis 500 last Memorial Day Weekend.

The 14-in replicas of the iconic 5ft 4in trophy were presented by Fred Lissalde, BorgWarner president and CEO, at the Automotive News World Congress Dinner in Detroit, part of the North American International Auto Show.

They mark Power’s first Indy 500 win as a driver and Roger Penske’s 17th as a team owner.

Power, who became the first Australian to win the event, started his Penske Dallara-Chevrolet from third on the grid and led 59 of the 200 laps of the 2.5-mile track to beat polesitter Ed Carpenter by 3.1589 seconds and earn $2,525,454. It was Chevy’s 10th Indy win as an engine manufacturer.

Last December, Power unveiled his image on the full-size Borg-Warner at the Indianapolis Motor Speedway Museum and today he received the sterling silver trophy which weighs five pounds and rests on a beveled black marble base. The base is inscribed with the winner’s name, the year of victory, and includes a duplicate of the image affixed to the full-sized Borg-Warner Trophy.

BorgWarner established the Baby Borg in 1988 to provide drivers with a personal keepsake of their victory and ten years later, the company established the BorgWarner team owner’s trophy. Like the driver’s trophy, this is a replica of the Borg-Warner Trophy but features a band of art deco racecars accented in gold to symbolize the importance of teamwork.

Power, who is the 72nd driver to win the Indy 500, told Motorsport.com: “It’s a great honor to get up there and get presented with your Baby Borg with Roger by the president of BorgWarner.

“I tell you, all the functions that are associated with winning the Indy 500 are just fun and enjoyable because it reminds you of the best moment in your career. So yeah, being at a BorgWarner function to get a replica of the coolest trophy in sports is just great.

“I remember seeing so many pics of Takuma Sato [2017 Indy winner] for a long time after he won and thinking, ‘Man, you get so much out of being the 500 winner.’ It’s not just raceday celebration with the milk and the BorgWarner wreath and so on. It continues with the interviews the next day, the pictures on the yard of bricks with all the team and then for months afterward.

“I mean, here we are in January and we’re still celebrating something that happened last May. But that’s how special it is: that Borg-Warner Trophy and having your face on it means you’ve done something that is forever. But this Baby Borg is great because it’s nice to have something to keep as well.”

Asked (facetiously) if the commitments expected of an Indy winner were something he was prepared to go through once more should he triumph at IMS again, he said: “Oh, absolutely. It actually gives you more motivation to win – if that’s possible! – because you realize how great it feels, and all these events for BorgWarner or for your sponsors remind you how significant it is to win the race.”

Roger Penske told Motorsport.com: “You never say you have a favorite win, that would be unfair. But experiencing the resolution to this Indy 500, with Will winning after spending 11 years trying to get it, and seeing the emotion of Will and his wife Liz in the Winner’s Circle was very special. Listening to his comments tonight, he’s realized it’s a life-changing experience to win the Indy 500.

“He’d been close a couple of times before [most notably 2015, when he lost by 0.1046sec to Penske teammate Juan Pablo Montoya], but you never know if it’s going to go your way. But he became a much better oval driver over the years and that gathering of experience really put him at the top of the contenders in 2018.”

Penske, who although born in Shaker Heights, OH., has made Detroit his home and the home of Penske Corporation, was also happy to be receiving his trophy in Motown.

He said: “Because it’s Detroit and I have involvement with the city, with Superbowl [XL] in 2006 and the Belle Isle Grand Prix, to have the opportunity to address the World Congress and then have Will and I receive our Baby Borgs from BorgWarner is a real honor.

“I’m the guy who picks up the award but it’s the people behind me who do all the hard work that are the ones that make the difference. I think that’s what continues to keep us up front and looking forward to 2019 with a strong team. We’re excited to challenge the rest of the grid.”

This May, Team Penske will enter four cars in the 103rd running of the 500, with fulltime IndyCar drivers Power, Josef Newgarden and Simon Pagenaud being joined again by IMSA sportscar ace (and three-time Indy winner) Castroneves. 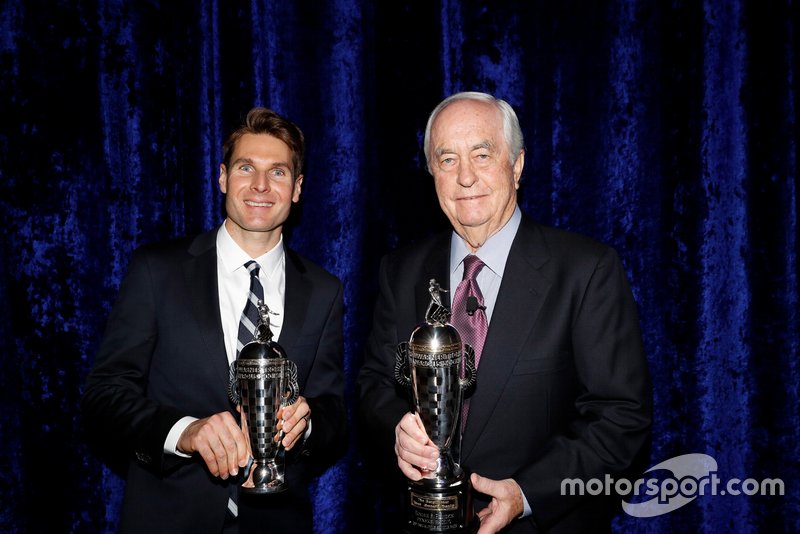 Will Power and Roger Penske with their ‘Baby Borgs', commemorating their triumph in the 102nd running of the Indianapolis 500.

Photo by: Mike Levitt for BorgWarner