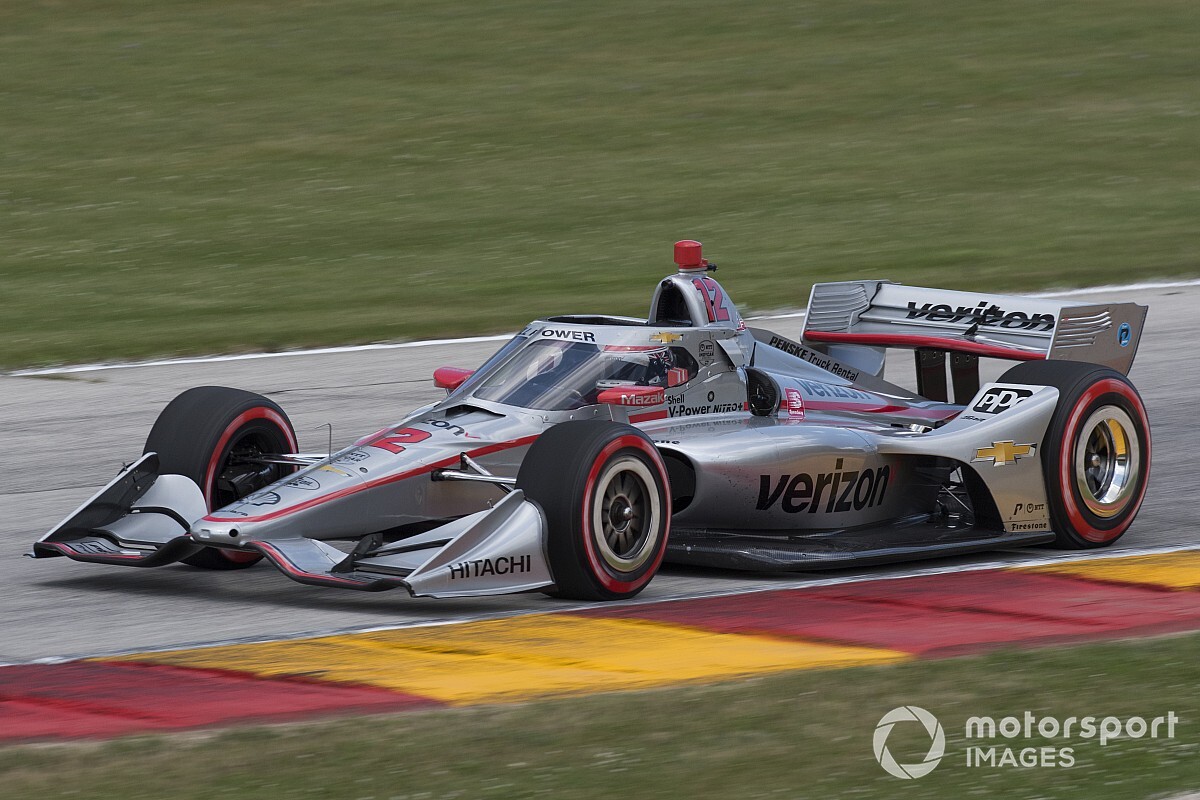 Team Penske-Chevrolet driver Will Power says he feels bad about the collisions in Road America’s second race last weekend that saw both Ryan Hunter-Reay and Graham Rahal out of the race on Lap 1.

Hunter-Reay spun into the Turn 1 sandtrap and tire wall after his Andretti Autosport-Honda’s left-rear wheel made contact with Power’s front wing, pivoting the car to the left and out of control.

At the next right-hand bend, Turn 3, Power dived down the inside of Rahal’s car but understeered into the Rahal Letterman Lanigan-Honda, pushing it onto the outside curb, which it straddled before fish-tailing onto the track again and into the car of eventual race winner Felix Rosenqvist. That impact bounced the RLL machine across the track and into a concrete barrier.

Although Power’s car was unharmed, after being handed a “drop to the back of the field” penalty, at the end of the first green lap he ran off track at Turn 13, spun and needed a bump start. He then headed to the pits to receive a new nose.

The #12 Penske eventually finished 11th after attempting a 'pseudo' two-stop race, having been refilled during the nose-wing change.

Regarding the Hunter-Reay incident, Power, starting eighth, said he planned to follow Scott Dixon’s Chip Ganassi Racing-Honda around the outside of the Andretti driver at Turn 1 but that Hunter-Reay’s move left to accommodate Rahal on the inside of the turn meant he ran out of room.

“Obviously I regret the move now,” he told Motorsport.com. “The thing is, there was a lane available when I started the move, because I was following the same route as Dixon.

“I’ve spoken to Ryan and Graham, and the way I understand it is that Ryan had Graham close to his right-front, Graham moved slightly left – I guess to get a decent line for the corner – so Ryan had to move slightly left so he didn’t get bottled up behind Graham, and obviously my wing was there so that spun him across my nose and into the sand.

“Then at Turn 3 , I would say it’s just your typical first-lap wheel-bang when you’re racing close. I was following Dixon and alongside Graham but obviously when Scott comes across from the left to take the apex, that takes the air off the front of my car so I push wide and we bang wheels.

"It wasn’t a big hit but it was enough to knock Rahal wide and onto the curbs, so when he got on the power that shot him sideways across the track and he hit Rosenqvist which pounded him into the wall on the other side of the track.

“I feel bad that our touch pushed him onto the curbs, but I don’t feel I’m to blame for what happened next, to be honest. You know, if it hadn't been his bad luck that Rosenqvist was there, Graham would probably have recovered fine – might have lost a position or two – but it wouldn’t have been a big deal.

“But I have to say that Graham has always raced me clean and I’ve always tried to race him clean as well, so I feel terrible for him and Ryan both missing out, because I have a lot of respect for them. They’ve been driving really well and they had quick cars, so they deserved better because they’ve also been unlucky.

“Obviously it ruined my race too, but not to the extent of theirs. And actually it's also a shame because they’re two of the nicest drivers out there. Like, I feel bad for them because they're good guys.”

Power’s solo accident at the end of Lap 4 following the restart was a result of getting too close to the car in front.

“I had made up a few positions already,” he said, “and then I got up behind Jack Harvey, and wanted to get a run on him but got aerowash, dropped a wheel off on the exit of Turn 13. It’s the worst run off, really rough, and it launched me and spun me.”

Power says overall that the two-race REV Grand Prix event at Road America was frustrating as he felt he could have won both races, but instead emerged with a single second place.

“Obviously the wrong second gear and the pitstop fumble cost us the win on the Saturday,” he said. “It’s a real shame because we needed to be beating Dixon and instead he beat us. Second day, I think we could have done what Rosenqvist did – it could have been a really solid day.

“So like I say, if I could do it all again, I’d just tuck in behind Hunter-Reay at Turn 1 and think, 'He may not realize there’s another car trying to pass him like Dixon just did.' So maybe when those situations come up, I need to back down and think championship, because you know that there’s the whole race to go, you need to see how things play out.

“Now we’re in a points hole behind Dixon. A lot of work to do to catch up. We need to have good days, he needs to have bad days.

“But yeah, I feel bad about Ryan and Graham because they're in the same situation, as in, they needed points too. I hate the fact that they had their races end on Lap 1 and that I was involved. Ryan is one of those good guys who doesn’t have a malicious bone in his body. Like, can you remember ever seeing him do something deliberate to screw someone over? I can't.

“Yeah, him and Graham are two of the clean racers; you never want to see them lose out like that.”