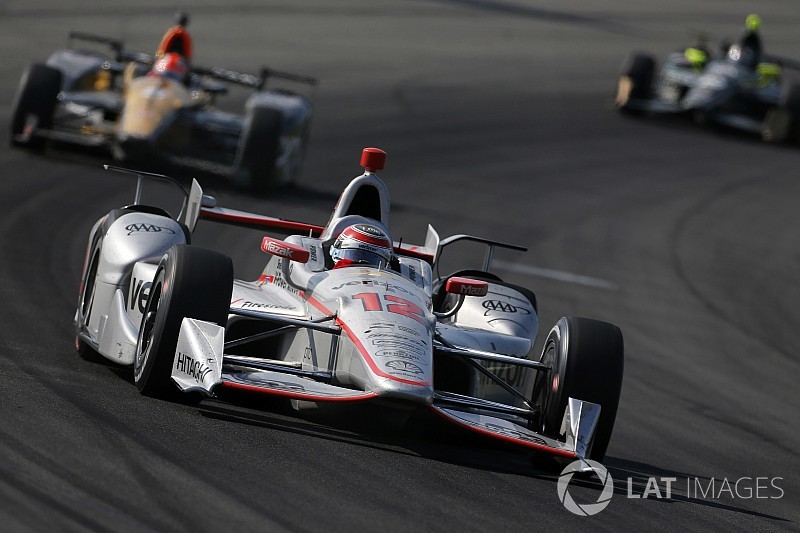 Will Power’s race engineer David Faustino has revealed the Pocono winner’s front-wing failure caused such a loss of downforce that had it occurred in a turn, Power’s race would likely have ended in the wall.

Faustino told Motorsport.com: “It’s a stock Dallara part, and a bearing in there failed and let the front wing drop down flat. Don't know why it failed but there's a lot of air turbulence on the straights, and the turns are very high downforce.

"So it's lucky Will didn’t crash, because if that failure had happened in one of the turns, that’s a push-into-the-wall situation. We got lucky there.

“He came into the pits, we changed the front wing and went a lap down, so we added a bunch of downforce to help his balance a little bit to help him deal with dirty air in the traffic.

“Then we noticed our rear wing was fairly damaged from contact with [Charlie] Kimball, so since we were already at the back we took the opportunity to change the rear wing and keep topping off on fuel so we could run long and get good track position. The way the wing was bent it would have given us extra drag.

“After that the car was fast, we passed a lot of cars and then Will got out into clean air and the car was fast – Will’s laps were 216s[mph], 217s – and we made huge ground on the others who’d stopped several laps earlier.”

Faustino said that Power’s speed differential to his rivals at this stage, rather than the speeds themselves, were crucial to the victory.

“If you look at this race historically, those speeds aren’t necessarily a big deal,” he commented. “We ran those kinds of speeds out front in clean air. It’s just that this year it seems most of the field stacked on a lot of downforce, so you kinda had to do the same but you were in this long line of cars all race.

“Then we scrambled to take out a bunch of downforce in the final stop because Will was running in clean air, but I didn’t want to slow the stop down too much and give up all our track position advantage.

"We did just enough where he was able to hang onto the lead and set 214s, but last year we were on 216s at that stage, so in my opinion, we still had too much drag in the car. So once the guys behind got close enough to catch our draft, they were towing up to Will. So it was close.”

Faustino paid credit to Power’s crew, who not only had to deal with a total of 10 pitstops – compared with seven for teammate and runner-up Josef Newgarden, and six for other victory contenders – but who also had to install a new engine after qualifying, as the previous unit had reached its allotted 2500-mile limit.

“I’ve got to hand it to our guys,” he said. “The engine change after qualifying to barely make the final practice session and then having to do a mid-race front-wing change, mid-race rear-wing change, downforce adjustments all-day long… It’s really gratifying to emerge from a race like that with the win. A great team effort.”

Despite carrying several more laps’-worth of fuel than their rivals, at the end of the penultimate stint, Faustino said team strategist Jon Bauslog brought Power in for his final stop as soon as the pit window opened, to prevent him getting caught out on track by the pits being closed in the event of late caution period.

“The pit penalty here is only 33sec and the lap time here is 41/42sec,” he explained, “so if you stay out and get caught by a yellow, you lose track position. If we’d stayed out to get more laps in and everyone else had stopped and then there’d been a caution, we’d have gone to the back of the line.

“There’s a lot of ovals where it’s good to stay out because you go a lap down when you pit, but not Pocono.”

Rahal predicts a “great show” by IndyCar at repaved Gateway