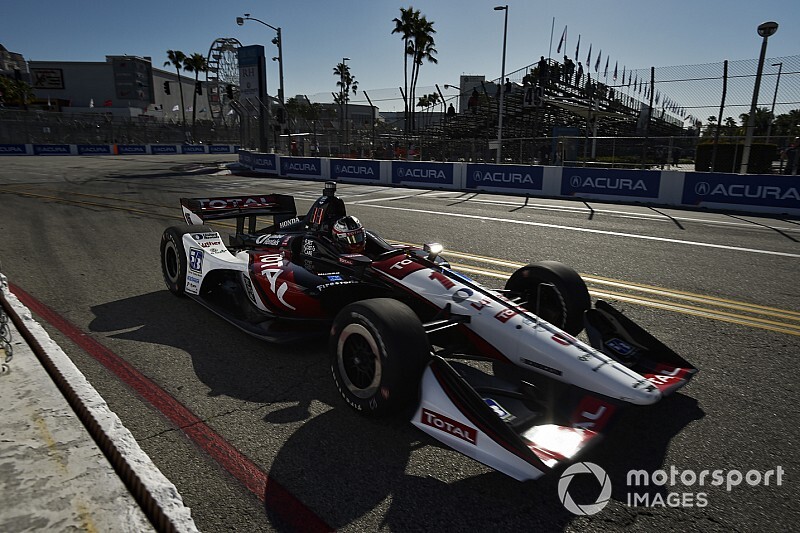 Rahal Letterman Lanigan Racing’s president Piers Phillips believes IndyCar’s race stewards are wrong to have penalized Graham Rahal for blocking Scott Dixon on the last lap of the Grand Prix of Long Beach and that it “sets a precedent” for how they call races in future.

Chip Ganassi Racing's Dixon was applying pressure to Rahal as they started the last lap fighting for third place. Once the RLLR driver used up his last push-to-pass boost along the front straight, he was vulnerable to attack from the reigning champion on the back straight, between Turns 8 and 9.

Rahal, who was struggling with his front tires, locked up his right-front as he slowed for the entry to the right-hand Turn 8, but kept the car under control, and moved to the right as soon as he was onto the back straight. This was to force Dixon to at least go the long way around him into Turn 9.

However, Dixon’s tidier line through Turn 8 had allowed him to gain on Rahal and he moved simultaneously with him to the right-side of the track. Dixon’s better exit speed and push-to-pass boost gave him additional momentum, and the front wing of the Ganassi car made contact with the rear tire of the RLLR machine, which hurt his momentum.

Rahal then moved to the middle of the track down the back straight and held on through the final turns to cross the line in third. However, Race Control – run by Kyle Novak, Max Papis and Arie Luyendyk – considered Rahal’s defensive move a reactionary rather than anticipatory block.

Phillips, who switched from Schmidt Peterson Motorsports to become president of RLLR last winter, told Motorsport.com: “It was defense but he’s entitled to do that. I disagree with the stewards.

“If you look at the on-board, Graham comes out and hits the outside curb, and instantly moves right to defend. In my opinion, it was not in reaction to Dixon’s move.

“But unfortunately myself, Ricardo [Nault, Rahal’s race engineer], Bob [Rahal] have been in to the stewards and said our bit and they’re not overturning their decision. So I suppose we’ll just have to take our medicine and wait for things to turn around the other way.

“But I think they’ve set a precedent now. There’s going to be a lot of people looking at every defensive move and they’ll have to be consistent. It’s disappointing. And what I’m afraid of is that it will intimidate drivers into not racing each other.

“This isn’t supposed to be ‘after you, Claude’. This is racing, and a good defense is as important a tool for a driver to have in his skillset as a good attack. And I thought Graham played it absolutely right. He moved in anticipation of Dixon making a move. He couldn’t have moved to the right any sooner after exiting Turn 8. It just so happened that Scott was choosing to go the same way.

“Graham knew he’d lost a bit of momentum, he knew the threat, so the very least he was going to do was make Scott go the long way around. I don’t understand why [the stewards] called it the way they did.”

Rahal himself said: “I moved right as quick as I could out of the corner and then I gave him a lane. By the rules you’re allowed to make your move, which I did on the exit of the corner. That was it.

“I’m not upset about it. We had a good day. Our car wasn’t great today, but it was decent and the Total Oil team pushed hard. That’s all we can say. Did I block? Yes, I blocked; you’re allowed to block in this series. You’re allowed to make a move; I made a move. That’s allowed.

“I didn’t go back to the left; there’s a lane to the left. He had overtake [push-to-pass boost], I didn’t. If he wanted to go, he could go.

“At the end of the day, [we finished] P4. Do we deserve P3? Probably, but you know what? It was a good day and good points for us. We haven’t had a lot of luck this season, so I’ll just take it as it is and move on."

Bobby Rahal commented: “It’s tough because the definition… What’s a move? What’s this, what’s that? I think it was a bad decision but that’s a personal opinion.

“I think it’s hard because when you put yourself in those kinds of situations, when you’re making judgements, you really put yourself between a rock and a hard place, because what are you gonna do next time? What constitutes [a block]? How do you define it? That’s the problem.

“If you’re doing this [Rahal simulated a driver weaving from side-to-side] then that’s blocking, and if Dixon was right there and Graham was squeezing him towards the fence then I would agree totally [with the penalty]. But it wasn’t that way, and now it puts everyone in a tenuous place.

“We need a definition [of a block], because until they really know what that is, it’s going to go on.”