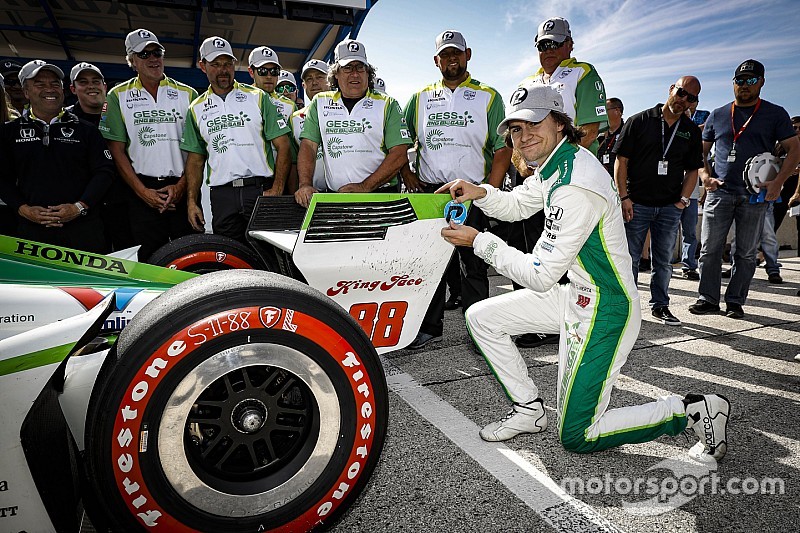 The Harding Steinbrenner Racing-Honda driver, 19 years and 83 days old, lapped the 4.014-mile course in 1min42.9920sec, edging Andretti Autosport-Honda’s Alexander Rossi by 0.1773sec. Herta chose to run two hot laps on one set of tires in the Firestone Fast Six shootout, whereas his closest opponents, Rossi and Team Penske-Chevrolet’s Will Power, took on two used sets in the course of the eight-minute session, running one hot lap on each.

Chevrolet, which has appeared somewhat outgunned this weekend, will nonetheless fill out Row 2, as Power will be joined by teammate and championship leader Josef Newgarden, who was 0.6sec off Herta’s fastest.

The Rahal Letterman Lanigan Racing-Honda team made an excellent comeback from its struggles in practice, with Graham Rahal and Takuma Sato locking out Row 3.

Sebastien Bourdais’ Dale Coyne Racing with Vasser-Sullivan Honda will start seventh after not quite being in the hunt so far this weekend, and he will line up beside Spencer Pigot’s Ed Carpenter Racing-Chevy.

James Hinchcliffe qualified ninth in the #5 Arrow Schmidt Peterson Motorsports-Honda, edging Marco Andretti by just 0.0131sec who was a tenth quicker than Ed Jones in the second ECR car.

Chip Ganassi Racing’s Scott Dixon was fast enough to make it through Q1 Group 1 but from Turn 12 on his final lap his car was trailing smoke and he pitted with an apparently expired Honda, so was left unable to compete in Q2. Ganassi’s misery was doubled by rookie Felix Rosenqvist failing to progress from Q1 Group 2.

Andretti Autosport’s Ryan Hunter-Reay was the most surprising elimination in Q1, because he had been fast in practice, but he got caught up behind Bourdais on an out lap, and then had a very loose moment through Turn 3 on his next attempt at a flyer.

Penske’s latest Indy 500 winner Simon Pagenaud lost time on what should have been his best lap when he ran wide at Turn 7, and he failed to advance from Q1 by 0.03sec, and will line up 16th.

Santino Ferrucci was eliminated in Q1 when his car slowed as he came up the pit straight and he came to a halt at pit exit, but pulled off and onto the grass.