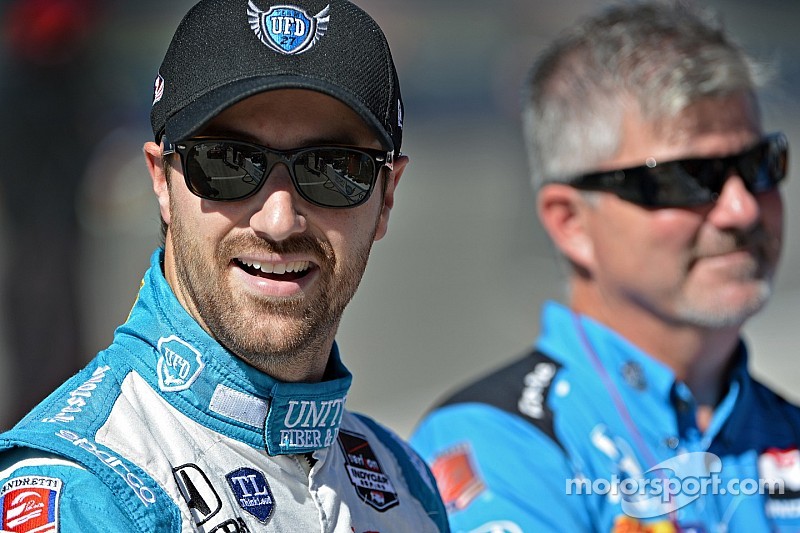 Long night for the Honda-powered drivers.

The Andretti Autosport team had high hopes for the IndyCar season finale at California Speedway, but luck wasn't on their side. Here's what the drivers said:

James Hinchcliffe (in photo), United Fiber & Data Honda, qualified 11th, but rolled off from the 10th position for tonight's 500-miles under the lights of Auto Club Speedway and ended up in fifth:

"Roller coaster race. Obviously the car was bad-fast early and we were able to drive up to the front. We probably stayed out a little bit too long on that stint and lost a little track position. Then we got the drive through and it just kind of stacked against us, but luckily we were able to stay on the lead lap and got the yellow we needed to battle back a bit. The UFD car was good on long runs, and luckily we had a lot of that today and had the yellow when we needed it. George (Klotz, strategist) made a great call on pulling us in early on that last stop and we were able to leap-from some guys. We didn't have anything for the top four to be honest, but to come back after the penalty with a top five, we're pretty pleased with that. Our thoughts are still with Mikhail (Aleshin), we missed him out there tonight and wish him a speedy recovery, and big thanks to all the fans for a season full of support."

Carlos Muñoz, Cinsay Honda , started 18th and came away with a top-10 finish in P8 for tonight's season finale in Southern California. The Colombian captured 2014 IndyCar Rookie of the Year honors, and the Miami resident finished his season with three podium, five top-five and eight top-10 finishes with a best starting position of third (Pocono): "With how we started the weekend...  you know, we started nowhere, and we finished P8 and with a good pace. I had one problem in one of my stints; I had to stop in the middle of the stint, so that cost us a lot of positions. Anyways, I'm really happy with the car, with the finish, a top 10 in the championship (unofficial). As I said before, I was really worried coming into the race because we were nowhere, and then suddenly during the race, the Cinsay car was perfect for me. I felt the grip, finally, during the race; when you have a good car, when you feel strong, you move up."

Marco Andretti, Snapple Honda, surpassed 150 career starts, ran as high as second place and recorded an 11th-place finish: "That was hard-fought. We kind of struggled across the board. We really just didn't put it together tonight, it was just a hang in there 500 miles but it felt like the Baja 1000, for sure. When you look at the season, not the numbers we were hoping for but we'll come back fighting. Thanks to my Snapple family and all my LA friends for coming out and cheering us on tonight and best wishes to Mikhail (Aleshin, who crashed in practice), get well soon, man."

Ryan Hunter-Reay, DHL Honda, started from the eighth position and battled his way up, taking the lead on Lap 103, but battling for second place on Lap 175, the 28 machine spun and stalled in the infield resulting in the only full-course yellow of the night and leaving the American a lap down in 16th position: "Disappointing night. I was pushing really hard on old tires under Tony Kanaan for second and the car just came around on me - just snapped completely and we went a lap down (after spinning off into the grass). I thought I had some suspension issues on the rear, which ended up just being flat-spotted tires from the spin. We never got our lap back, so that's where we wound up. It's unfortunate because the DHL car was good tonight... Another one got away. Was hoping to end the season on a higher note but, nonetheless, I have to thank all the fans for the support this season as well as everyone at DHL and Honda. We'll come back stronger."