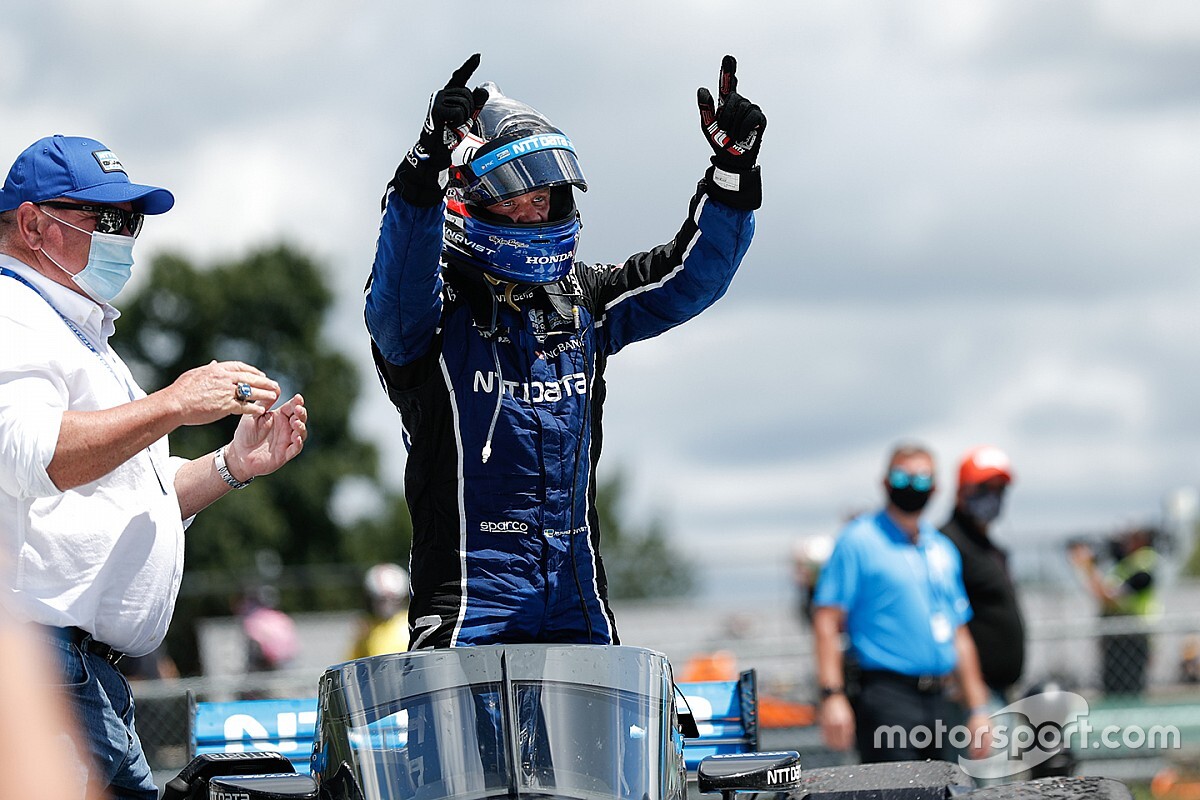 Chip Ganassi Racing's Felix Rosenqvist’s relentless hunt down of Patricio O’Ward paid off on the penultimate lap of the second race in the REV Group Grand Prix at Road America, snatching the lead and going on to score his first NTT IndyCar Series victory.

The Arrow McLaren SP-Chevrolet of O’Ward made a strong start from pole, holding off the Andretti Harding Steinbrenner Racing-Honda of Colton Herta, followed by the Dale Coyne Racing with Team Goh car of Alex Palou.

But behind them, Ryan Hunter-Reay braked a little earlier than Scott Dixon’s Chip Ganassi Racing-Honda and Will Power’s Team Penske-Chevrolet, the latter of which clipped the Andretti car’s left rear, firing the #28 into the Turn 1 tire wall. Santino Ferrucci spun Jack Harvey’s Meyer Shank Racing-Honda down to the tail of the field, while near the back, Conor Daly ran into the back of Oliver Askew and broke his front wing.

On the exit of Turn 3, Power and Rahal banged wheels as the Penske driver dived down the inside, which put the RLL car up on the curbs. Rahal’s car would have survived that impact but Rosenqvist also dived down the inside in the second Chip Ganassi Racing-Honda, pitching the RLL machine off the track and into the end of a wall.

Power was penalized for the Hunter-Reay collision and was made to restart at the back of the field with Ferrucci and Daly, who’d also been penalized for impacts. O’Ward took that green flag at the start of Lap 5, ahead of Herta, Palou, Dixon and Rosenqvist. In sixth was a man who had sidestepped all the first lap chaos, rookie Rinus VeeKay in the #21 Ed Carpenter Racing-Chevy, ahead of the top primary-tired car, Alexander Rossi of Andretti Autosport.

But at the end of that lap, there was another yellow, as Power flew off the track at Turn 13, broke his front wing on an advertising hoarding, stalled, got a bump start and headed for the pits. Thanks to the length of the Road America course, he was still on the lead lap.

At the second restart, Palou got the jump on Herta, got the draft from leader O’Ward and moved into second place at Turn 1.

Palou remained 1.1-seconds behind O’Ward for the next five laps, and the pair edged away from Herta who had Dixon, Rosenqvist, VeeKay in close attendance. Rossi retained seventh place, 1.4sec back, but if his pace on primaries was respectable, Newgarden also running the harder Firestones was struggling, losing spots to Charlie Kimball and Marco Andretti.

Newgarden ducked into the pits on Lap 11. Herta and Dixon did the same next time by, along with Andretti and Pagenaud. Dixon’s right-rear tire change was slow and so he couldn’t beat Herta out of the pitlane.

Palou stopped next time by and emerged well ahead of Herta, while Rossi had a strong stop but on cold tires – now reds – he couldn’t stave off Dixon.

O’Ward left his stop until Lap 15, and emerged still ahead of Palou. Rosenqvist and the third Ganassi car of Ericsson went until Lap 17 and both emerged ahead of Dixon, although Ericsson on cold tires had to give up his spot to Dixon and Rossi. A lap later, Rossi outbraked Dixon into Turn 5.

Thanks to Lap 6 stops, Power and Ferrucci were able to delay their next stop and ran out front, although O’Ward demoted Ferrucci to third on Lap 19 and Power on Lap 20. He was now seven seconds ahead of his ‘real’ pursuer, Palou, who in turn was 3.5sec ahead of Rosenqvist. Not for long, however – on Lap 22, Rosenqvist passed Palou into Turn 1. Palou would soon have to be looking in his mirrors, for Rossi’s charge continued, past Herta and he was now only 2.3sec behind the DCR car.

Power finally stopped for primaries at the start of Lap 23, leaving O’Ward leading Rosenqvist by seven seconds, Palou dropping into the clutches of Rossi who was now four seconds ahead of Herta.

Dixon was struggling to keep his rear tires under him, dropping a place to teammate Ericsson before peeling into the pits. Ericsson, kept charging and was soon on Herta’s tail. Colton in fact had to give up positions to not only Ericsson but also Takuma Sato in the RLL-Honda.

Rosenqvist was still charging hard and had his deficit to O’Ward down to 4.3sec before the Arrow McLaren SP driver pitted. The Ganassi driver (and teammate Ericsson) stopped next time by, but Rosenqvist’s car was dropped before the left-front tire changer had finished, and he had to be lifted again.

That allowed O’Ward back in front without issue, leading by eight seconds, with Rossi now third, but four seconds back and ahead of the recovering Ferrucci, Herta who had passed Dixon and the off-strategy Power.

Dixon was still struggling for pace, and had to allow teammate Ericsson past to tackle Power who was clearly trying to stretch his stint so he’d make just one more stop.

Rosenqvist was hunting down O’Ward, sometimes half a second a lap faster, and the gap came down to 5.8sec with 20 laps of the 55-lap race to go. Herta and Ericsson got past Ferrucci on Laps 36 and 37 respectively, but the pair were now 10sec behind third-placed Rossi. Power had given up four places to Newgarden, Sato, Palou and Kimball as he continued trying to eke out his fuel. Palou’s car had never felt good since his first pitstop and worse after his second, and he was going to be lucky to take home a Top 10 finish.

Ferrucci and Power stopped on Lap 39, the latter having run 18 laps on his previous tank of fuel. Almost simultaneously, Ericsson passed Herta for fourth around the outside of Turn 5, prompting Colton to head to the pits.

Dixon’s poor race continued when he stopped on Lap 40 and stalled, although the Ganassi team were quick to refire him, and he stumbled away.

Lap 41 was when O’Ward pulled in with his lead now under four seconds, Rosenqvist and Ericsson going one lap longer. This time Rosenqvist got away cleanly, but he hadn’t enjoyed a strong in-lap and emerged five seconds behind O’Ward who was on alternate compound tires. The gap stretched to 6.2sec as the Ganassi driver tried to get his tires up to temperature. Next time by, however, Rosenqvist was clearly on a mission and trimmed the gap to 5.6sec with 10 laps to go.

With six to go, the gap was 3.8sec; with four to go it was two seconds, and O’Ward let the late-stopping and feisty Daly to unlap himself. That allowed Rosenqvist to draw still closer and the tension was further heightened for O’Ward as he was needing to follow a fuel number, having made his final pitstop one lap before the Ganassi driver, and nurse his red tires.

After the McLaren driver ran wide a couple of times, Rosenqvist was on him, and on the penultimate lap during the run down to Turn 5, O’Ward had to stick to the inside to defend. Rosenqvist allowed him to do so but ducked back behind him got on the gas earlier and had the momentum to take the inside line up the hill to Turn 6.

O’Ward bravely tried to stay alongside but finally conceded the lead to the Swedish sophomore who went on to win by 2.8699sec. Finally Dixon’s winning run has come to an end, but Ganassi’s has not.

Ross came home third for his first podium of the year, 5.7sec behind O’Ward and the same distance ahead of Ericssson, while Herta was a distant fifth ahead of Ferrucci, Palou, Sato, Newgarden, Kimball, Power and Dixon.