Felix Rosenqvist says his Chip Ganassi Racing team trusted him not to take out teammate Scott Dixon as the pair fought for victory in the closing stages of the Honda Indy 200 at Mid-Ohio.

The Swedish rookie came within less than a tenth of a second of his first career NTT IndyCar Series victory on Sunday, taking advantage of his three-stop strategy to close down the 10-second lead that two-stopping Dixon had enjoyed with 20 laps to go.

Rosenqvist almost managed to pull off a pass on Dixon at Turn 2 on the final lap, but Dixon rebuffed his teammate and was just able to hang on for a sixth Mid-Ohio victory on his badly worn red tires.

After scoring the first podium finish of an up-and-down rookie IndyCar campaign, Rosenqvist said his crew had not instructed him to back off in the closing stages - and praised team owner Chip Ganassi for allowing he and Dixon to fight it out among themselves.

Rosenqvist said: "It's always a trade-off. If you play it too safe, you're never going to win the race, and if the team tells you to go for it, you go for it. That's also an instruction.

"The instruction was not to take it easy and not pass Scott. They said, 'try to get him, but think about he's your teammate'. You know, it's kind of a mixed call.

Rosenqvist believes he could have found a way by Dixon with just one more lap - and also hinted that lapped traffic played a part in his defeat.

"If it was someone else, obviously you would have gone a bit harder," he admitted. "But being Scott, you know he's going to fight you fair. I think he's always on the right level of aggression and safety at the same time.

"And I really enjoy, every time I fight against him, it's actually impressive how clever he is, not only when it comes to his speed but also the way he races, and when you race side by side, he rarely takes the wrong decision, and you could see that today.

"I'm sure we would have got him with another lap, but the race is what it is. The lapped cars is what it is, and he won the race, so credit to him, and maybe next time we get him."

While admitting that battling Dixon was akin to "playing with fire", Rosenqvist said the fact it was his teammate ahead of him did nothing to dampen his aggression at the end of the race.

"Chip's first rule is always don't take out your teammate or we're going to have a serious discussion," he added. "He always says that before the race, and that's going to stick in your head for sure when you're catching up to Scott.

"As I said before, I trust him to give the room when it's needed and to be aggressive when it's needed, and I didn't really feel worried about it. I mean, when my team trusts me to go for it, I trust them that that's the right call and I do what I'm told, go for it, have fun." 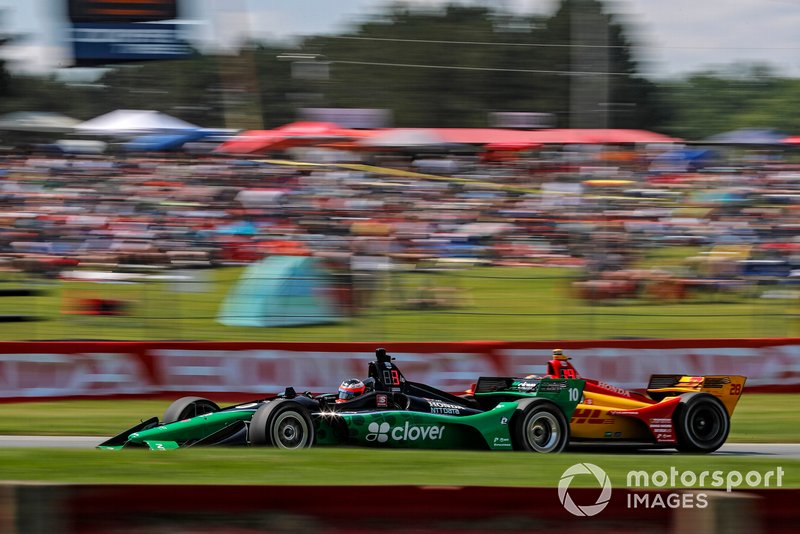