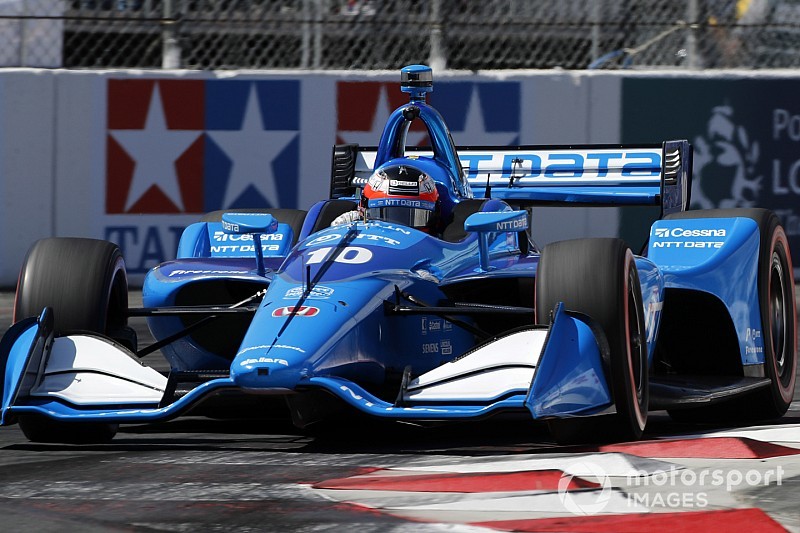 Chip Ganassi Racing’s Felix Rosenqvist was left annoyed at his mistake in qualifying, but still emerged from the Acura Grand Prix of Long Beach with top rookie honors as his principal rivals all hit trouble.

Rosenqvist had the pace to contend for a top-four slot on the grid during qualifying, setting the second fastest lap of the weekend thus far during Q2, which would have easily seen him graduate to the Firestone Fast Six.

However, a bump at the end of the back straight caused him to lose braking force and he slid straight on and tagged the tire barriers in the escape road. The subsequent red flag meant his two fastest times were deleted, and he was consigned to 12th on the grid.

“It was a classic driver mistake,” said Rosenqvist. “It probably looked a bit silly from the outside since I’d already set a time good enough to advance, but I know how quickly things can change in street track qualifying. The grip improves throughout and you need to push the entire way to make sure you’re not leapfrogged. Also, the instruction from the team was to keep pushing on for another lap.

“Hindsight is a wonderful thing and we now know it wasn’t necessary, but there and then I think it was the right decision.”

His race was therefore compromised and he came home an unspectacular 10th, having been passed by one of the Arrow Schmidt Peterson cars, that of James Hinchcliffe, but then getting held up by the other, the lapped Marcus Ericsson.

“We were searching for opportunities to improve, but it never really happened,” said Rosenqvist. “I think our race was lost after the first pit stop, when we needed some clear air but got stuck behind Ericsson. In IndyCar, you're racing even if you're a lap down and that was probably his instructions, but we lost a lot of lap time behind him.

“With that, we lost Hinchcliffe as well. After that, it was sort of just following the others and trying to make a difference. The top 10 was evenly matched today so it was not easy, but we know we have the pace and we’ll keep working hard on the NTT DATA car going forwards.”

Herta joined Carlin Racing’s Patricio O’Ward on the fifth row of the grid at Long Beach, and passed him with a brave maneuver into the Fountain turn, Turn 3, but in the second half of the race he struck the wall at Turn 9 and the damage was enough to end his race. Thus for the second successive event, Herta was first retirement (at Barber Motorsports Park he suffered a mechanical failure).

O’Ward suffered a seemingly inexplicable struggle on his first set of reds, that caused him to tumble from ninth to 16th in the space of two laps in the opening stint.

Another rookie, Santino Ferrucci of Dale Coyne Racing, finished 21st and two laps down after skidding down the Turn 1 escape road, and Arrow Schmidt Peterson driver Marcus Ericsson shunted into Jack Harvey on the opening lap, received a drive-through, and finished 20th.