Felix Rosenqvist, who finished fourth in his first ever NTT IndyCar Series event, has revealed that in the second half of the St. Petersburg race he had a trapped nerve that forced him to drive one-handed. 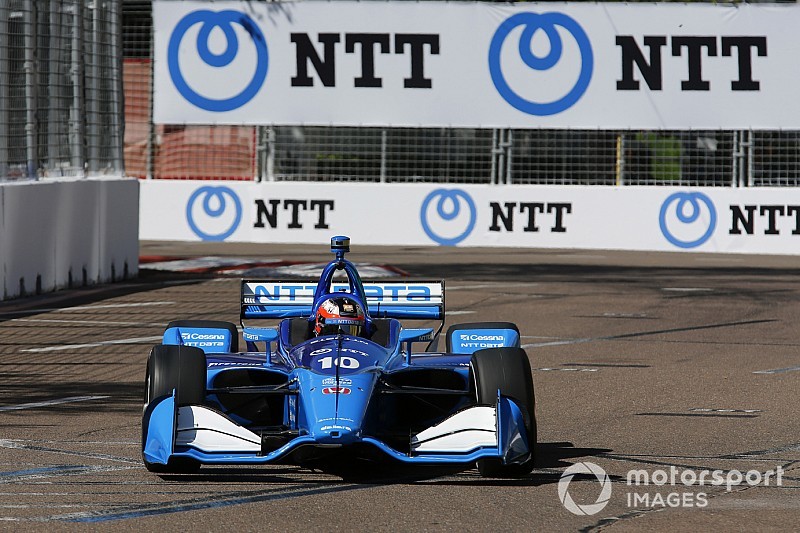 The Chip Ganassi Racing-Honda driver jumped into second place at the start by passing eventual winner, Team Penske-Chevrolet’s Josef Newgarden into Turn 1, and then on a restart he outbraked another Penske, that of polesitter Will Power, at the same spot.

The rookie went on to lead 31 laps but eventually a slow departure from a pitstop saw him demoted by Power in a close call at pit exit, and the pair of them were jumped by Newgarden and Rosenqvist’s teammate Scott Dixon, but Rosenqvist also revealed he had been physically compromised in the second half of the race.

"This was the toughest race I've ever done," Rosenqvist said. "I'm knackered. Driving like this for over two hours between the walls, with every second counting and with no power steering is a real physical and mental challenge.

“To add to that, I trapped a nerve in my right arm and had to drive the last 40 laps basically with just one arm.

“I'm glad I've stepped up my training this winter and I'm proud to have achieved what I did today. We've got a great platform to build on for the rest of the season."

Rosenqvist told Motorsport.com that his pass on Power to take the lead was a planned maneuver but that the inside line into Turn 1 had been slippery.

“There was a massive amount of rubber marbles on the straight off-line, even after five laps,” he commented. “But as I got the run on Power and pulled out, I heard my tires picking up more and more rubber and as I went on the brakes it wasn’t stopping.

“But it was still calculated because I started braking really early, but I guess it looked really dramatic because I locked my front wheels. It didn’t flatspot them – the lock up just cleaned all the marble shit off the tires!

“So that was good. From there on, it was pretty nice but then it flattened out. I lost a little bit in the pitstops – pit-out, mainly. At the first stop I couldn’t get it into gear, and then on the second stop I came out and went side by side with Power. I thought maybe he could have given me more room, but I honestly don’t know what the rules are there. No problem.”

Rosenqvist said that one of IndyCar’s prime requirements in a race with few yellows – fuel-saving while going fast – relatively easy, even on his debut.

“Yeah, I saved quite a lot. You don’t really lose much time, so if you can, you should always do it because it saves the tires a bit as well. So if there’s a safety car, your tires are in a better condition for the restart.

“So I’m reasonably satisfied and pleased. I suppose a little bit disappointed to not be on the podium but you can’t win them all. We’re here to learn and score good points every race and that’s what we did and we showed we mean business.

“I’m humbled by how good these guys are, especially Scott and Will, and racing against these guys you always learn something. It’s good – they keep pushing you forward.”

Rosenqvist will be a threat, say established IndyCar aces

Dixon, Power and Newgarden were unstinting in their praise of Rosenqvist throughout the weekend, although none of them expressed surprise at his pace given his achievements in other series.

Teammate Dixon commented: “The guy has got a ton of experience in so many different cars, so it's been really refreshing, actually, to not be in the same ecosystem and thinking of the same things. He’s kind of thinking outside the box.

“He's a strong guy, very committed and obviously very talented and he's going to be a hell of a fight for the whole year, and it's nice to be working with somebody really close on the speed side.”

“He did a great job all weekend to qualify the way he did and to race the way he did,” said Power. “Very strong in the race, as you would expect. I couldn't see anything [he did wrong]. He's a rookie, but he's obviously going to be really strong.”

“We want to see the greatest talent in the world running with us and I think you have one of the best in him. Yeah, it's going to be tough to beat him.

“I thought he was just about right. He wasn't overzealous, wasn't too aggressive and wasn't too timid.