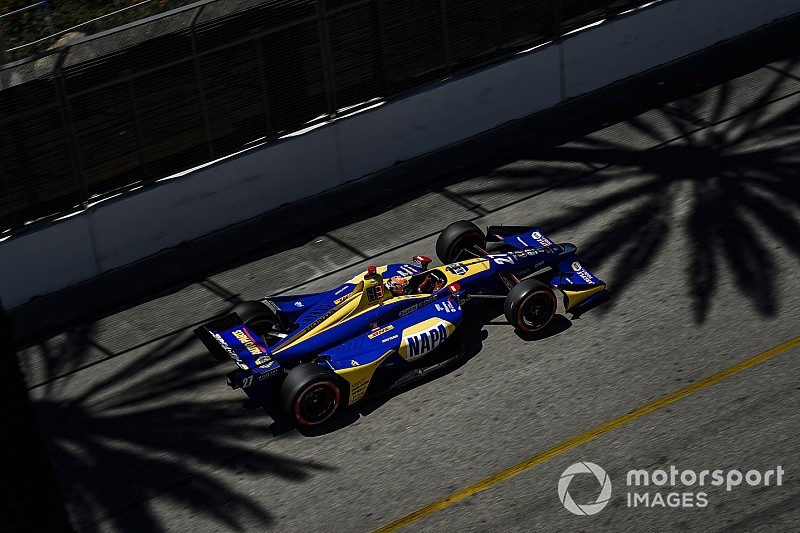 Andretti Autosport’s Alexander Rossi has dedicated his triumph in the 45th Acura Grand Prix of Long Beach to his grandfather, whose death he only learned of today.

The 2016 Indy 500 winner, who dominated last year’s GP of Long Beach, was even more dominant on this occasion, again starting from pole and leading 80 of the 85 laps.

It was the sixth IndyCar career win for the 2018 championship runner-up, and moves him up to second in the championship, 28 points behind Team Penske-Chevrolet’s Josef Newgarden.

On TV afterward, Rossi dedicated the victory to his grandfather, Donald Russell, and explained: “I got an email from a cousin of mine this morning. That was kind of shocking news.

“He was getting old, so it wasn't a huge surprise. But he was someone that I looked up to a lot.

“We had a thing called the Straight Arrow Club which he taught me as a young kid – not do anything stupid, keep the arrow straight. I think I'm the president of that club since he's moved off.”

Aside from that, Rossi admitted he had little trouble during the race, able to pull away from closest pursuer Scott Dixon in the opening stint and then doing the same to Newgarden for the remainder of the event. He eventually won by 20.2359sec – the largest victory margin at Long Beach since Al Unser Jr.’s sixth and final triumph here 24 years ago.

Team CEO and Rossi’s strategist, Rob Edwards, radioed to him mid-race that he had a slightly overheating right-front brake, but the driver said it wasn’t a problem.

“I'm glad there was an answer instead of just me wondering what was different,” he said. “When I knew it was a brake temp thing, you just back off the braking zone, find lap time a little bit differently. That's what we did. Conserved it.

“I mean, the street courses are always demanding on brake temperature. It's something we all have to deal with, managing that throughout the day. But I was talking to some of the other guys after the race, I think the track just got greasy. It was more than just a right front thing. I think everybody struggled on the last stint with the temps going up.”

Asked if he was worried, Rossi replied: “Oh, no. The gap kept getting bigger, so it was fine.”

Fending off Dixon at the start and first restart, as well as nailing his out laps were, said Rossi, the crucial moments that helped seal the victory.

He said: “You always have some moments that are critical, right? The start and the restart – Scott was alongside me both times. We had to make sure we executed that, were able to get him on the brakes, which we did.

“The out laps are always very tricky. You're with other cars. You want to make sure you keep your track position, but obviously don't make a mistake. Those are hard.

“There was one car, Marcus [Ericsson], I struggled to get by. He was a lap down. Took us a while to get by him. That was challenging, as well. But minimal things. It was a pretty smooth day out there other than that…

“But… you still have to go quick, right? There are a bunch of really fast guys behind you so you can't relax at all.”

Rossi’s win also marked Andretti Autosport’s 200th victory across all series, and team owner and CEO Michael Andretti described the statistic as an exciting one.

“I'm so proud of what we've been able to accomplish in I think a short period of time, to get to 200. We've had so many great people help get us there. I was just told we had 38 different drivers that won for us over the years to get us to this point.

“It's a great feeling. I'm just so happy for the whole team because they've earned it. To do it here in Long Beach even makes it that much more special because Long Beach has always been a special place for all of us, the Andretti family. For me, I [scored] my very first [IndyCar win] here and my very last [win] here.”

Andretti, who is fourth in IndyCar’s all-time winners list with 42 to his name, also paid tribute to Rossi.

“He drove flawlessly all weekend,” he commented. “That lap he did in qualifying I think was the difference, as well. To be able to start on pole here is a big advantage. He just put together a great lap there in the end. That was really the big difference.

“I was hoping to win races before we got here, but really glad that we've finally been able to break the ice and get it done. We've had competitive cars in all the races, but it seems like we've always had something go wrong for us. Everything went perfect today, which helps make up for that.”

He continued: “I think [Rossi] is a great driver. I think from the moment he sat in one of our cars, we knew we had someone special here. He's been great to have as a part of the team. He spends a lot of time at the race shop. He's become a part of this team and a part of – we call it a family.

“It's been great. I hope he can be here for many, many years.”