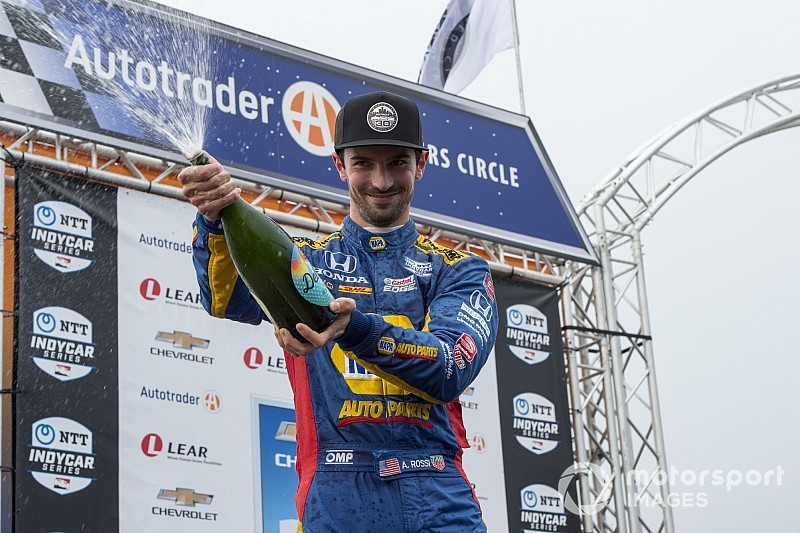 Alexander Rossi has signed a new deal with Andretti Autosport, after months of speculation that he might sign elsewhere, while Michael Andretti has also confirmed that his team will remain Honda-powered.

Rossi, who won the 2016 Indianapolis 500 in his debut season of IndyCar racing, scored his next win at Watkins Glen in 2017, and the momentum carried him into a title fight with Chip Ganassi Racing-Honda’s Scott Dixon last season.

This year he lies second in the championship, locked in a title battle with Penske-Chevrolet’s Josef Newgarden and this year’s Indy 500 winner, also Penske, Simon Pagenaud.

Rossi had been linked to a possible move to Penske, despite his strong Honda connections, while Sam Schmidt – co-owner of Arrow Schmidt Peterson Motorsports – confessed to Motorsport.com that he was very interested in hiring the 27-year-old but that he expected Rossi to remain with Michael’s team.

NAPA Auto Parts appears set to remain as primary sponsor – one of the keys to Rossi and Andretti remaining partners – with AutoNation also staying put.

Said Andretti: "We’ve been working hard on this, and I’m happy to see everything come together. Since 2016, we’ve built a strong relationship with NAPA Auto Parts – they’re such a natural fit for the series, Alexander and for the team and we’re pleased to be able to continue working with them into 2020 and beyond.

"We first met AutoNation through Ryan Hunter-Reay – and we can’t thank Ryan enough for his support and efforts in helping the continued growth of that relationship. It’s been exciting to see AutoNation grow within the sport, and to see them now welcome Alexander to their family is just great.”

Rossi himself stated: "It feels good to continue with Andretti Autosport. Over the past four years, we’ve built a very strong team with great chemistry and I believe that we have the tools necessary to win races and championships. I’m looking forward to not just calling this my team, but my home in the IndyCar Series. Michael [Andretti], J-F [Thormann], Doug [Bresnahan] and the entire team have been working very hard to put all the pieces of this deal together and it’s definitely a relief to have the future settled and be able to focus on the championship fight ahead of us.

“It’s fantastic to have NAPA AUTO PARTS, AutoNation and Honda supporting the 27 program. I’ve had the pleasure of developing a great relationship with both NAPA and Honda and couldn’t imagine not having them in my corner. AutoNation has always had a strong partnership with the team through Ryan [Hunter-Reay] and I’m looking forward to the opportunity to represent the Drive Pink campaign and getting to know the AutoNation team better.”

Andretti Autosport, which started the current 2.2-liter V6 twin-turbo engine regs in 2012 with Chevrolet, and won the 2012 championship with Ryan Hunter-Reay – the team’s last drivers’ title – has run Honda Performance Development units ever since.

“We have a longstanding relationship of success with Honda and we’re happy to continue to build accolades together” continued Andretti. “All five of our Indy 500 wins have come under Honda power, and I’m looking forward to working with the entire HPD team to add to that count.”

“At HPD, our first goal every season is winning the Indianapolis 500, and Andretti Autosport has won more ‘500s’ for Honda than any other team. That said, HPD is fortunate to work with multiple high-caliber racing organizations. This commitment from Andretti Autosport strengthens our entire effort, as we move into the next era of Indy car competition.”