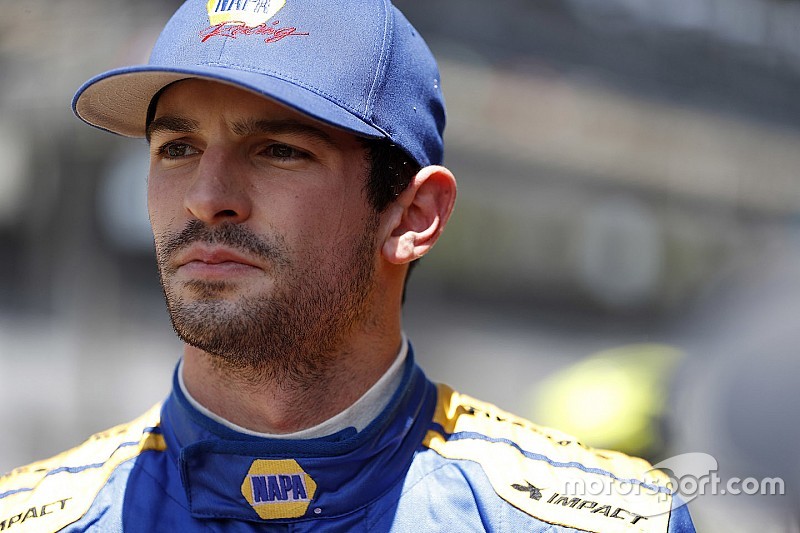 Alexander Rossi says a setup gamble probably cost him a chance of a top-five finish in yesterday’s IndyCar Grand Prix on the IMS road course.

The Andretti-Herta Autosport driver started ninth an finished eighth but ran as high as fifth in the early stages, ahead of teammate Ryan Hunter-Reay and Team Penske’s Simon Pagenaud, who eventually finished third and fourth respectively.

He told Motorsport.com: “I feel we chose the wrong downforce setting – we didn’t have enough, which penalized us in terms of tire degradation on the first stint.

“I mean, we pitted at the same time as everyone else but the gap to the leader got pretty big so then it was just recovery from that, in every stint.

“Although the aerokit is the same as last year, the tires are very, very different. There was a second-and-a-half difference between reds and blacks, so we came here with the same approach as last year but that quickly went out the window.

“I can’t complain too much because everyone had the same thing to deal with, but we took a gamble and it didn’t pay off.”

Asked why a gamble was necessary when he had qualified in the top 10, he replied: “Because there were five Chevrolets ahead who were going to be pretty hard to beat if we didn’t take a gamble! We could either go conservative and pretty much guarantee ourselves eighth, or we could try something more ambitious and hope it got us in the top five. Unfortunately that backfired.

“If we had been on par with the Chevys, I don’t think we’d have done it, but because there was such a margin, we felt we had to go for it. By the end of the stint, we’d got it dialed in nicely, but we ran out of laps to make up for the earlier issue.”

Chevrolet’s advantage was noticeable from the cockpit

Rossi said that the Honda aerokit’s drag issues compared with the Chevrolet was noticeable from within the car, not just on the timesheets, and it could be felt from the beginning of the two long straights on the Indianapolis Motor Speeway’s roadcourse.

“Oh yeah, you feel it immediately,” he explained. “Our initial acceleration is similar, but as you go through the gears, they pull away.

“But even as you’re turning going onto the straight, you feel it. Think about it; as you turn in, there’s load in the car and if you’re more efficient, there’s not going to be as much speed being taken out. And that’s quite a big corner coming onto the front straight.

“So we’re not down on performance; the Honda engine is good. But the steering-wheel is effectively a brake, so if, as you’re turning, your airflow is less efficient, you scrub more speed, and that’s where they had a margin over us.”

Rossi said Honda’s superspeedway performance was his sole focus now, as he turns his attention to defending his Indianapolis 500 crown.

“We’ll be strong again,” he said. “Honda have got their act together on the big ovals. So now I’m just hoping for a Groundhog Day experience in the 500…”

Alonso on the Indy 500: "I’m going to enjoy it massively"