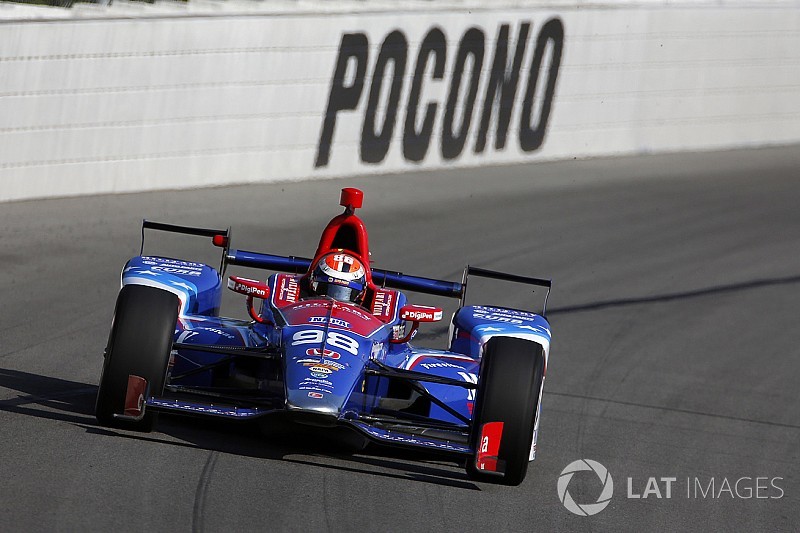 Alexander Rossi led 44 of the 200-lap ABC Supply 500, but doesn’t believe that losing his ability to switch to full-rich mode cost him his second 500-mile win.

The Andretti Autosport-Honda driver, who qualified sixth, fought at the front all day, and finished third, just 0.2sec behind Newgarden and a further half-second adrift of winner Will Power. Afterward, Rossi revealed that his fuel mixture knob came off while a long way from its richest setting, which explained why he suffered on restarts.

“A lot went right for us today,” he remarked. :I think the Military to Motorsports car was strong from the off, got right to the front from the beginning, which was positive, and really it was our race to control at that point from a fuel standpoint, and our crew did a good job in the pits all day, so that was another plus for us.

“The difficult thing was our fuel trim knob came off part of the way through, so we were stuck on our mixture, and it certainly wasn't optimum. It made restarts challenging, and also at the end when the two guys in front of me were pushing quite hard. We didn't have all of our full-on power, which is usually quite strong around here. It was a bit unfortunate.

“But like I said, everybody else was really strong from the weekend, so being on pole [teammate Takuma Sato] and being on the podium backs up the kind of form we know we have on superspeedways.”

Asked specifically if he felt the fuel-mix problem cost him a shot at victory, Rossi said not. “I don't think it helped, but I don't want to take away from what Team Penske did, and Will and Josef. They were very strong at the end, and I don't think we could have trimmed as much as they were. We just didn't have the balance to take that.

“But it certainly wasn't helping. It was putting me in pretty precarious situations in restarts, and I was having to fight my way back through pretty aggressively.
“I was trying, but like Josef didn't have the speed for Will, I didn't really have the speed for Josef. I thought we were pretty strong in Turn 3 at times, but I didn't have enough to really pull alongside, and I think that was truly down to the mixture.

“But that’s racing. That's the way it goes. Like I said before, those two cars were pretty strong, and it was easy to make a mistake behind them, and I knew I had to push really hard to stay in their tire tracks. That's part of what makes IndyCar racing so great.”

Power: “You’ve got to be smart because anything can happen”