Rossi: Winning strategy was decided during the race 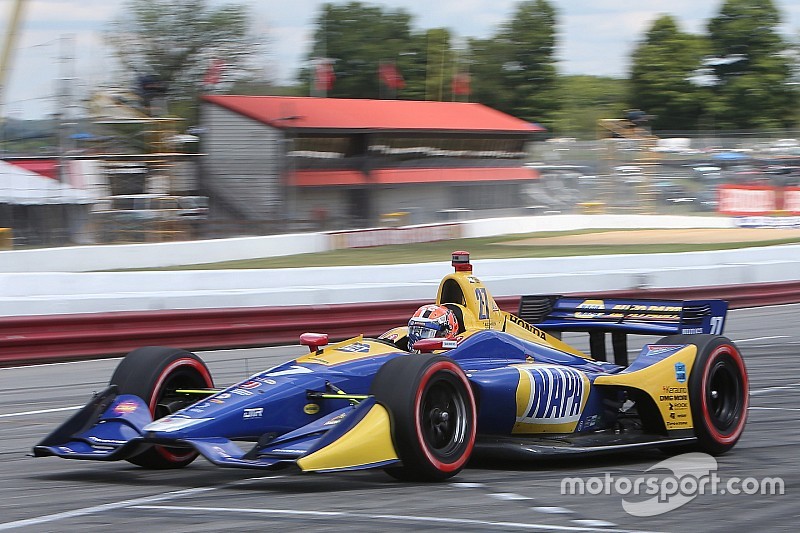 Mid-Ohio IndyCar winner Alexander Rossi admits that his Andretti Autosport team only concluded a two-stop strategy was feasible when they saw his fuel consumption in the opening laps of the race.

Rossi was the sole driver to stop only twice in the Honda Indy 200 at the Mid-Ohio SportsCar Course, and it gave him a huge lead in the final stint that he nursed over the closing laps.

However, Rossi admitted that the strategy was only decided upon by himself and Rob Edwards – his strategist and AA’s team manager – during the early laps of the race once they had observed his fuel consumption figures.

“Without a warmup, you don't know what fuel mileage you're capable of getting," he said. "All of the work leading into the weekend is really focused on qualifying, so you don't really get race mileage information.

"We went into it with the option of doing the two stop if we could hit a fuel number in the first two or three laps. We were able to do that while opening up a gap on Will [Power]. It was at that point that we decided to commit to it.

“It was concerning at times because there were guys who started off trying to do it, then bailed out. They were potentially quicker than me. It's, like, if they pass me, I’d have to bail out as well and lost track position. Or if the yellow comes out… we were exposed for a lot of the race.

“At the end of the day, it was obviously the quicker strategy. It was a huge testament to the pace of the car, as well. To hit the fuel mileage we needed to hit to do it in two stops, I lifted [off the throttle] a lot of the lap. You have to be able to carry a lot of rolling speed, have a balance you're comfortable with.”

Rossi said that the two-stop strategy had to be called early in order to start the fuel-saving immediately, although not knowing if there would be a full-course caution meant the decision was surrounded by anxiety.

“You couldn't try and do a two-stop if you, like, pushed for the first 12 laps. It was really a Lap 2 or Lap 3 thing," he explained. "That's hard to do, especially at the beginning of the race when you don't know what yellows are going to happen. Guys are doing different things, are close to each other, overtaking each other. You have to stay the course.

“I was very fortunate to have Rob Edwards. He’s such a calming voice, a voice of reason, that despite me being frustrated in the first stint in traffic, with Josef [Newgarden] and Will kind of abandoning the strategy, he’s like, ‘We're the only ones doing this, the only ones that can make it happen.’”

Rossi said that he wasn’t surprised that the best of the three-stoppers couldn’t hunt him down after their third stops.