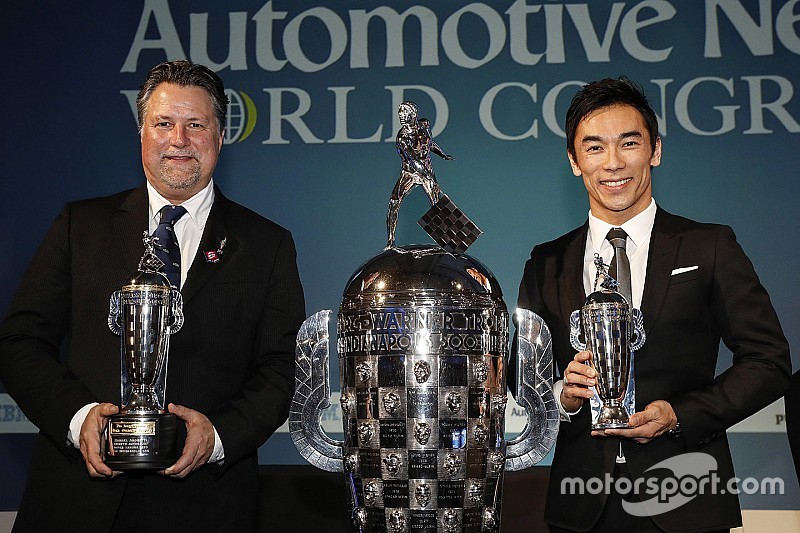 In recognition of their victory together in last year, Takuma Sato and Andretti Autosport team owner Michael Andretti have each received miniature BorgWarner Championship trophies, known as "Baby Borgs".

Andretti told Motorsport.com: “This win was really special in its own way, just like all of them have been. The 100th was really special with Alex [Rossi], because it was the 100th and because he was a rookie. And last year to win it with the first ever Japanese driver to win and with Honda, that was a really big deal and great to be a part of. And also because Takuma is a great guy; I was really happy for him personally, because he did a great job.”

Looking back at the race, Andretti claims he wasn’t worried that Sato would make an error despite intense pressure from three-time Indy winner, Helio Castroneves.

“Honestly, no, I didn’t think he was going to lose his cool,” he said. “I felt he had driven a really smart race, he got super aggressive only when he needed to with that outside pass, and at that point I thought, ‘Oh boy, he’s going to win this race.’”

Andretti, who famously led at the 500 for one more lap than four-time winner Rick Mears but without ever clinching victory there, said that his team’s regular success at the Brickyard is starting to take away the sting of defeat as a driver.

“Yeah, it definitely helps the sting,” he said. “I’ve accepted that I was simply never meant to win as a driver and maybe I am meant to win a bunch of these as an owner. That’s the way things go. It’s not the same sensation as winning it as a driver, but it’s very special in a different way, and it’s more a shared moment.

“When you win a big race as a driver, it’s more personal but the guys around you don’t get the same recognition as you do. When you win it as an owner, you really get to appreciate everybody on the team who helped make it happen, and it’s a proud moment to be part of that and having had the responsibility of putting all those pieces in place. That’s very cool.”

Andretti runs four full-time IndyCars and added Fernando Alonso and Jack Harvey to his roster for the 500 last year, while in 2016, he entered five cars at Indy, with Townsend Bell getting the extra ride. He said the last two years have endorsed his efforts to optimize the team’s chances at the Brickyard by having several entries.

“Absolutely, that’s crucial, no question about it,” he said. “If we hadn’t have had that many cars last year, we wouldn’t have won. We dominated four of our six cars and three of them had problems but we still had one left running at the front and Takuma came through for us. Similar deal the year before.

Asked if he thought his win ratio at Indy as an owner might one day enable Andretti Autosport to surpass Team Penske (16 Indy wins), Andretti said: “That’s the goal. I’ve said that my aim is that by the time they bury me, I want to have more of these Baby Borgs than Roger does. We’re not quite one-third of the way there, we’ve still got a ways to go, but it’s good to have goals, right?”

The ‘baby’ BorgWarner Championship trophies are unique replicas of the iconic Borg-Warner Trophy awarded to the winner of the Indianapolis 500 on Memorial Day weekend. The "Baby Borg" trophies are 14 inches high and weigh 5 pounds, with the driver's version featuring a hand-crafted, three-dimensional sterling silver image of the winner – a duplicate of the image affixed to the full-size Borg-Warner Trophy – while the owner's trophy features a band of art deco race cars accented in gold.

Sato, who beat Castroneves by just 0.2011 of a second last May, accompanied the real Borg-Warner Trophy on a two-week tour of his homeland in December – the first time the trophy, which is valued at more than $3.5m, had been allowed outside the USA. Tonight he told Motorsport.com: “That whole trip was amazing, an honor. It was unbelievable to see how excited everyone was in Japan, but it was also a huge commitment from Honda and BorgWarner to make that happen.”

Despite being 40, he said it did not feel strange to be a pioneer, as the first ever Japanese driver to win the race.

“The thing is, although I was really interested in cars and racing from a very young age, it was a long time before I got a chance to do anything about it,” he reflected. “Starting racing at 20 is very late for a driver these days, so yes, I am 40 now, but I am only just catching up with some younger guys in terms of experience. And hopefully I still have a couple more years at this level.”

Sato said that despite crashing on the final lap of the 2012 Indy 500 trying to pass leader Dario Franchitti, he believed that he could get a similar chance again.

“Well I left that race at least knowing that I could compete with Dario,” he said. “I failed but at least I knew it had been possible to win, and that helped my confidence. Because until you get in that position, you don’t know for sure that you can compete for the win. So figuring out why it went wrong [click here for Taku’s full explanation] was what I needed to do. I knew I could challenge, I just needed to execute better. So that was a great experience for last year.”

Sato paid tribute to his adversary in last year’s race, Castroneves, and said he was delighted that the race wasn’t just history making from a results standpoint, but also featured a classic duel to the twin checkers.

“I have always liked racing with Helio, on any type of racecourse,” he said, “and he is ‘Mr. Indy 500’ these days, I would say. So, I had a lot of good battles with some very strong drivers last year, but those last five laps fighting with Helio were very special, and it was great that we made one of those very close finishes.

“I can still hear the crowd cheering after the checkered flags. That was the greatest day in my career and there were so many people there and around the world to share it. Unbelievable.”

Sato has returned to Rahal Letterman Lanigan Racing for 2018, while Castroneves has become GP Indy/Indy 500-only, having switched to Team Penske’s IMSA sportscar team.

Andretti: 2018 IndyCar is what a “pure” open-wheel car should be