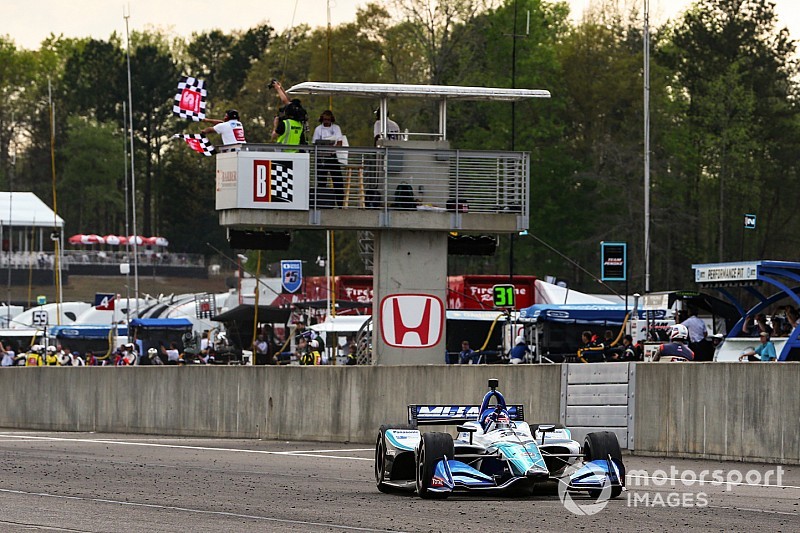 Takuma Sato, who scored his fourth NTT IndyCar Series win at the Honda Indy Grand Prix of Alabama, said that his domination of the event was unexpected – and he wished he could have avoided a late-race off-course excursion.

The 2017 Indy 500 winner led 74 of the 90 laps after taking pole, and was without a true threat after Rahal Letterman Lanigan Racing teammate Graham Rahal encountered throttle issues that hampered him and then ultimately stranded him out on track.

Sato was able to keep fellow three-stopping rival Scott Dixon and two-stopping Sebastien Bourdais at bay throughout the event and won the race by 2.3sec.

“Very happy obviously needless to say,” the 42-year-old exclaimed afterwards. “It's probably the ‘cleanest’ race that I ever won, and again, big thank you to the team. Without their support, we wouldn't able to push this much hard, and I think the engineers did a fantastic job.

“I think we come here with the hopes but honestly… never really expected it to be this much of a domination, to be able to do it.

"But all the conditions and whatever you call it, I think all the environment was really, really helping for us, and today I think showing such a domination, that was a superb feeling. So, I'm just really, really excited.”

Late in the race, Chip Ganassi Racing-Honda’s five-time champion Dixon closed in on Sato while being chased hard by Bourdais’ Dale Coyne Racing with Vasser-Sullivan Honda, and on Lap 85 Sato launched over the Turn 8/9 chicane and skimmed over the sandtrap.

However, he was able to gather it up and rejoin the track without losing the lead.

Sato recalled: “Yeah, obviously Scott was charging hard and also obviously Sebastien. We had about 1.5 to 1.7-8 [seconds], that sort of a gap that I was controlling a bit, but it's never relaxed.

"Outside probably looked easy to win from the cruising and the pole position, but it wasn't really cruising, so I was really pushing hard using push-to-pass on every [corner] exit in the last 10 laps.

"So, it was tough, and I had a little moment into Turn 8… It was not necessary to give the little bit sort of heart attack to the body!

“I thank again, [team owners] Bobby [Rahal], Mike Lanigan and of course David Letterman who decided to fly in this morning after locking up the front row with Graham Rahal. It was great that we demonstrated such a great result in front of him, and very, very happy, very proud of the entire team.”

Sato’s first pit stop was long as the left-rear wheelnut jammed, but although Dixon was able to close the gap, Sato rejoined ahead, proved more than the equal of his adversary, and edged away once more.

Sato suggested that the reason he had pulled a lead in the first stint was to cover just such an eventuality.

“[At the start] we basically stretched the gap between us and the group because… changing a tire, there can be a problem. So, you wanted to have a second in our pocket, and that's what I did, and that's why I started on the brand new red [alternate compound Firestones], and it worked really well.

“Obviously while as a driver sitting in the cockpit and having problem…it took like ages, but it's important to just head down, and you do your job, and you've got to believe that the boys will do an excellent job in the next pit stop, which they did.

“So perfectly OK for me. In races it happens. I make mistakes, too, so I don't blame them. But I think it's important to understand what's happening and make sure we will improve for the next pit stop.”

Sato said he appreciated race director Kyle Novak’s decision to delay the full-course caution when Rahal’s car broke down on the straight exiting Turn 9 and then Tony Kanaan accidentally elbowed Max Chilton into the tire-wall at the pit entrance.

“I think IndyCar did a great job and a great decision to obviously go to yellow because that's a safety issue,” he said. “But the car parked at the exit of Turn 9 was not in a dangerous position, and unfortunately, I think the guy goes into the problem in the pit lane was a little bit dangerous, so I think they brought the yellow after that.

“After that, 30 laps left in a stint, which required a little bit to save fuel, but I think it took three or four laps before the restart which made us a little bit easier in terms of fuel.

“But again, the last 25 laps, Scott and Bourdais were charging, and I was of course saving fuel, but at the same time using the push-to-pass. It was a good challenge, and I think it was fun, so hopefully, the fans enjoyed it.”