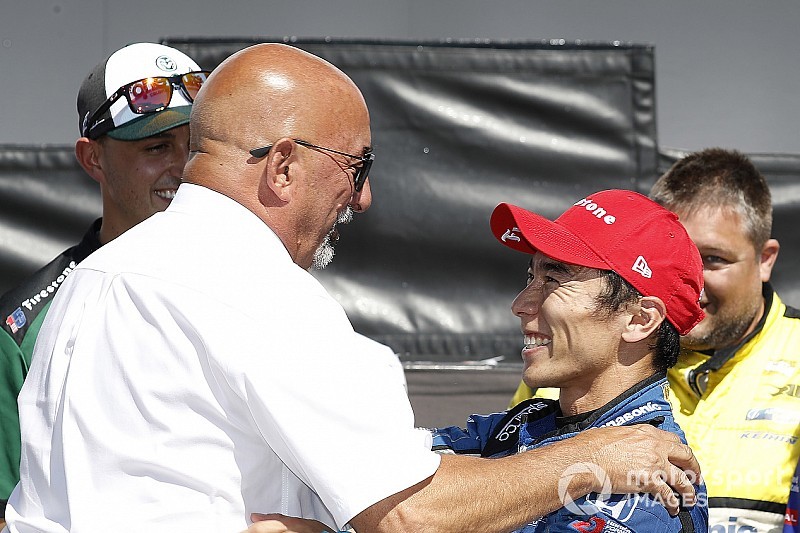 Takuma Sato, winner of the 2017 Indianapolis 500, will stay with the Rahal Letterman Lanigan Racing team for next year's IndyCar season.

Sato joined RLLR for 2018 after Andretti considered a switch to Chevrolet power, and he subsequently returned to the team he had left six years before.

He has won one race this year, rising from the rear of the field to victory in Portland two weeks ago.

“I am really pleased to be back with Rahal Letterman Lanigan Racing for 2019,” said Sato.

“[Team co-owners] Bobby [Rahal], David [Letterman] and Mike [Lanigan] have done a fantastic job at putting together a great team and environment around me. I believe that Graham [Rahal] and I have everything we need to be consistent race winners and compete for the IndyCar championship. I could not be happier.”

Team boss Rahal added: “I’m very pleased that we were able to come to terms to extend Takuma’s contract. He has always been very popular around the team whether he was driving for us or not so, therefore, it makes it even more special to have him continue with us after this season.

"We have had some good success with Takuma and the potential was there for even more. The team has really gelled around him. His guys have done a great job as the season has progressed and of course, Portland showed that.

"It allows us to keep the continuity and good spirit going at the team to try to get even more wins and strong results in 2019.”

Aside from Sato’s win, RLLR has had a challenging 2018, Rahal is eighth in the driver standings and Sato is three places further back.

RLLR has also considered a third car for next season to add to its existing line-up of Rahal and Sato.