Palou converted a two-stop strategy into a maiden IndyCar victory on his first racing appearance at Ganassi –- having joined the team from Dale Coyne Racing to replace the McLaren SP-bound Felix Rosenqvist.

His pace in the opening stint caught the attention of a number of drivers as Palou opened a large gap up to Penske's Will Power, and although Power later hunted down Palou in the dying stages of the race, the ex-Super Formula driver had enough in reserve to secure victory.

Third-place finisher Dixon paid tribute to Palou's pace during the IndyCar season opener, and anticipated a battle throughout the season between the two within the team for supremacy.

When asked if he had expected Palou to win so soon, Dixon said: "It's hard to judge that, I think, just for the sheer fact that there's so many great teams, especially when you get to the first few races, it's hard to solidly know.

"But his speed has been really good in preseason testing. We like a lot of similar things, the three of us, so it was good to see three CGR cars in the Fast Six.

"I'm not sure that's ever happened for us, so that was really good for us.

"But last year, even his podium at Elkhart was a pretty big effort coming through the field and what he did there and some of the speeds you saw with the team in his first season and last season for any kind of rookie was very tough. You hardly got any kind of track time.

"He turned up strong and it was the first one of the season. You can't start a season any better than that, and just feel real happy for him and the 10 car team, and it's definitely going to be a hell of a fight." 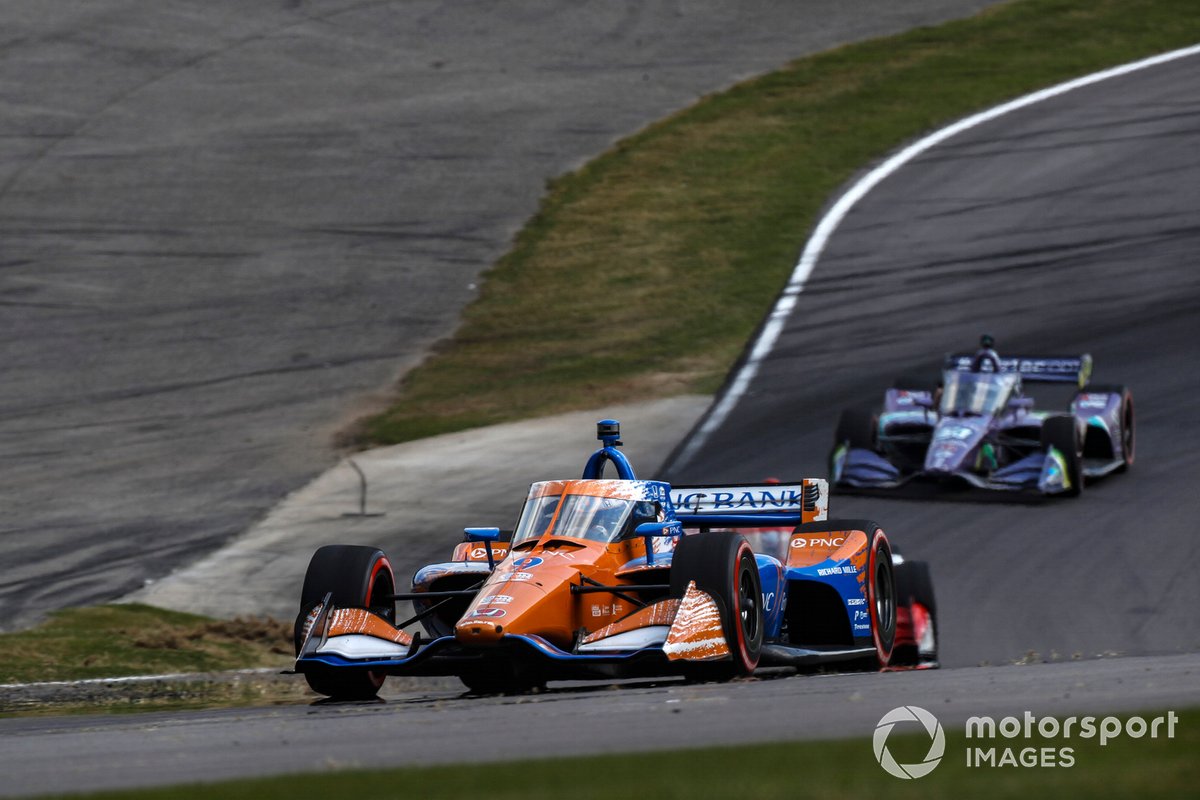 Dixon explained that Palou was also willing to learn from the more experienced drivers within the team, adding that he was a "super nice" presence within the Ganassi camp.

"It's great to see somebody that's easy to work with," Dixon said.

"Some drivers that we all get to work with can be somewhat difficult, but he also is extremely willing and wanting to learn, asks a lot of questions, sends a lot of text messages to try and just do a better job.

"He's been a real pleasure to work with through these times, the same with Marcus [Ericsson] throughout the season, obviously Jimmie [Johnson], as well."

Among the other Ganassi entries, Ericsson factored within the top four until he fell down the order as he had to began to save fuel, while Johnson was classified three laps down in his first IndyCar appearance.

The seven-time NASCAR Cup champion did well to pick his way through the fracas on lap 1 instigated by Josef Newgarden's slide off-track, but later spun at Turn 12 having been caught out by the wake of the passing Rinus VeeKay and required an engine fire-up after stalling.