Montoya, Saavedra and Andretti Autosport rookie Carlos Munoz give Colombia three drivers in the series, and each referenced a fourth as a possibility for the opener.

Sebastian Saavedra credits countryman Montoya with having an indirect hand in his path to reaching the IndyCar Series.

"I was only 8 years old when he won Indy 500. I was just starting my go-kart career then," said Saavedra, who embarks on his first season with KV AFS Racing. "It surely gave a little bit of, 'Hey, if you're a Colombian, you can make it happen.' Since then we've had a couple of contacts. 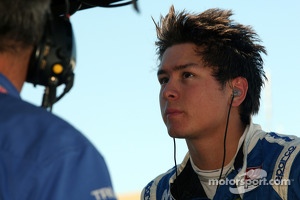 I raced in the 500 miles (karting race) of Brazil. That was actually the first time we got to speak. I was 13. Since then we never spoke again until the Race of the Stars at the end of the year, when we became a lot closer.

"I do accept that he's one of those guys that came through on a very important time of my life, thinking, 'Is this what I want to do for my whole career?' And it was, and of course, Roberto Guerrero was another guy that came through on my first Indy 500 (in 2010). I've been very blessed with very good people around."

Montoya, Saavedra and Andretti Autosport rookie Carlos Munoz give Colombia three drivers in the series, and each referenced a fourth as a possibility for the opener.

"A lot of people are going to follow IndyCar in Colombia," Munoz added. "People are starting to talk a lot that there are three Colombians in INDYCAR. When (Montoya) won the Champ Car title and the Indy 500, there were a lot of people following him. He was a symbol for me when I was a kid, an example for me and many Colombian drivers, to follow him. I have some pictures of him when I was small. He was at a go-kart race with his brother when I was small. It's a strange feeling when you're small, you're looking at him as a big driver. But once I'm here, you just put your helmet on, everyone is the same."

Munoz to sub for Wickens at SPM in Portland, Sonoma