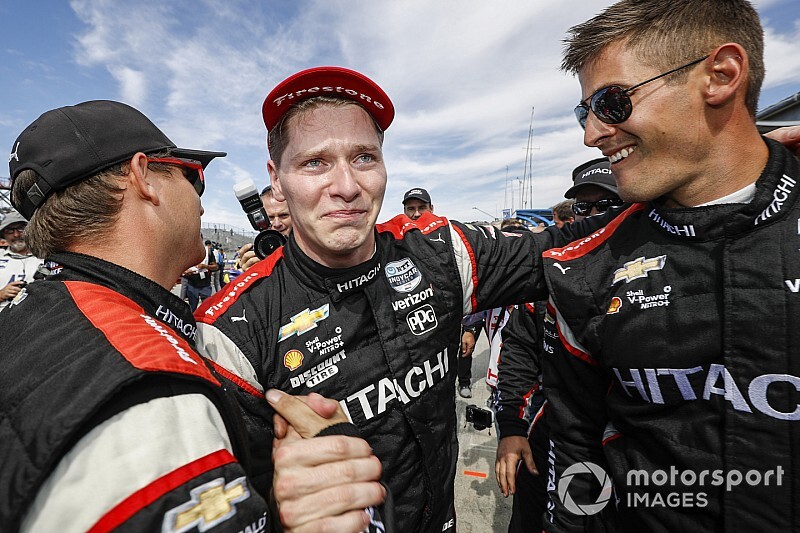 2019 NTT IndyCar Series champion Josef Newgarden says that his tears and emotions on his final lap and in pitlane at Laguna Seca were because he appreciates his second title more than his first in 2017.

Newgarden had a difficult run to eighth place, driving an uncharacteristically cautious race with a car that he found inexplicably handling poorly.

But capping a season in which he scored more wins than any other driver, showed far greater consistency than in 2018, and made fewer mistakes than even in his previous championship season, he came into the Firestone Grand Prix of Monterey with a 41-point advantage over Alexander Rossi and a 42-point advantage over his own teammate Simon Pagenaud.

With Pagenaud fourth and Rossi sixth in this double-points finale, Josef’s eighth place was enough to see him beat Simon by 25 points and Alex by 33.

“I don't know why, but it feels more special,” said the champion afterward, whose supporters on pitlane included his 80-year-old grandmother from Denmark. “It really hit me. It just really, really hit me on the in-lap. I don't know why. I was just so emotional.

“I didn't quite get that way in the first one. I don't know if you don't have quite the respect for it or what it is… [Second time around] You just have more perspective on how difficult it is.

“When you're in a season, those opportunities [to win] come every single week, but to win a championship, that doesn't come every week. That opportunity seldom is there, and if it is there, you really want to capitalize on it because you never know if you're going to get that again. I think you really realize that the more years you do this.

“I think this one just felt like it was more ours to lose. It was more ours to give away. I thought it was our year to win, and if we didn't, it was just going to hurt a lot. Just the effort would have been… not for nothing, but it just would have felt pretty bad to throw away what we had put together all season.”

He later added: “I don't ever cry. Actually, it infuriates my fiancée because I don't think I've ever cried in front of her. It disturbed her in some ways. She's like, ‘You never cry, which is really… I don't know why you don't do that. You should cry at some point.’

“[This] was a good cry. It just felt like a big weight, to be honest with you. I still feel it when I think about it now. It's just a big weight. Especially when I saw all the guys when I got out. It meant a lot. It still does. It means a lot.”

That “weight,” admitted Newgarden, meant that the weeks since Portland, when he finished fifth to Rossi’s third, had been tough.

“I've been dreading the last couple weeks because I don't think it really hits you until you get finally to Laguna or after Portland I should say, because then you really realize the points situation.

“It's just such a stressful deal with double points. I hated it. I hated thinking about it, and I know we didn't build up enough of a gap to make it super easy on ourselves… Just didn't know what was going to happen today, and I just wanted to make sure we secured the championship because I felt like our guys deserved it.

“That was weighing on me a lot. I was just happy we were able to get through today. It was kind of a chaotic event.”

“I think we encountered a problem today”

Regarding his underwhelming drive being un-Newgarden-like, the new two-time champion responded: “Man, you're telling me! During the race I was like, ‘I don't like this. I don't like the way I'm running this race.’

"But today was the championship day. I felt like we were going down a rabbit hole and it was just the wrong place to be going because I could see the writing on the wall and where it was headed.

“I was doing one thing – my goal was to shadow Rossi, and that's either going to be in my favor or it's not. And it looked like it was coming out of that favor, that sort of strategy. But I had to stick to the plan. Our goose was kind of cooked after the first stint. It was like, ‘Look, you've made your bed, this is what it is.’

“I do think we encountered a problem today, though, and I don't know what happened. My first stint was very good. The car felt normal. Rossi was really slow in front of me towards the end [of the stint], and I was just doing my game. I was shadowing him. I was nervous he was going to wreck me if I tried to pass him. It sort of seemed like it.

“But then the second stint, as soon as I went to black [harder primary Firestone] tires, it was like something just happened. It was like we dropped a bunch of downforce or a shock went out or something like that, and I was really struggling with the car. But I was still keeping with my objective to shadow Rossi to the finish.

“So I think something might have been going on there. I don't know what it was. But I also think the way the strategy was starting to fall – really Rossi's strength is what was hurting us. He wasn't very strong, either, and because I was following him and just trying to match where he was, it was kind of dragging me back at times.

"I think in the first stint we could have made a lot more hay. I think we could have passed him and just been up the road in a very different position.”

Told that Rossi had said that the right guy won the championship, Newgarden replied: “I think that's very kind of him to say. I think we were all very deserving. I think Alex has had a tremendous year. He's certainly a tremendous competitor, very talented, very skilled at what he does, and he has a great organization behind him, too.

“So you've got to respect the competition, and I think we've had incredible competition between him and Simon and Scott and Will. Those five guys have really been the core people I think at the top of this championship, and I think they were all deserving in a lot of ways to win the championship.

“I think we've had the most consistent year. I think I really do believe we've put together the best championship run, and I'm glad that found its way to sealing the championship.In a lot of ways, under the traditional points system, this would have been kind of a done deal.

"But it becomes a lot more exciting, and it obviously mixes things up with double points. That's where the wild card kind of comes in.

“The only thing I would say is I have a tremendous amount of respect for Rossi and his skill and his organization and what they've done. They're fine competitors. They're very difficult to beat every week, and that's what you want. Hats off to them for running just as strong of a season I would say.”

Herta: When you win an IndyCar race, it has to be a perfect race