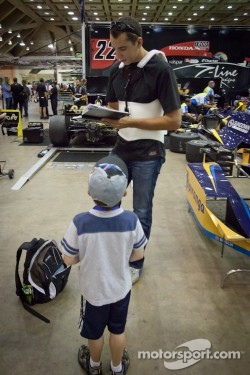 1. INDYCAR Stars headline Rolex 24 at Daytona: Justin Wilson says the fractured vertebrae he suffered during an IZOD IndyCar Series practice session in August at Mid-Ohio Sports Car Course is but a distant, albeit painful, memory.

The IZOD IndyCar Series race winner will return to competition this weekend in the 50th anniversary Rolex 24 at Daytona. Wilson, who's anxiously waiting to wrap up his IZOD IndyCar Series deal for 2012, will co-drive the No. 60 LiveOn.com Daytona Prototype with AJ Allmendinger, Oswaldo Negri and John Pew.

"It was a long six months. It was frustrating; you want to get back in the car," said Wilson, who competed in 11 events (best finish of fifth just five days before the practice incident) for Dreyer & Reinbold Racing in 2011.

Wilson, who was recently cleared to drive by INDYCAR medical officials, says he's fit for the rigors of multiple driving stints on the 2.56-mile, 12-turn circuit in the Michael Shank Racing with Curb/Agajanian car.

"To take it easy; that was the only prescription," he said of the recovery and rehabilitation. "About five weeks they said I could start to swim and I just built that up, and at about 12 weeks I added cycling. I was fortunate that there was no surgery so that made life a lot easier. I just had to concentrate on getting the movement and strength back and make sure I don't damage anything in the meantime."

Michael Shank Racing's best finish in the event (second place) came in 2006 with Wilson, Allmendinger, Negri and Mark Patterson co-driving. Of course, drivers and the team principal believe they have a great opportunity to climb one step on the podium.

"The key is working out some of the changes we made and making sure we really understand and know what we're doing," Wilson added. "The conditions change so much. Obviously, the middle of the night is much colder than the middle of the day so it's just getting a good handle on that so we can attack in every condition and situation and I think we've made some good changes on the car that allows us to do that."

"We're as ready as we can be and we're eager to get going," said Shank, whose MSR Indy team is expected on the grid of the IZOD IndyCar Series season opener March 25 in St. Petersburg, Fla. "I'm very proud of the effort this whole team has put in, and I'm very excited about our chances this year. We've got an exciting line up of guys, and we know that this race will be as much about performance as it will be about patience."

Other IZOD IndyCar Series drivers competing in the Daytona Prototype class are Scott Dixon and Dario Franchitti in the No. 02 Chip Ganassi Racing with Felix Sabates car, Ryan Briscoe in the No. 10 SunTrust Racing car and Paul Tracy in the No. 77 Doran Racing.

James Hinchcliffe, the 2011 Sunoco Rookie of the Year, will compete for SpeedSource in the No. 70 Mazda RX-8 in the GT class. Raphael Matos will co-drive the No. 62 Ferrari 458 for Risi Competizione.

"It's a fun weekend," said Franchitti, the four-time IZOD IndyCar Series champion who is among three Indy 500 winners competing this weekend. "You try not to take it too seriously, then you take it seriously when you get into the car."

Under terms of the agreement, HPD will provide its new, turbocharged 2.2-liter Honda Indy V-6 engines to all Coyne entries in the IZOD IndyCar Series and at the Indianapolis 500.

"Dale Coyne Racing has been one of IndyCar's most durable teams, with a history that extends for nearly 30 years." said Erik Berkman, president of Honda Performance Development and vice president, corporate planning and logistics, for American Honda. "It's great to have them racing with us in 2012. Dale's team has made great strides in recent seasons, and he has made moves this off-season to further improve. We're looking forward to continuing our association with him in 2012."

"We have felt a part of the Honda family from their first days in CART back in the early 1990s till today," commented DCR team owner Dale Coyne. "We are very pleased to enter this next stage of IndyCar history with a company so dedicated to winning and rich in successful motorsports heritage like Honda. Together we hope to accomplish great things in 2012."

3. Hunter-Reay's fishing excursion benefits Racing For Cancer: Ryan Hunter-Reay participated in the Florida Fish for Life/Buccaneer Cup over the weekend in the Atlantic Ocean off Palm Beach, Fla. The annual event raises awareness of colon cancer through sport fishing, and Racing For Cancer was among the fundraising beneficiaries this year.

Hunter-Reay, who enters his third IZOD IndyCar Series season with Andretti Autosport, is the Global Ambassador for Racing For Cancer -- a registered 501(c)(3) organization that was formed to unite motorsports fans around the world to help those afflicted with cancer and to promote early detection and prevention initiatives that support the global fight against cancer.

4. Of note: Banana Boat sun care announced a partnership with Chip Ganassi Racing Teams in which it will sponsor the car of Target Chip Ganassi Racing driver Dario Franchitti during the 2012 season. As part of the partnership, Banana Boat sun care will host fan experiences at the Indianapolis 500 Mile Race…Attendees of the Canadian Motorsports Expo on Feb. 10-12 at the International Centre in suburban Toronto will have an opportunity to see the new IZOD IndyCar Series car at the Honda Indy Toronto booth. ... Andretti Autosport Star Mazda Championship driver Zach Veach of Stockdale, Ohio, used four race wins and four pole positions to capture the Formula Car Challenge presented by Goodyear Winter Series championship for the second consecutive year. … Chip Ganassi Racing is featured in the January issue of Professional Pilot magazine. The team owner utilizes a Citation X and Learjet 35 from the base at Allegheny County Airport near Pittsburgh.